Scrambling to finish up your bracket for the 2014 NCAA Tournament? Here's one bracket, with the logic (or lack thereof) behind each pick.

Congratulations, the week has worn on and we've made it to two of the best days of the sporting calendar - the first round of the NCAA Tournament.  Over 48 hours, 32 games eliminate half the field, with as many as four games running simultaneously toward the end of one team's season at many points throughout the day.  It's the best.

It's also the day that Americans get up from their computers and agree to socialize with their co-workers for the sole purpose of organized gambling and office bragging rights.  That's right - for a few great weeks our corporate overlords (love you, SB Nation!) allow us a brief respite from their rules and regulations by tacitly allowing (or in some instances, outright endorsing) bracket challenges.

So for you, the goal here is to of course dominate these challenges, with two important reasons - (1) showing your co-workers your superiority to them in the way God intended - NCAA predictions; and (2) Suzy's braces aren't going to pay for themselves, are they?

With all that in mind, here's my crack at how you should enter your NCAA Tournament picks.  Remember, we guarantee these picks will win and you can ask us for your money back if they do not win by e-mailing Meetmeattapps at garnetandblackattack dot com backslash LOLNOPE. 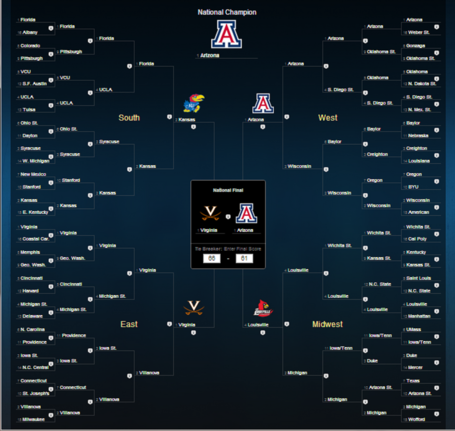 So we're going against the Gators, though no one faults you for choosing Billy Donovan's group to get out of this bracket, or indeed to win the whole damn thing.  They're an outstanding basketball team.

But I'm going with Kansas, for a couple of reasons.  First, Florida's insanely popular in bracket pools this year - right now, 62% of people are picking them to get to the Final Four at ESPN.  You have a far better chance of winning your bracket by going against the popular trend, because there's a higher likelihood you'll win your bracket (you have a better chance of winning the whole thing if you and one other person have Kansas and 10 people have Florida, even if Florida's more likely to win that particular game).  Second, the Jayhawks may get Joel Embiid back from injury, and if they do, they may be better than Florida.  Even without him, they're a very good basketball team.  They may not be the most likely to advance, but they're good value here.

Elsewhere in the region, there's not a lot of great upset potential in the first round.  Have your pick in the 7/10 game, but take the far superior Pitt Panthers over Colorado in the 8/9.  I love Brad Underwood and Stephen F. Austin, but I don't think they can run with HAVOC.  On the other side of that pod, UCLA's been great this year when at full strength, and Tulsa isn't a particularly powerful 13 seed.

In the bottom half, Ohio State and Syracuse are deserved favorites, but take the Orange to get to the Sweet 16 against one of the weaker squads Thad Matt's put together in Columbus.  It's a lot of chalk, but good seeding leads to chalk brackets.

I took Virginia in this bracket primarily because they're relatively undervalued - more people have Michigan State advancing to the Final Four than the Cavaliers.  Michigan State is great when they have everyone together, but so is Virginia - they've ripped off two wins over Duke and a victory over Syracuse in recent weeks.  Michigan State had everyone earlier this year when they dropped a game against North Carolina, so let's not pretend they're indomitable.

As for the lead-in games, take whoever you like in the 8/9, and perhaps even the 5/12, though I think Cincinnati will be too much inside for the Crimson.  On the other half of the bracket, it's a bit of a crapshoot everywhere - any of the four teams in the 3/6/11/14 pod could come out, but I'm going with Iowa State based on their lack of reliance on 3s.   Also, given the closeness of the 6/11 game, sometimes in these sorts of pods its best to take the team most likely to make the Round of 32 and hope they keep going.

Given the difficulty of that pod, I took Villanova through to the Elite Eight.  UConn is good value to beat St. Joseph's in the first round, but I'm not sure they can score enough against the Wildcats to get through the second round.

What a mess.  It's hard to make a "bad" pick in this bracket because so many of these teams can do damage and it'd be hard to call it a surprise.  Except, love you Terriers, but you aren't getting out of the first round against Michigan.  That would be a bad pick.

I like Louisville to come out of this because they have the second-easiest path to the Sweet 16 of the four top seeds, and I don't trust Michigan.  Wichita should get past either Kentucky or Kansas State, but I'd be leery of them after that.  There's too many minefields in their path to put them in the Final Four.  I did take Kansas State because Kentucky's far more popular than they deserve to be, but your mileage may vary on the 8/9 game.

I hate N.C. State's inclusion in the bracket, but they're here, and St. Louis has been a mess lately.  That said, the Pack won't get past Louisville, the best team in the bracket and the team I'm taking to the Final Four.  Neither of these first two games should trouble the Cardinals too much.

On the other side, I like Tennessee to get to the Sweet 16.  The Vols have been undervalued all year, and if 3s aren't falling, Duke can be beaten, especially by a team like Tennessee that will pound them on the inside offensively.  If Iowa wins tonight, I'd go Duke there though.  That said, again because of the ease of path, take Michigan to the Elite Eight because they're the most likely to be there, not because they're the best team.

The West seems the simplest region to me, but that depends on what you think of Arizona since the loss of Brandon Ashley.  I still think they're the best team in the nation - or at least one of the top five - and the least flawed of any in this bracket.  While they'll have a very challenging game in the second round whether its Oklahoma State or Gonzaga, the coin-flip nature of that game makes it impossible to take anyone other than the 'Cats in the Round of 32 (though it does make me nervous about taking them in the championship).  If you're looking for an upset, North Dakota State is as good a choice as any, but I'll take chalk through the 4/5/12/13 pod, premised solely on these are the best teams in each match-up.

On the other side, Oregon-BYU isn't a very strong 7/10 game, so I've got Wisconsin through to the Sweet 16 based primarily on the lack of a quality option otherwise.  In perhaps the biggest "upset" of my bracket, I also took Baylor to get out of their pod because Creighton simply can't stop them on the interior post with Isaiah Austin and Cory Jefferson.  Creighton's lights out from 3 and could easily overwhelm Baylor, but if they go cold, it's good night for the Bluejays.

I'd want Wisconsin over either Creighton or Baylor to get to the Elite Eight, which made that easy enough, and still think Arizona's the best team in the bracket, which puts them in the Final Four.

Here, take your preference as you like.  I went with Virginia and Arizona because (1) I think they're the better team in each match-up, and (2) only 7% of people in ESPN are taking the Cavaliers into the finals, even though there's a decent chance they won't play a team that's better than they are until at least the Final Four (again, this depends in part on your opinion of Michigan State).

That would be a relatively defensive final, but I'll take the Wildcats to go all the way.  Arizona's four losses have been by 2 at Cal, in double overtime at Arizona State, by 7 at Oregon, and by 4 in Las Vegas to UCLA.  They had a too-close-for-comfort win over Drexel (4 points) earlier in the year in New York City - where they also beat Duke, mind you - but generally speaking they've shown up every single time they've taken the court and played well, many times extremely well.  Virginia's done the same, and would be a fine choice for anyone looking to take a surprisingly under-picked one seed to win this thing, but ultimately, I think Arizona's been the best team in basketball this year.  That seems like a hill worth dying on.

What picks do you agree with?  Disagree with?  And just how much money do you stand to win based on this sound advice?