The senior plays his final game at the Colonial Life Arena on Tuesday evening as the Gamecocks welcome the top-ranked Florida Gators to Columbia for their final home contest of the season.

If you say you expected this from Brenton Williams, you're either related to him or a liar.

Williams took a circuitous route to South Carolina.  After three years as a starter for Osceola High School in Kissimmee, Florida, he rejected opportunities to play Division I basketball at Florida A&M and Bethune-Cookman to take his game to Santa Fe Community College in Gainesville, where he hoped to garner interest from more-established programs.  He did, but perhaps not to the degree he hoped - he selected South Carolina over relative lightweights in the college basketball world - Marshall, Louisiana Tech, and UCF.

Williams arrived in Columbia based in part on a need for the Gamecocks at guard, given that Bruce Ellington decided to play football as well as basketball beginning in 2011 (that worked out pretty well).  And on Tuesday night, Williams will stand alongside Bruce - who will also be honored on senior night - and be applauded for what became a surprisingly excellent three year career at South Carolina.

Brenton joined Carolina for what became the final year under Darrin Horn, a 10-21 (2-14 in the SEC) embarrassment, despite the presence of two top 100 recruits in freshman Anthony Gill and sophomore Damontre Harris.  Despite the absence of Ellington, Williams struggled for playing time in the non-conference portion of the schedule, blocked by heavy minutes that went to Damien Leonard, Brian Richardson, and Eric Smith.

Unfortunately for the program, that group struggled mightily without the two seniors that will stand center court on Tuesday, as the team lost to Elon and Tennessee State in their second and third games of the season (with a near miss in the fourth against Mississippi Valley State).  The Gamecocks went  2-14 against teams ranked in the top 100 per Ken Pomeroy's ratings, with only upsets of Clemson and Alabama representing the high points of a very low season.

Williiams started seeing meaningful minutes around the turn of the new year, and it didn't take long for him to produce offensively.  Against Florida, he scored 9 points in just 14 minutes of action, and then 6 more in just 9 minutes against Auburn.  After a quiet outing against Alabama, Williams poured in 15 points in 27 minutes against Ole Miss.  It became clear quickly that when Brenton Williams is on the court, he gets shots and gets points.

Throughout the rest of the season, he played regular minutes off the bench and typically scored one point for every two minutes of action he saw, a pretty nice clip.  It didn't lead to a lot of wins in 2011-12, but it certainly led to folks increasing expectations for what he could do.

As we all know, he wouldn't do it under Darrin Horn.  After Horn left, the Gamecocks briefly flirted with Gregg Marshall before turning to their current head coach - Frank Martin.  The question then became how would Martin's coaching style mesh with Williams' playing style? 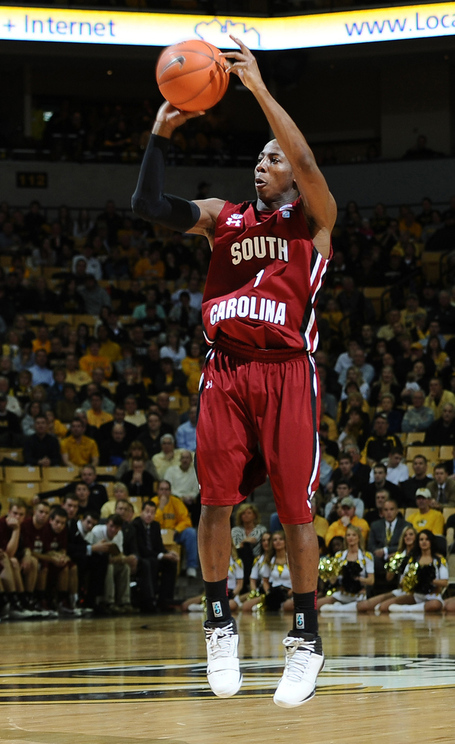 The 2012-13 season represented a second struggle for the Carolina program, yet Brenton Williams took a step forward in his offensive production.  In 21 minutes a game, he scored 11.0 points per game (or 20.9 points per 40 minutes, ranking 101st in the nation among all players) and remained a steady presence on the offensive end, increasing his assists up to 1.4 per game (from 0.5) while holding steady on turnover percentage (14.9% of his possessions).

However, he spent large stretches of the season outside the good graces of the coaching staff, which he frustrated for his perceived defensive weaknesses.  After playing double-digit minutes in every non-conference contest, the Gamecocks opened SEC play with the recently returned Bruce Ellington, who immediately usurped most of Brenton's playing time.  That led to two frustratingly close losses for Carolina against the dredges of the SEC - a 54-52 loss at Mississippi State and a 74-71 home loss to Auburn - where Williams only saw six minutes of action in each contest.

The next time out Martin wildly changed his tune, and Brenton saw 36 minutes against LSU in a 82-73 win in Baton Rouge, where he scored 16 points.  He'd score 16 a piece against both Vanderbilt and Missouri in the next two outings but in February saw another two-game period where he played just three total minutes in losses to Tennessee and LSU.  But again Martin saw the need for Williams, and again he responded, culminating in an amazing two-game stretch to end the regular season - 38 points to lead Carolina to a 79-72 win over Mississippi State in Lakeem Jackson's final game, and 17 points in a 74-64 loss at Vanderbilt to end the year.

Williams finished the season with an offensive rating of 119.8, which ranked 26th in the nation for players that used at least 20% of their team's possessions, sandwiched just between outstanding players like P.J. Hairston and Cody Zeller (though each of those guys used far more possessions, and the more possessions you used, the less effective you are and the less easy it is to be effective).

Yet, because of defense, he nearly transferred in the offseason as part of the exodus from Columbia.  However, because of his offensive prowess, Williams stayed and became a leader by necessity for a young 2013-14 team with seven freshmen and only one other upperclassman, transfer Tyrone Johnson.  Carolina needed Brenton Wiliams to step up and deliver.  And step up he did. 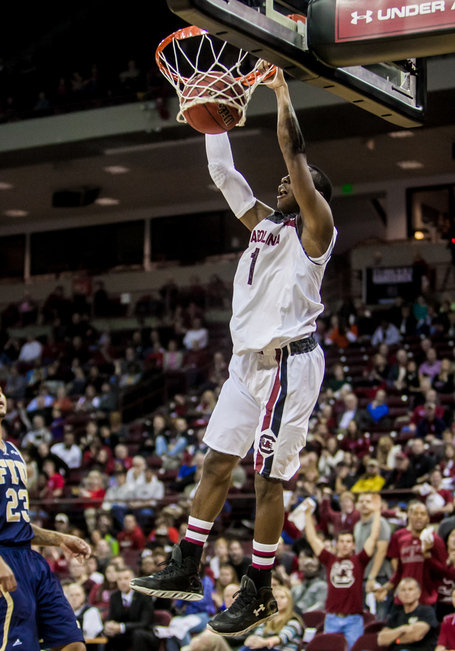 By the time the fall of 2013 came around, Brenton was established, and he came out ready to go for the season.  He scored double-digit points in Carolina's opening games - a win against Longwood and a close loss to Baylor - before going cold against Clemson, scoring zero points.  After a bounceback against FIU - 16 points in 18 minutes - Martin again found fault with Williams, playing him only eight combined minutes against Oklahoma State and Manhattan, both losses.  It seemed a turning point in the senior's season, and career, in Columbia.

It turned well for both the guard and the program. Williams earned his first start of the season in the team's last game in Hawaii, a 69-59 win over Akron.  That game marked the second game in an eight-game streak of double-digit points for Williams, and Williams hasn't scored less than 8 points in a game since that zero in 6 minutes against Manhattan.  Whatever stopped him and Frank Martin from getting along, the two got over it, and Williams went ham.

While the conference season hasn't gone as anyone associated with Carolina would've hoped, it's been a revelation for Williams.  He scored 32 points in an 82-74 loss in Missouri, 23 in a tough loss in Oxford, 29 and 26 more in losses against Auburn, and 29 points in - you guessed - a loss to Arkansas.

But the two weren't correlated - South Carolina certainly wouldn't have been more likely to win any of those match-ups had Brenton not played as well.  He was simply a lone senior - like Malik Cooke and Lakeem Jackson before him - that was a good enough player to contribute to a good team, but unfortunately didn't have a good team around him.  Yet, Brenton and the Gamecocks persevered, and in his second-to-last home game, he poured in 24 points to lead South Carolina to an upset over the 19th-ranked Kentucky Wildcats.  Not a bad penultimate outing.

His final home game comes against the top-ranked Florida Gators, and it's asking a lot for his teammates to send him away victorious.  Yet, despite the talent disparity across much of the floor, there won't be one at the two-guard spot.  Williams ranks second in the nation in offensive efficiency this year among players that use at least 20% of their team's possessions (and 13th overall), ahead of players like the injured Spencer Dinwiddle of Colorado, Aaron White of Iowa, and Nik Stauskas of Michigan, all of whom also use between 20-24% of their team's possessions.  That's what happens when you hit 95% of your free throws to go along with shooting 43% from 3 and committing turnovers at one of the lowest rates in basketball (on just 11% of his possessions, 121st in the nation and behind mostly players that only shoot spot-up jumpers).  Against a strong schedule, Brenton Williams shined this year.

The game tips off at 7pm on Tuesday evening and can be seen on ESPNU.  Las Vegas favors the Gators to win by 12 points, and the money line (-800 for Florida, +600 for Carolina) suggests that Carolina has a 14% chance of winning.  But as we all were reminded on Saturday, and as we all may recall from last year's Senior Day, if Brenton Williams gets going, anything can happen.