Share All sharing options for: Stephen Garcia on his Arena Football League debut with the Tampa Bay Storm

It had been nearly three years since former Gamecocks quarterback Stephen Garcia last put on pads and took a snap under center. The hiatus came on March 1, 2014 when Garcia made his Arena League debut for his hometown Tampa Bay Storm, who traveled to the Jacksonville Sharks in their first preseason game of the 2014 season. Garcia came off the bench, completing seven of 15 passes for 78 yards and a score in a losing effort. The Sharks defeated the Storm 42-35.

We spoke with a rejuvenated Garcia about his recent debut and what it felt like to get back on the field and do what he knows best. "I was a little nervous, but I was anxious to get hit again and knock off the cobwebs," said Garcia. "Playing in Jacksonville, the crowd was actually quite loud but it felt great and it was an awesome experience."

I didn't want to regret anything in years to come for not giving it my all and trying to make my dreams come true of one day playing in the NFL. -Stephen Garcia

Garcia realized quickly that the speed and tempo of the Arena Football League is a little more demanding than what he is used to. "It is without a doubt a lot faster," said Garcia. "I mean, the field is only 50 yards long and 25 yards wide. It's on hyper-drive! It's taking time for me to get used to it, but with practice and increased reps, I am getting accustomed quickly."

Garcia has found that learning this new style has come a little easier from the hands of an unlikely source. He credits the Storm's incumbent starting quarterback, Randy Hippeard, for helping him make adjustments to give Tampa Bay the best chance to win. Garcia and Hippeard are locked in a close battle to challenge for the starting job.

"He's been helping me as much as he can. He's a veteran in this league and I'm a rookie trying to learn as much as possible, as quick as possible so that I can be ready to go whenever I get the call," Garcia said.

The adjustment has been a little easier in Tampa as Garcia has found himself linked up with former teammate at South Carolina and fellow 2007 recruiting class member Joe Hills. Hills has established himself as one of the premiere wide receivers in the Arena League. He lead the team in 2013 with 133 receptions to go along with 1861 yards and 42 touchdowns -- good for third in the league.

Hills is recovering from off season knee surgery, but Garcia is taking advantage of every opportunity he can get with his college teammate. "Joe hasn't been able to practice yet this season, but I throw with him every day after practice so we can build some sort of chemistry," said Garcia. "He's one of the best wide receivers in the Arena League and had a phenomenal year."

While Garcia became intrinsically linked to the No. 5 jersey when he was playing in Williams-Brice stadium, he donned the No. 12 for the first time in his career Saturday. Garcia insists that's not a permanent thing. So don't line up get your No. 12 jersey quite yet. "The No. 12 was just for that game, or so I'm told," Garcia says with a laugh. "I put in my request for No. 5 and should be wearing that next week for the season opener." 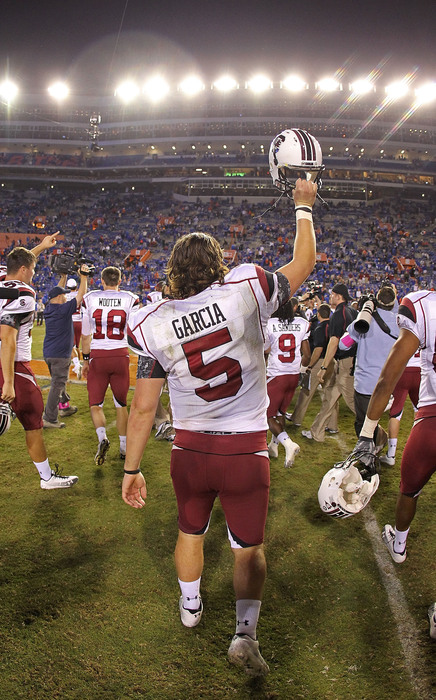 After he left South Carolina on less-than-ideal terms, Garcia maintained hope that one day he'd be able to have the opportunity to fulfill his lifelong dream of playing professionally. After a short stay with the Montreal Alouettes and battling injuries during the 2012 season, Garcia returned home to reevaluate his options and take a step back.

He spent the next year with his family back in Tampa and privately trained young quarterbacks while also working at a law firm. Eventually that itch came back and Garcia didn't want to look back down the road and wonder what his career could've been if he didn't at least give it a try.

"I just didn't want to look back years from now and wonder, 'What if?' I didn't want to regret anything in years to come for not giving it my all and trying to make my dreams come true of one day playing in the NFL. I see a bunch of guys floating around the league and all I want is a shot in camp somewhere. It all starts with the Storm this year and I am very grateful for the opportunity."

The next step on Stephen Garcia's road to the NFL comes when Tampa Bay takes on the San Antonio Talons. The Storm open their season in Texas on March 21 with Stephen Garcia potentially taking the field as the starting quarterback.