Two of these three people are wearing facial expressions, and the one who isn't gets paid to convey human emotions.

Share All sharing options for: Victor Hampton and Chaz Sutton met Nic Cage in New York City and it was weird

Victor Hampton, Chaz Sutton, Kelcy Quarles, and Connor Shaw are all in New York City right now for some reason. It probably has something to do with the fact that all four are decent bets to be selected in the 2014 NFL Draft, which gets started in just shy of a month on May 8.

Hampton and Sutton appear to be having the most fun, though, as highlighted by their run-in with film star and possible vampire Nicolas Cage. 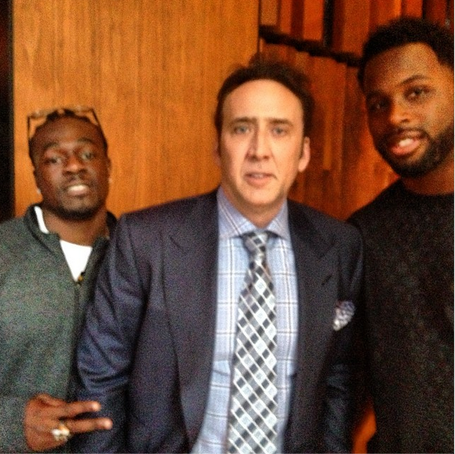 The picture, originally posted by Vic on Instagram, was accompanied by the following caption:

It's worth considering the context in which Hampton and Sutton have likely experienced Cage's work on the silver screen to fully appreciate the awesomeness of this meeting. To be frank, Nic hasn't made very many good movies since Chaz and Victor came of moviegoing age.

Chaz was born in September of 1989 and Vic was born in March 1992, so the first Cage film that they were exposed to and mature enough to understand was probably National Treasure in 2004 or maybe Gone In 60 Seconds, which came out four years earlier when Hampton would have been eight years old. Expecting them to appreciate the wonderful Adaptation at the ages of 10 and 13 is probably asking a bit too much. The first Nic Cage movie released after they were both born was 1992's Honeymoon in Vegas. Vic was negative five when Raising Arizona had its theatrical release.

Now here's a video of Victor Hampton being really proud of riding in an elevator.