You voted on the best players from the past four seasons. We Photoshopped their faces on a mountainside.

Last week, we announced a reader-driven contest that asked: What four players best embody South Carolina's recent run of success, such that you'd be comfortable chiseling them into the program's own version of Mt. Rushmore? The voting extended to any rostered players from the past 14 seasons.  The survey received 1,420 total votes—actually closer to 1,450 but hell if I'm paying $25 to Survey Monkey so I can see those 30 votes that exceeded the free minimum. They wouldn't have made a difference anyway, since the top four vote-getters distanced themselves from the pack.

Without further ado, your leading vote-getter and the first mug on USC's Golden Age Mt. Rushmore: Marcus Lattimore, chosen by 92 percent of voters. 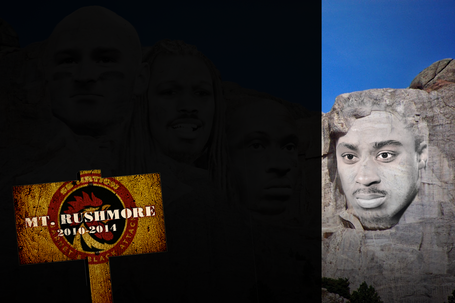 That Lat led the way is unsurprising; that he wasn't unanimous is the real headscratcher. I'll assume some user error played into that, since it seems not everyone voted for four players. And maybe some of you felt a guy who set the school touchdown record despite only playing the equivalent of two full seasons and suffered an unspeakable amount of pain whilst donning your colors and yet remains one of the best ambassadors in program history simply wasn't worthy of your praise, you jerk. Also, Abe Lincoln's hair on Marcus Lattimore makes him look a little like Little Richard. He looks about as happy about it as you'd expect. Asked about which part of the sculpture was his favorite, Lattimore responded, "Jaw, definitely."

We soldier ahead to your #2 vote-getter. Appearing on 90 percent of all ballots, it's Connor Shaw. 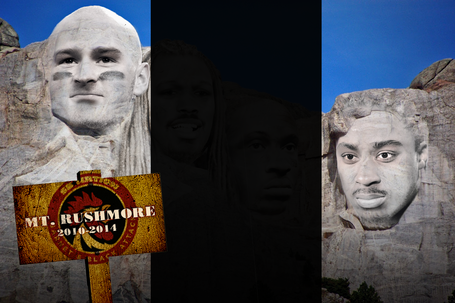 Again, somewhat surprising that Shaw wasn't unanimous, but maybe there still exist some vestiges of the "Bench Connor for Dylan" movement that was robust this time last year operating out of backwoods headquarters scattered throughout South Carolina. Hey, I'm glad no one listened to those people.

In third place, appearing on 83% of all ballots, we have Jadeveon Clowney: 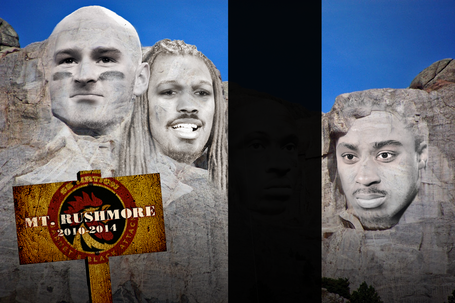 Inarguably the most high-profile of any Gamecock in the past four years and maybe ever, Clowney receive a lot of votes for someone who hates football. BUT SRSLY as with the other two, addressing the "why not?" is a more stimulating endeavor. Perhaps some folks opted for a four year guy like Melvin Ingram over Clowney. Perhaps there was a bias towards offensive players. Perhaps Merril Hoge voted. Who knows. But despite Clowney finishing in third place, he was in no real danger of losing his place on the mountain.

Nor was the fourth place vote-getter, who finished well ahead of the next closest candidate. Appearing on roughly 65% of all ballots, the fourth and final visage on the Gamecock Golden Age Mt. Rushmore is: Alshon Jeffery. 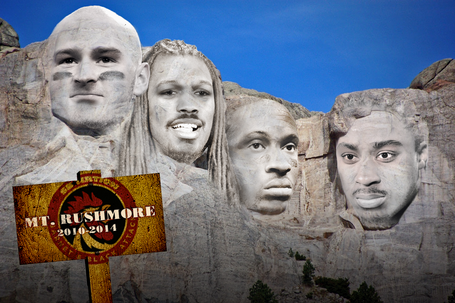 Again, it wasn't close. I was a bit surprised by the lack of competition for the fourth spot. I think Alshon's highlight-heavy 2013 season with the Bears is at least partially to thank for the distance between fourth and fifth place. If he was buried on a scout team, I bet Melvin Ingram, Stephon Gilmore, or even Bruce Ellington could have made it interesting. But with the emergence of Alshon Jeffery: NFL Star, we're still privy to the heroics that cemented his legend during his time in Columbia.

We did receive 14 "other" votes, and here were some of the best write-in candidates:

Yeah, I know it's Runners Up, but there's a great Kurt Vile song called "Runner Ups" and I wanted to link it, so, nyeh.

Anyway, here's how the rest of the top ten shook out. Parenthetical number is the percentage of ballots on which candidate appeared.

Mike Davis received just four measly votes. I thought recency would work to his benefit, and Chicken Hoops pointed out just how good Davis has been in his two years at South Carolina. Would another thousand yard season be enough for Mike Davis to displace Alshon Jeffery? Hopefully we'll find out!

Anything jump out to you? Aside from the fact that there are delightfully few losses to Clemson in this list's collective resume?

A sincere thanks to all you readers who participated with such gusto. We'll try to get this thing on the docket at the next BOA meeting. Let's get this thing built into the side of...uh...wait, where the hell's this thing gonna go?