Welcome to our new #LOLClemson hub

Clemson finds itself in a lot of embarrassing situations. It's past time we made a bona fide commitment to documenting every single one of them.

Share All sharing options for: Welcome to our new #LOLClemson hub

Dabo Swinney probably has more power than he ever imagined he could have. He makes important decisions every day about the operations of a multimillion-dollar enterprise. If I were Clemson athletics director Dan Radakovich, this knowlege would keep me awake at night. But I am not Dan Radakovich, so instead of a source of worry, Dabo Swinney's over-empowerment is an unyielding source of joy and splendor.

To Dabo's credit, he's good at doing two of the most important things a college football coach has to do: hire good coordinators and be a good salesman. His competence in these areas gives him the liberty to make some pretty ridiculous decisions at the periphery of his job duties. You know, things like speaking to the media and sending out recruiting fliers.

With a man such as this effectively acting as a cultural leader for hundreds of thousands of people, it's small wonder that we see his influence popping up throughout Tiger nation. And those are the kinds of things that we want to start documenting in our new #LOLCLEMSON hub, which I guess you could think of as the bizarro version of our Steve Spurrier hub. (Although there will be some overlap, to be sure.)

The logistics of actually setting this up require us to recall all of the weird and hilarious things Clemson and its advocates have gotten into over the past several years. That's not easy to do off the top of your head, so asked Twitter to crowdsource some highlights.

Putting together a new section on the site starring moments when Clemson embarrassed itself. Help us remember some. There have been a lot.

The volume and intensity of the response was unexpected. Here are some of the highlights.

@GABAttack "Omaha" on their hats

@GABAttack There was a bowl game a couple of years back.

So, @GABAttack is doing great job of angering Taters today. But be careful, because they too deep. pic.twitter.com/WRkIEKXS9h

@GABAttack Breaking their own rock

Great job, everyone. I think y'all pretty much covered it. Here are some other fun things: 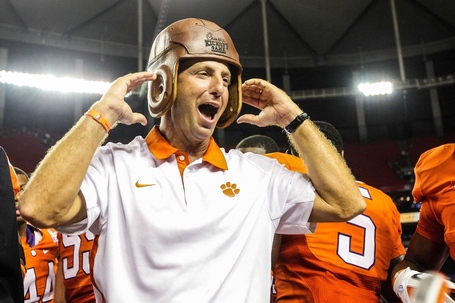 And this LSUFreek gif is the essence of the Dabo-Spurrier relationship:

Surely we've missed something here or in the hub itself. Do let us know in the comments if we did.