Steve Spurrier held court before the media at Williams-Brice Stadium on Sunday afternoon. With healthy doses of shade and actual football news, it made a fitting bookend to talking season. (Watch the whole video here, if you like.)

On which freshmen have a chance at early playing time:

Both of those two freshman DBs, Chris Lammons and Wesley green, it didn't take long for them to show that they can play. Al Harris, Jr. -- another freshman. Those three are out there. I think one of them is already on the first-team defense.

[At wide receiver], this Deebo Samuel is going to be a good player. Shaq Davidson is injured right now, but he's close to being ready ... The linebacker looks pretty good, too. Bryson Allen-Williams, named after our stadium here, I think. 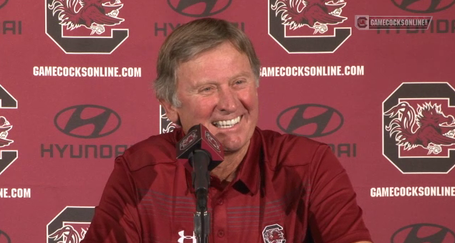 On Brendan Nosovitch practicing at tight end instead of quarterback:

Brendan Nosovitch is a thick kid ...

He's an athlete. He can run with it. He can catch. He's got good, thick hands. We've got to find a way to utilize his talents. If it's tight end or slot receiver or wildcat quarterback, he's very capable. His passing has been not quite as good as the other guys.

On errant snaps from Cody Waldrop and Clayton Stadnik:

Our centers have got to snap the ball a lot better than they have lately. They've been throwing it all over the place. Last night I said, "Now, Connor Shaw used to catch that one." The one that's way over here and down low. 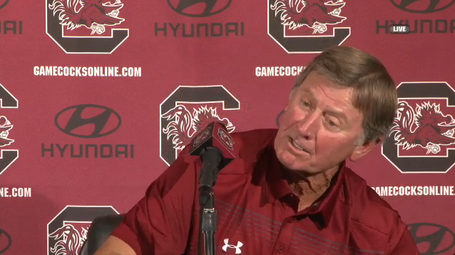 I said, "The guys we have now might not be able to catch that one."

On Ron Morris's being back and asking questions:

Oh, that's right. You're back asking questions, aren't you?

On which walk-ons are candidates for the two remaining scholarships:

Probably the [walk-on] leading the pack right now [for getting one of the extra scholarships] would be Carlton Heard ... He had an excellent summer. He did everything the coaches asked plus a little bit more.

The Big Five conferences all playing each other, I don't think that makes a lot of sense, really. Playing East Carolina is a lot tougher game than maybe picking up one of those bottom Big Ten teams, and a lot of fans around here would rather see a team that's close by.