Why don't we talk about South Carolina's?

Share All sharing options for: SEC Network reveals delightful animations for all schools

The SEC Network is mere days away from debuting, and it's starting to sink in just how exciting it's going to be to fall under this network's umbrella. For an example, take a gander at these beautiful school-centric graphic packages that were released today.

South Carolina's is, in this writer's opinion, quite nice. Watch the full animation here, and here's the final frame: 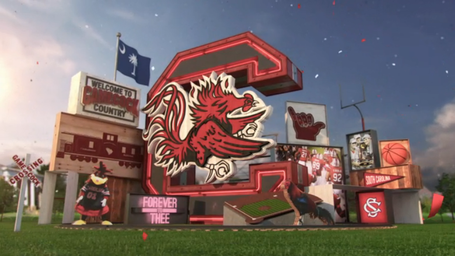 Let's go over some of this stuff:

• Generic columned Southern manor. Or is that a specific building? I couldn't tell.

• Gamecock Crossing sign, Cockaboose, Railroad Tracks: My only gripe is the slight lapse in realism resulting from the omission of a 50-car train creeping along the tracks whilst I sit in my idling vehicle, late for my 9:30 J464 class.

• Cardboard (or perhaps wooden) Cocky and Sir Big Spur in the foreground.

• "Welcome to Gamecock Country" stadium sign or perhaps enormous bar of soap, we'll look into it and get back to you.

• South Carolina State Flag. Hey did you know that's not actually a moon, but a crescent symbol that appeared on the caps of Colonel William Moultrie's malitia? What's that? You did know that? In fact it's been explained to you every week since 1994 by some jackass SC history buff? Oh.

• Foam hand doing the spur signal, although if you squint it looks like a cartoon dinosaur which is also nice.

• Shot of football team entering. Gerald Dixon Jr. and Jerell Adams featured prominently. Expect big years from those two. Or, expect them to be abject disasters. Either way, the reason will be the graphic.

• Scott Wingo, et al cradling the National Championship trophy. The second one, I mean. We won two in a row you see.

• GENERIC BASKETBALL. That's it. Like, that was probably the name of the raw graphic. "GENERIC BASKETBALL - FOR USE WITH AUBURN, MSU, SOUTH CAROLINA". It's the graphic's only indication that we have a basketball team. I mean, I know we're no hoops juggernaut but I think a CGI Frank Martin burrowing out of the ground like the fresh-risen undead should have at least been storyboarded.

Anyway, it's quite a breathtaking animation in my opinion. What do you think? Did they miss anything? Like, holy crap, what if they had a Michigan helmet plop into the frame at the end??? TOTAL MISSED OPPORTUNITY, SEC NETWORK.