Let's get to know the Missouri Tigers! Kinda...

The Gamecocks travel to Columbia-West (not West Columbia) this weekend to face off against our ol' throw-a-wrench-in-everything-on-our-way-to-the-East-title buddies, the Mizzou Tigers. This year's contest promises to be a laughable pillow fight key game for both programs, as each squad desperately needs a win to right the ship in 2015.  Mizzou is coming off a sobering defeat at the hands of Kentucky, and South Carolina needs, well, something positive. Therefore, in an attempt to lighten the mood around here, your ol' pal DC3 is going to start giving you a well thought out how-to guide on fun or lighthearted ways to poke fun at the opposing team whenever I remember each week.

So, and while everyone's still all worried or whatever about our fragile football team, let's have a little fun: 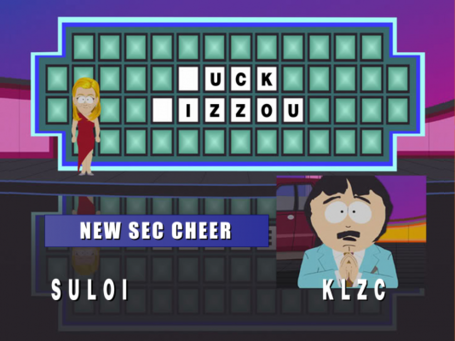 So, why not kick off this arbitrary rivalry week with a dose of random stuff that may be useful in helping us to understand Missouri fans more completely when you encounter them in their natural habitat on Saturday morning. Because we can only make so many Gary Pinkel Jokes. Or maybe not. (please note we do not condone being mean or 'classless' to opposing fans, but snide remarks and 'shade-throwing' are approved behavior. We think.)

This week, we're going to take a look at why I blame Missouri for the Civil War, weird midwestern things, anger-management, as well as a student section that gets itself kicked out of basketball games, but mostly we're gonna make bad Gary Pinkel references (last one I promise).

-Oh, by the way, Columbia, Greenville, and Charleston were our cities first.

-I guess that's better than the original surface y'all played on. But seriously, sawdust and cardboard? Nevermind, y'all always do look better on paper.

-Of course your mascot is named after a militia group formed to fight off an impending attack that never comes; y'all are gonna love our pass-rush.

-Pretty sure climbing a greased pole ain't an Olympic sport, but, y'all are used to playing house rules, so I guess we'll let that one...slide.

-YOU DIDN'T INVENT ICED TEA STOP IT, THE SEC STILL THINKS YOU'RE WEIRD.

-'Blackout' is a perfectly acceptable way to describe losing at home to Tennessee, so, sure.

-Speaking of blackouts, did y'all know that Faurot Field didn't have stadium lights until 1996? Pfft. and y'all thought Clinton didn't give a crap about farmers.

-Hey, y'all know it's illegal to drive with an uncaged bear in your car in Missouri? No wonder this license plate exists.

-It's also illegal to sit on the curb of any city street and drink beer from a bucket, which explains why everybody drinks in their cars. Side note: this has to cut into Anhauser-Busch's profits, right?

-It's also illegal to have a yard sale in your front yard, which explains why they haven't fired Gary Pinkel yet.

This joke writes itself.

-Chase Daniel might have thought that eating boogers gave you magic powers or something, but at least he didn't get in scooter accidents.

-wait a dang minute, MATY MAUK STILL PLAYS FOR Y'ALL?!?!?! That's gotta be a violation of the Geneva Convention, or at least some fire codes.

-I can't ever figure out why or how I would be compelled to buy one of these, but I'm comforted in that it exists.

-There's rogue Amish families kidnappin' Sorority girls in Missouri! I'm not comfortable about this. At all.

-Speaking of being uncomfortable, did you know that there's a museum of nothing but jewelry made out of hair in Missouri? (That isn't my fault you clicked that link.)

-DO YOU WANT TO RENT TRUMAN THE TIGER OR THE MIZZOU CHEERLEADERS FOR A DAY? No, seriously.

-I got through this whole thing without one reference to Branson or its attractions. Didn't want y'all to be second-fiddle for once, Mizzou. 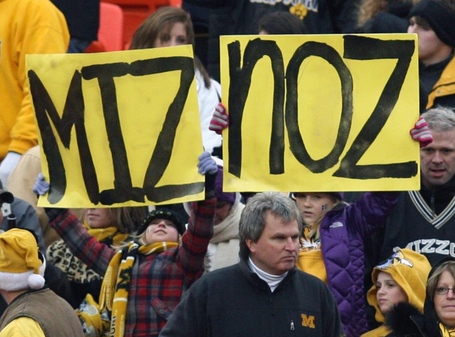 But seriously, we should probably leave them be and let them do what they really care about, making fun of Kansas, and waiting till basketball season.

*THIS ARTICLE IS PURELY MEANT FOR GIGGLES AND SUCH, AND IS NOT AN ATTEMPT TO RILE UP ANYONE UNLESS IT DOES WHICH IN THAT CASE WE LAUGH AT YOU.