Here we are after 2 (or 3) weeks of college football. Alabama still looks like thy are a step above everyone else. There were some upsets on Saturday, and some winning streaks extended. Lets look at the poll below and get started for his weeks wrap up. 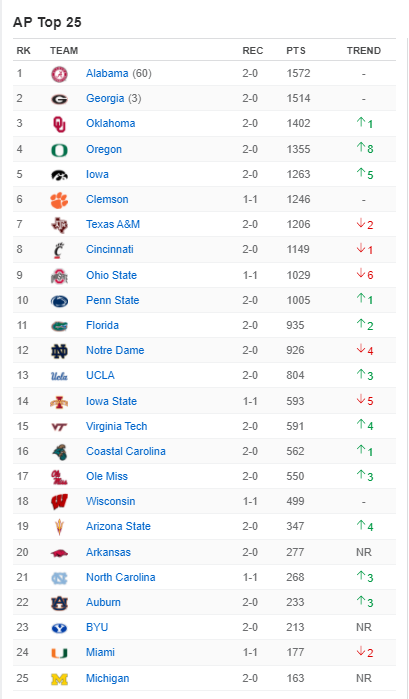 Not sure if there is anything to say about Alabama. They are in cruise control until the SEC Championship game right now. Maybe Florida will keep it close this week?

South Carolina rolls into Athens to play the #2 ranked Georgia Bulldogs. Coming into the game as a 32 point underdog might not make for a pleasant Saturday night for Gamecock nation. We can only hope whoever is playing QB for Uga throws 3 interceptions again since Muschamp is the special teams coach, you know they will miss at least one field goal again this game. I still do not think this will be a competitive game, but maybe they will surprise me.

Oklahoma came back with a vengeance this week against Western Carolina. I guess they finally realized they just can’t roll the ball out there and walk away with a comfortable win. Win number 3 should be on the docket as they keep the cream puffs rolling in with Nebraska this week. I wonder if Scott Frost might be the second major college coach fired this week?

Oregon goes into the Horseshoe and absolutely wrecks Ohio State’s year without their best defensive playing on the field. It looks like not everything is coming up roses in Columbus as Ryan Day decides to shake up the defensive side of his coaching staff. It will be interesting to see if they can figure out how to stop the outside run sometime this year. Maybe Michigan has a chance this year? 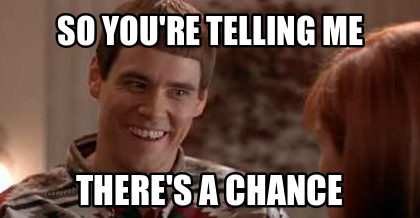 Iowa keeps it’s winning streak alive by taking out their in state rivals. It might have been a good thing Matt Campbell got an extension at Iowa State. We already dumped one coach that was not able to beat their rival. At Least the game was competitive, because the ones against South Carolina’s in state rival have not been.

Clemson still hanging out at number 6 after laying the smack down on SC State. Buddy Pugh did not deserve what they got up in Pickens County on Saturday. I hope that means the fan base up there can be taken off of suicide watch. It was a bad week to be anywhere near a Clemson fan after the Uga game. I guess now the fan base is back to thinking they are winning another national championship this year.

Texas falls 2 spots to #7 after struggling with a back up quarterback on the road at Colorado. Not sure how long the QB will be out, but they better hope he is better before the game with Alabama. Not sure it would help, but at least they would technically have a shot.

I guess beating Murry State by 35 doesn’t mean anything Cincinnati. You guys drop a spot in the poll even though you have had smooth sailing the last 2 weeks. Maybe moving to the Big XII will bring more respect. I mean, playing Kansas and Texas Tech should help the strength of schedule for you.

And here again are the mighty Buckeyes. I think my dog has a harder time running outside than the Ducks did on Saturday. I mean at least he has to wait for me to open the door to go out. It seemed like Ohio State left that door open all day long. Tulsa might not be the type of game you want after that loss. At least they have 4 more weeks before they play Indiana and Penn State back-to-back. I’m sure they will have everything figured out by then.

Speaking of Penn State, they reside as the last team in the top 10 this week. This week will be a little harder for them with a game against Auburn. But, everyone knows Bo Nix doesn’t play well on the road, and Bobo catch coach to save his life without all the talent he had a Georgia. I mean I hope Auburn wins just so the B1G can’t say they beat an SEC team. I hope this is the first game that is tied 3 to 3 after four overtimes.

Florida sits at number 11 after their easy win over South Florida. Florida is playing two quarterbacks, so do they have 1 (as the old saying goes)? Does Clemson want the younger Scott to come back to the the co-offensive coordinator? I mean, has he done anything at USF? Was he really an upgrade over Charlie Strong? I mean the only team they beat last year was The Citadel.

Notre Dame drops 4 spots after their "closer than the experts think" win over Toledo. So much for them raising the strength of schedule for the 5 teams they have to play in the ACC this year. I’m not sure why anyone even mentioned Kelly’s name in the Southern Cal job search. I would think they could do better.

The surprise team of the year might just be the UCLA Bruins who sit at lucky number #13. They even got a little time off to soak in the win against LSU. I hope they haven’t read too many good things about themselves with Fresno State on the schedule this week. It would not surprise me to see that game a little more contested than the LSU games was for UCLA.

Iowa Stated drops 5 spots after their loss last week. The Cy-Hawk trophy goes back to Iowa again this year. That spot in Iowa States case must be getting very dusty. Just remember that Brock Purdy beat out Col. Zebuliah Noland a couple of years ago. If you don’t know about the Col., go to Twitter asap.

Virginia Tech keeps climbing up the poll to sit at #15. Keep up the good work Hokies. Maybe Fuentes is just glad the Shane has a job at South Carolina and the pressure is off his back a little bit. It will be interesting to see how they compete the rest of the year. It might come down to VT versus Pitt to see who gets sacrificed to Clemson in Charlotte this year.

Coastal Carolina checks next on the list. I’m not sure if you can open a season any easier than Coastal did this year. I’m not sure I could call them the 16th best team in the nation after beating The Citadel and Kansas. I’m not sure who was supposed to be the harder team to beat.

The fighting Lane Kiffens come in at #17 this week. The game against Tulane should be a fun one to watch if you want to see offenses go up and down the field all game. If the Uga game gets too bad, this might be the game I switch it to. After the Tulane game, having Alabama and Arkansas in consecutive weeks is not going to be fun. Wow, how much did they pay the SEC schedulers to give them Tennessee and Vanderbilt as their cross-division games? Seriously, I’d like to know so we can start a collection for when Texas and Oklahoma are added.

Wisconsin is in next after pasting Eastern Michigan. They might be able to really get some momentum if they beat Notre Dame next week. It will be interesting to see which QB plays better in that game since they were both Badgers last year.

The Sun Devils are climbing up the poll like the afternoon temperatures in Tempe. It’s surprising with all the coaching chaos that is happening over there. Maybe Southern Cal needs to see if the Hermster will switch to be their coach.

North Carolina is making their way back up after hammering Georgia State. I think the colors of Georgia State reminds them of Duke blue, so they turned up the heat. I could honestly not say who is actually better between Georgia State and Duke.

Auburn moves up 3 spots after beating Alabama State. I bet Bobo wishes he got a couple of easy games to start last year too. The competition goes up Saturday night against Penn State. Does Auburn get a statement win in Happy Valley, or do they crumble during the "white out"? I hate to see James Franklin and Penn State have anything good, but I might want them to win because I think I like Bobo even less.

BYU jumps into the rankings at number 23. They had a nice win over BYU. I think they are leading the Pac 12 right now with 2 wins to start the year. I guess losing the hotshot QB from last year isn’t slowing them down any so far. They will look to cement themselves as the Pac 12 killer when they play Arizona State next. Will they go 3 for 3? If they get to 5 Pac 12 wins (they play Southern Cal and Washington State) do they get a free trip to the Pac 12 championship game?

Miami drops 2 spots after surviving App State. I’m not sure that loss is more damaging that Auburn beating Alabama State. App State is not your typical Group of 5 team. They have some very good players, and they are always a tough out. I know the game was in Miami, but that win might be one of the better ones for Miami this year. Plus, you should give them credit for not letting Alabama beat them two weeks in a row.

The celebration has been started in Ann Arbor Michigan. They are 2-0 while the hated out of state rival is 1-1. I mean they maize and blue fans have to be going wild this week. When was the last time Michigan had a better record than Ohio State? I don’t have enough time to look it up, but I bet it has been a long time. They have 2 more winnable games before they have to play Wisconsin. Well, enjoy the good times while they last Wolverine fans.

The comments are open below. What game(s) are you looking forward to watching this weekend?