Well, it is late Wednesday night, and I obviously have insomnia to be writing this. Let’s look at the last two AP Polls. We will start with the Week 1 poll. Just skip to the comments if you don’t have the time to read the whole Fan Post. 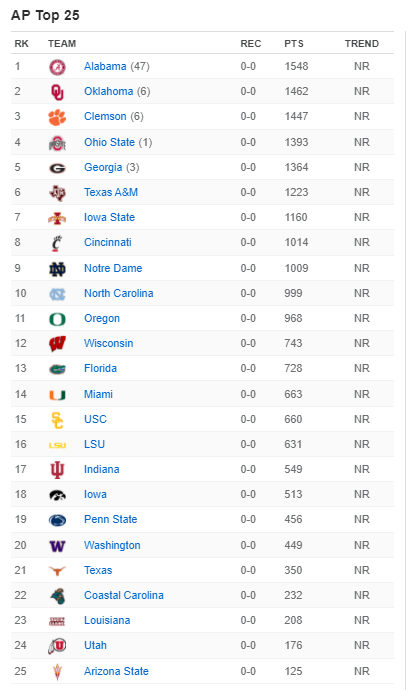 Before everyone played a game, this doesn’t look too bad. It’s just that like every season for the last couple of years, the ACC looks a little overrated. I mean, I am a South Carolina fan so I would of course think this. It is Clemson and the 13 dwarves as usual. And, Clemson really helped themselves out by having the weakest strength of schedule out of anyone in the ACC.

Now, Let’s look at the AP Poll after week 2. 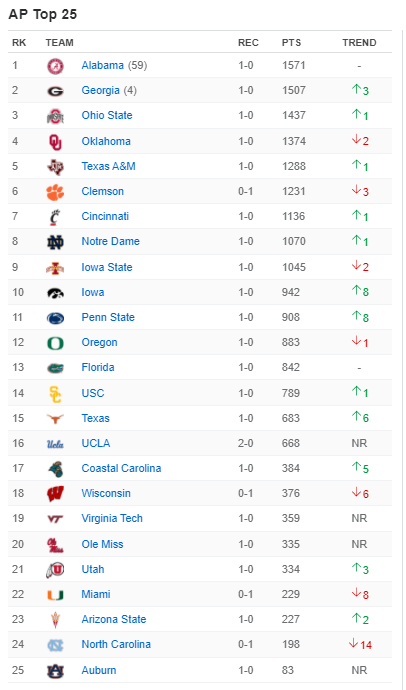 Huh, I guess that answered that question…yes, the ACC was overrated as usual. How Clemson only dropped 3 spots is not a mystery to anyone. I’m sure Dabo is already crying about the disrespect that the voters are showing them. No one is buying it Dabo, so you can calm down. You will still win the next 10 games without an offense anyway minimally. Although it would be awesome if you ended up 10-2 with the 2 losses coming against SEC East teams.

North Carolina dropped 14 spots to #24, and Mack Brown looked like he aged 14 years during that game. Again, UNC should rally to win 9 or 10 games this year to give some credence to the voters trying to get Clemson back in the top 4. The bad news for the ACC is that the Coastal Division winner might have 2 losses before the ACC Championship game. That will take some of the shine off the winner of that contest at the end of the year.

Miami sure did put up a fight against Alabama. I mean it really took some effort to keep them under 50 points. I mean Saban is killing his guys for lacking intensity. Just imagine if they played that way last Saturday, they could have scored 70. I do feel a little bad about the guy that had to give up the turnover chain when the officials ruled the Alabama running back was down before the ball came out, nothing like premature celebration to ruin your day.

The good news for the ACC is they actually have more teams in the Top 25 now than they did last week. Virginia Tech has overtaken UNC and Miami at #19. At least for once the voters actually put a team that won a head-to-head matchup higher in the poll that the team they beat. I’m not looking for that to happen much this season.

Georgia strolled up to #2 after the "can’t take my eyes off this game" against Clemson. If they are the #2 team in the nation, then just give Alabama back the national trophy now. Even though they won the game, they might have lost overall with up to 5 players/coaches testing positive for Covid-19. Nothing says the state of South Carolina leads the nation in daily cases like that stat.

Oklahoma fell out of the #2 spot down to #4. I watched a good bit of that game last Saturday and felt like the Tulane QB is a warrior. I mean that kid took some shoots in that game and never gave up. He is one tough customer. His toughness and never give up attitude was in direct opposition to OU’s defense. If they think they can compete in the SEC with that defense, they will be very upset whenever they decide to join the league.

Ohio State moved up to number 3 after a 2nd half comeback against Minnesota. It certainly hurt the Golden Gopher's chances when their running back go hurt in the 3rd quarter after amassing 163 yards on the ground. I hope he has a speedy recovery from his injury. I will not say too much about Ohio State because they beat Clemson in last year’s playoffs. I will rip someone else off and just be glad the Clemson is 0-2 in 2021.

Texas A&M at #5 makes it a company of SEC teams at the top of the poll. This will fuel the fire for all the other leagues to say the SEC is top heavy again this year. I can’t say they are wrong yet. Florida hanging in the middle of the poll at 13 with Ole Miss and Auburn at the tail end is a little proof of this.

The Pac 12 is making a strong push to start the year. UCLA’s win over LSU is a strong case for the best non-conference win so far. Having 5 teams in the poll is a feather in their cap. The problem is that Oregon is the highest ranked school, and they are outside the top 10. They have a little work ahead of them if they want to be in the Playoffs at the end of the year. You know there will always be some wacky Pac 12 after dark games this season, so not sure how man teams they will keep in the top 25.

It looks like it is Ohio State’s year again in the B1G. It doesn’t look like Penn State has the offense to keep up, and I’m not sure that the Iowa or Wisconsin defense is strong enough to keep them in a game with Ohio State. The only thing for sure is that Ohio State will more than likely keep it’s streak alive win the play Michigan at the end of the year. It will be an interesting game this week for the Cy-Hawk trophy between Iowa and Iowa State. I think Iowa State needs the game more than Iowa to prove they can compete again with Oklahoma and Texas in the Big XII.

Speaking of the Big XII, the other 2 teams in the poll should be considered SEC teams now. Even if they bring in Cincinnati, UCF, Houston, and BYU I’m not sure that makes the conference any stronger in the long run. If I was one of those schools, I would have held off to see if the ACC/B1G would try to expand to match the SEC.

The team with the teal turf rose up 5 spots after hammering my Citadel Bulldogs. This is more than likely an over reaction to the win, or there just isn’t anyone else to put up there. Coastal really needs to win out after Louisiana lost to Texas on Saturday. They will not get any other help to stay in the top 16 the rest of the year. They have to hope that App State is still undefeated when they match up on October 20th. Although I’m sure Conway is going crazy to host Kansas this weekend. It just is a little disappointing that game is more like they are paying Kansas to come to play them as bad as the Jayhawks have been the last several years. As bad as it is to be a South Carolina fan, at least we are not Jayhawk fans (no disrespect to your brother Katie).

Well, what does everyone think of the AP Poll? I know they shouldn’t even have one until after everyone plays 3-4 games. Who so you think is under or over rated?