South Carolina 78, Kentucky 77; or, How I Learned to Forget About Jodie Meeks and Love Devan Downey

Share All sharing options for: South Carolina 78, Kentucky 77; or, How I Learned to Forget About Jodie Meeks and Love Devan Downey 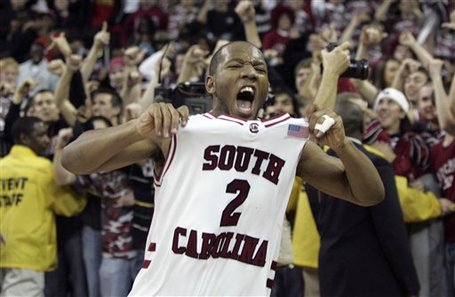 Beating Florida was a big victory of sorts. However, and with no disrespect to the Gators and although there was no home crowd to please today, beating Kentucky in Rupp is a season-defining moment for these Gamecocks. Coming into this week, Kentucky was the best team in the conference, with no SEC losses. Now, they're behind us in the standings. Moreover, winning games in Rupp against the fabled Cats program is not something that comes often for the Gamecocks. I mean this will all respect to the Cats; it means something to win in their house. In fact, we had only won once before in Lexington, back in 97 during the heady days of Eddie Fogler's tenure as HC. In sum, this was both a historical win for us and a win that will go a long way towards getting us into the NCAAs for the first time since 2003-04.

For those on the national scene that were paying attention, this was also (or should have been) the game where Devan Downey arrived as a major player for props as one of the best in the nation. Gamecocks fans and fans of opposing teams have known Downey is a great player for a long time, but today, Downey should be recognized as one of the nation's best. Not only did he outplay POY candidate Jodie Meeks, but he also put in one of the most clutch performances in Gamecocks' history. Eight points in the final four minutes. Two straight threes. And then the game winner on a turnaround jumper with five seconds left. AMAZING.

This definitely isn't to say that it was all Downey. Several Gamecocks came up big today. Zam Fredrick hit some huge shots and actually outscored Downey by one. Mike Holmes played a good game. Dominique Archie made an important shot late in the game. This is a team that is greater than the sum of its parts, and it's a team that could very well win the SEC this year. They've gotta keep winning, but they've shown they can that.

I'll have a more nuanced recap up tomorrow. Obviously, a lot of things contributed to this victory, good defensive play in particular. Right now, though, let's just enjoy it. This was a HUGE win.