Despite a pair of defections from the 2013 class, the overall trend on the recruiting trail is an upward one for the Gamecocks.

The concept that there is something fundamentally flawed with South Carolina's approach to recruiting high school football players is a relatively new one. How new? Since last Sunday, when Matt Rolin switched his commitment from South Carolina to Florida.

Prior to that, the consensus was that, considering the dearth of talent in this year's in-state crop, the Gamecocks were doing rather well in the 2013 recruiting cycle and seemed poised to pounce on a bounty of homegrown talent during the 2014 cycle. But Matt Rolin's decommitment managed to completely unravel the psyche of the Gamecock fan base, causing many of its constituent parts to wonder why Steve Spurrier's staff is so ill-equipped to compete with the likes of Georgia and Florida on the recruiting trail.

I'm not going to sit here and tell you that I would rather have the current, 15th-ranked recruiting class than the insanely talented hauls that Floirda, Alabama, and LSU reel in year after year, but that ranking has to be placed within the context of the dwindling talent base in the state of South Carolina over the past several seasons. 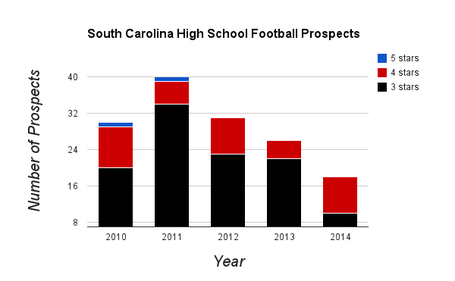 Considering that the Gamecocks' recruiting classes have been ranked 25th, 17th, 15th, and 18th during the period depicted in the graph, what I'm seeing is recruiting that is trending in a generally upward direction despite diminishing in-state talent, the retention of which has been so vital to the current on-field success.

Sure. To be successful, we have to be able to recruit Florida, Georgia, and North Carolina as well as South Carolina - and the Gamecocks are doing that - but, to some degree, the USC's recruiting success will always be tied to the quality of the in-state talent.

But for those looking for the Gamecocks to finally break through into the upper echelon of recruiting, 2014 has potential to be the most highly touted class since the 2007 group that brought in Chris Culliver, Cliff Matthews, Weslye Saunders, Travian Robertson, Melvin Ingram, and Stephen Garcia. With 8 four star athletes in the state of South Carolina, the top of the in-state crop figures to be the strongest it has been in several years, and USC is in good shape with 8 out of the top 10 prospects in the state.

With each successive graduating high school class, South Carolina will be viewed less as the persistently mediocre team of the mid-2000s and more as the school that Melvin Ingram, Marcus Lattimore, Alshon Jeffery, and Jadeveon Clowney led to multiple ten-win seasons. Consistent success in recruiting hasn't come as quickly as we might have hoped, but we shouldn't lose sight of the overall upward trend based on one kid deciding that he'd rather play at Florida.