The Daily Feed: Ace Sanders posts on Instagram that he's coming back for 2013

Share All sharing options for: The Daily Feed: Ace Sanders posts on Instagram that he's coming back for 2013

Ace Sanders' 2012 season was notable for the record-setting success he had returning punts, but this time he's making headlines for RETURNING to SCHOOL. Amirite? 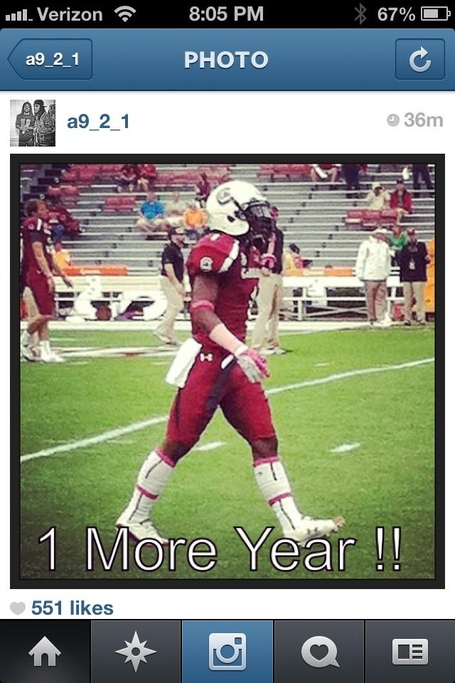 My immediate concern was that Ace may have been merely reposting something that a fan had sent him, pleading with the junior to come back for his final year of eligibility. I don't have the strongest grasp on the ins and outs of Instagram, but that appears not to have been the case here.

Another minor concern is that he doesn't exactly specify what there will be one more year of (wearing pink armbands? the length of time between today and 1/7/14?), but we can reasonably infer that he is making reference to playing football for the South Carolina Gamecocks.

10:02 PM UPDATE: The Big Spur is now running with this story, so I suppose it's safe to call it news.

Set your Heisman Watches early for Johnny Manziel vs. Jadeveon Clowney
Come for the single sentence paragraphs, but stay for the conclusion, in which the author crowns Clowney "Jadeveon Football".

Cooper excited about USC (Gamecock Central, subscription required)
Pharoh Cooper tells Gamecock Central that he will not visit North Carolina, who had been pushing hard to get him to flip to the Tar Heels. What position he will ultimately play in Columbia still appears to be up in the air.

2014 receiver Braxton Berrios impresses Prime Time (The Big Spur, subscription required)
2014 WR Braxton Berrios, a standout at Raleigh (N.C.) Leesville Road, shined in Friday's Under Armour Underclassmen Combine at Tropicana Field, leaving Deion Sanders himself quite impressed with the 4 star Gamecock target. Barrios is a Caucasian slot receiver, so you already know who everyone is comparing him to.

Rodgers won't decide for a few weeks
OL Na'Ty Rodgers of Pomfret, MD has put off his decision for a few weeks. Rodgers had planned to announce between USC and Maryland at the Under Armour Game last week, but he decided on Friday not to. There was a lot of buzz about the Terrapins making a late surge leading up to his decision to postpone his announcement. The Gamecocks (January 18th) and the Seminoles (January 25th) will each have a chance to win over the offensive lineman during his final two official visits before signing day.

4 star DE Keyon Brown updates his recruitment - Rivals.com Video (subscription required)
Wauchula, Florida DE Keyon Brown lists the Gamecocks as being among the schools he's interested in right now. From the way he talks, it sounds like the in-state schools (namely, Florida) have a nice lead here, but South Carolina at least has their foot in the door.

What Happened: SC State
Chicken Hoops breaks down the Gamecocks' win over the S.C. State Bulldogs.

Life of a Gamecock: Thaddeus Hall Still Has Gamecocks On His Mind
Friend of GABA Adam Garrett is back on the blogging grind. He makes his Daily Feed debut for the first time... again bringing you the latest on basketball signee-turned-non-qualifier Thaddeus Hall. It still seems unlikely that Hall will end up in the Garnet and Black, but - as Adam points out - he's the kind of kid to whom you can't help but want good things to happen.