Share All sharing options for: Gamecocks Switch up the Order, Wallop Wofford Terriers 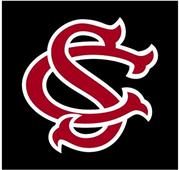 I don't usually give mid-week games individual posts, but tonight's win versus the Wofford Terriers was noteworthy for a few reasons.

Second, that seven run inning happened thanks to a grand slam from senior Nick Ebert. Ebert came on to pinch hit for Bobby Haney in the 6th inning. The switch paid off in a big way one inning later. More importantly, the switch showed a willingness by Ray Tanner to replace struggling Bobby Haney in the lineup.

I can't remember a time this season when anyone other than Haney has played shortstop for us. In order to fill out the infield, Tanner moved Scott Wingo to SS, Adrian Morales to 2B, and Whit Merrifield to 3B. Even though Wingo is a natural second baseman, he must be at least serviceable at SS since the Gamecocks committed zero erros on the night. The same can be said for Morales at second base and Merrifield at third. In fact, Morales was originally brought in to compete with Wingo for starting time, and, if you'll remember, Merrifield started the season at third this year. It will be interesting to see if Tanner opts to start Wingo at SS either tomorrow against Charleston Southern or this weekend versus Arkansas. We're pretty deep at the OF positions and 1B, so we need to figure out a way to get those better bats on the field. Maybe Wingo at SS is that way.

Nolan Belcher also deserves a nod a of approval. After not pitching in about a month, Belcher went 5 innings without surrendering a run while striking out 4 but also issuing 4 walks. Still, it's encouraging to see some signs of life out of our pitching staff after last Sunday. Jimmy Revan did his part as well, pitching 2 scoreless innings.

As for Haney, you have to feel for the guy. I suspect his playing time will continue to dwindle as the regular season winds up. On the other hand, a .200 batting average has no place in the lineup of a championship caliber college baseball team. Hopefully he'll be able to contribute as a defensive replacement going forward.