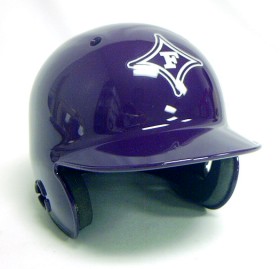 After sweeping Arkansas, USC tackles two more sweeps on Tuesday versus Furman. One is the two game series with the Purple Paladins, and the other is a sweep of mid-week opponents.  (via www.minihelmetworld.com)

The  South Carolina Gamecocks (41-11, 20-7 SEC) completed the sweep of its SEC baseball nemesis, Arkansas (38-14, 16-11 SEC), this afternoon in front a stadium packed with angry Razorback fans. Carolina had 8 hits compared with Arkansas' 7 to chalk a 5-3 win. Freshman Tyler Webb started for the Gamecocks and allowed all three earned runs on the afternoon. John Taylor (3-2) recorded the win. Matt Price earned the save, his seventh of the year. On the offensive side, Whit Merrifield led the Gamecocks with three hits and three RBIs. Bobby Haney was 1-4 but also was robbed and line-drive home run in the fifth.

LeftOverHotDog adds some game 3 insight during the second iteration of its podcast. Many thanks to the guys over there for inviting me to tag along. This week we discussed Sunday's game, the sweep, and the looming Florida series. Those guys have been covering Carolina baseball since before it was cool, and they do an excellent job. You can catch the podcast here.

On Friday, starter Blake Cooper turned in his usual gem of a performance en route to a 3-2 win. Cooper went 7 innings and struck out 7. He only allowed 3 hits - Arkansas' only hits of the game. The win was Cooper's 10th of the season, which keeps him atop the SEC in that category. Drew Smyly of Arkansas sits in second with 8. Cooper also leads the SEC in batters struck out looking (36), is 4th in opposing batting average (.217), and is 6th in ERA (3.01).

Sam Dyson, meanwhile,  seems to be getting better and better every weekend. Dyson pitched a complete game shut out on his way to a 5-0 victory. Dyson struck out 8 on the night, walked just 2 batters, and allowed only 6 hits. After getting out of a bases loaded jam in the first inning, Dyson settled down to earn his 5th win of the season. Dyson is now tied with Blake Copper at 5th in the SEC for batters struck out (79) and sits at 9th in opposing batting average (.247). He also holds 6th place for batters struck out looking (29).

This was a milestone weekend for the Yardcocks. It was both the first time he have won a series in Arkansas and the first time we have swept the Razorbacks since 2001 in Columbia. Whatsmore, it sets up next weekend's series with the Florida Gators to decide the SEC regular season champions. Both Carolina and Florida currently lead the SEC at 20-7.I'm convinced that USC has already locked up the chance to host a regional, but a couple of wins versus Florida would lock up a top-8 national seed, in my opinion. Despite nearly losing to UGA in each of its three games over the weekend, UF is still playing some great baseball. It's sure to be one heck of a series. One quick note; this week the weekend series starts on Thursday in order to provide the teams with more rest before the SEC Tournament in Hoover. I'll have more on that in the weekend preview, though.