Share All sharing options for: NCAA Football '14 Has Some Things To Say About South Carolina's QB Controversy

Operation Sports released a video displaying the top ten rated players on each team featured in NCAA Football '14, so obviously we have to tell them which players they snubbed or, conversely, think way too much of. 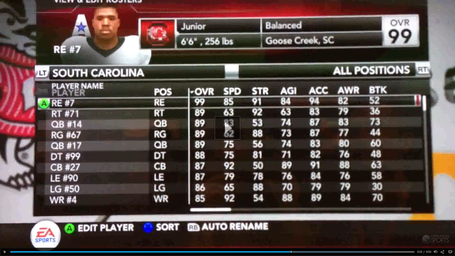 It's difficult to gripe about the best player on your team being given the maximum rating of 99. Slightly less strong than the starting left tackle? Slightly less agile than your backup wide receiver*? Those feel about right.

*More on him in a moment.

It makes sense that there's a big gap after Clowney and then a bunch of players grouped together in the high 80s. I would have a hard time telling you with any certainty who the best player on our team is - as of today - outside of Jadeveon, but I could narrow it to down one of the following five: Connor Shaw, Brandon Shell, Kelcy Quarles, Victor Hampton, and A.J. Cann. And hey, look! They're all accounted for. But who's that?

Ronald Patrick, You Do Not Belong Here

Maybe there was a mixup in the EA Sports offices over which guard is Ronald Patrick and which one of them is AJ Cann, but one of them is a positioned to make a run at an All-SEC season, and it is definitely not Ronald Patrick. While he has the inside track to return as the starter at right guard, he is probably not the fourth best player on the offensive line and is definitely not the fourth best player on the entire team.

The Quarterback Competition is Neck-And-Neck

Connor Shaw and Dylan Thompson both earned ratings of 89, which feels about right. Connor Shaw's speed score is too low though. He's definitely faster than Jadeveon Clowney and probably has a better 40 time than both Shaq Roland and Victor Hampton.

See? I said there would be more on him in a moment. If he's the best wide receiver on the team, then you could have fooled the spring depth chart. Roland probably does have the greatest upside of every returning pass catcher on the roster, but Bruce Elllington, who was the team's leading receiver in 2012 and just so happens to be coming back for his junior season, seems like the safer bet.

What do y'all think of EA Sports' estimation of the Gamecocks' ten best players? Sound off in the comments!