A Tale of Two Teams: What Clemson-Carolina Means to Both Teams this Year

Share All sharing options for: A Tale of Two Teams: What Clemson-Carolina Means to Both Teams this Year 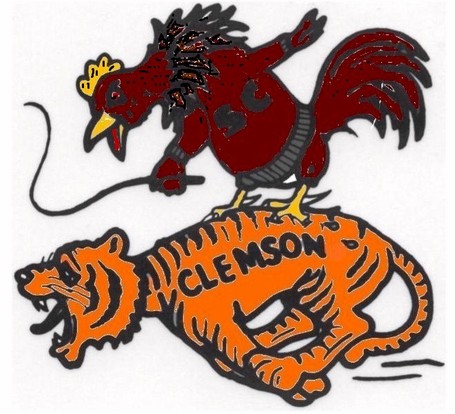 The Famous 1902 Transparency. Check out Photon Torpedo Tube for a story that should make every Gamecock proud (and every Tiger ashamed).

It was the best of times, it was the worst of times. Like last year, Carolina and Clemson come into their annual slugfest going into different directions, but both could reverse their paths by winning the game. This time, though, the roles have switched. Last year, the Gamecocks welcomed Clemson to Williams-Brice with the weight of a four game losing streak on their shoulders. Beating Clemson would have been a way to partially remove the taint of the lost dreams of what had been a very promising season. Clemson came to town having had a pretty solid season, although they had lost to Boston College the previous week and lost a bid in the ACC Title Game in the process. Of course, the Tigers won that game on a last second FG, ruining the Gamecocks' season and bolstering their 2008 preseason expectations.

This year, things have gone the other way. The Gamecocks, although hardly world beaters, have generally lived up to expectations. If we win this game and our bowl, we will finish the season ranked for the first time in the Spurrier era. Much like Clemson's win did last year, that will likely set up relatively lofty 2010 expectations for Carolina, who returns a lot of players and has a solid recruiting class in the works. Clemson, meanwhile, has utterly failed to live up to their preseason role as a dark horse national title contender. The Tigers removed their battle captain in the middle of the season, replacing Tommy Bowden with Dabo Swinney. Swinney has Clemson playing better football, but this season has been a rough one for the Tigers, and they desperately want to beat us as a consolation prize.

As it should be in any great rivalry, the implications of this game are huge for both teams. For the Tigers, Saturday brings a chance to redeem a horrible season. A win could also give Dabo Swinney, who seems like a very good coach (certainly better than Bowden) and is very popular with the players, a chance to keep his job. A loss, on the other hand, doesn't bode well for Swinney and will plunge Clemson deeper into the abyss of uncertainty. They could lose disillusioned players to the NFL Draft. They could lose the favor of many in-state recruits. Things could get bad. This is a scenario that I would like to see.

What does this game mean for us? In his fourth year, Steve Spurrier needs this win to give him a chance to have his best year in Columbia. A win, and everything appears to be as it should be. We'll be on our way to the Outback Bowl and have a chance to finish the season ranked. That's a good season considering what happened last year. A loss, though, and the program will appear stagnant. This is especially true considering that this game has never been riper for a Carolina victory. Simply put, this is a must-win game for Steve Spurrier and his Gamecocks. I will be extremely disappointed if we don't win Saturday, and I'm not just talking about the kind of disappointment you always get from losing a game, especially to a hated rival. I'm talking about the kind of disappointment you get when you begin to seriously wonder whether your team is ever going to take the next step or whether 6-6 and 7-5 is just your lot in life. This game is a, maybe the, definitive moment thus far of the Spurrier era.

I'll be back on Friday with a preview of the nuts and bolts of the game. Until then, I want to wish all of you a happy Thanksgiving. Enjoy your time with family and friends. Also, do your friend Gamecock Man a favor and pray that I don't burn my turkey.