Shaw's skydive, time-killing in July, whether EA still thinks Williams-Brice overlooks Lake Murray, an Arrested Development question that has nothing to do with USC sports, and more!

Seth asks, "Connor Shaw is jumping out of planes now. How dangerous do you think he will be this season?"

While I'd like to award Connor a few Bad-Ass Points for skydiving, I've known far too many sorority girls who've posted their first person skydive videos to consider it much of an indicator of Manliness. (It should be noted that I'm a filthy hypocrite, as my crippling fear of open heights precludes me from ever skydiving.) So I don't know that we should deduce anything from Connor's feat, but I will speculate on one point: from the beginning of the jump to the moment he touched earth, his facial expression never changed from this.

@FeatherdWarrior asks, "Who's going to be my favorite player in 2013?"

I don't know what parameters you use to gauge players as favorites—Gaudiest numbers? Best interview?—but I tend to gravitate towards the guys who shatter expectations, because it's all positive return and that makes me feel grateful. I asked nothing of them, and they gave so much! Last year, it was Ace Sanders, who I assumed would be situationally productive but went on to become nationally recognized for his ballerdom (so much so that he leveled up. Rats!)

So who rises and shines this year? Expectations are especially tempered for our green linebacking corps, so might a Kelvin Rainey or a Kaiwan Lewis make hay? How about Chaz Sutton, who's like Clowney for hipsters? "Oh, you like Jadeveon Clowney? Ho-hum. He's pretty mainstream. I guess I relate to the underheralded stylings of Chaz Sutton. ON VINYL." But skill positions are always easiest to love, so I'll say Mike Davis. While there is perhaps a higher expectation of him than most, dude's got a ton going for him: big play potential, solid interview, the ability to make us feel better about the post-Lattimore backfield.

@Heisman4Clowney asks, "If there were one game on the 2013 schedule that you could automatically skip and get a W, which one would it be?"

Great question, and it depends on the specifics of your hypothetical. By "automatically skip and get the W," do you mean time leaps three hours forward, events occur, stats are generated, South Carolina wins, and everyone has fond memories of the contest? Or is this more of a warp whistle situation, where we bypass the game entirely but still notch the win column, to the dismay of the opponent?

I'll respond to both. For the "game is still played, win is guaranteed" scenario, I'm going Clemson. I'd love nothing more for Jadeveon Clowney's last stand at Williams-Brice to result in a fifth consecutive Tiger dismantling, so if I could get fate to guarantee it, all the better. The sensible choice would probably be Georgia, but sensibility has no place in this process. As for the "skip it altogether, still get the win" option, I couldn't use it for a game of much substance since it's not an especially honorable course of action, so I'll choose UCF. Save the gas money and fans don't have to sit through what will likely be an unduly stressful and underwhelming performance.

@KaciBarfield asks, "How do y'all suggest we survive the long weeks between now and the beginning of the football season?"

Perhaps you can watch this GIF of a puppy freaking out over a lemon.

It's so sour—he doesn't know what to make of it!

@MeetMeAtTaps asks, "What should you wear to a Kenny Chesney concert?"

[NOTE: ARRESTED DEVELOPMENT QUESTION FOLLOWS. DON'T WATCH THE SHOW? SKIP TO THE NEXT QUESTION. ALTHOUGH YOU SHOULD REALLY BE WATCHING THE SHOW]

I'm gonna go with Cera. Like everyone, I was taken aback with Steve Holt's appearance when he popped up in season four. But considering Michael's line, "I saw Steve Holt today and he looks like he's 45," and the fact that GOB not recognizing Steve was integral to the plot led me to believe that actor Justin Grant Wade's appearance was at least partially augmented for the show. This interview from 2012 would lend credence to that suggestion, since he's looking a great deal less dumpy. (Also: STEVE HOLT!) And yes, Portia's looking different, but her looks are not the result of aging but rather the result of synthetically fending off the process, which disqualifies her from the question. Meanwhile, Michael Cera looks starkly different from how I would have imagined adult Cera looking based on his appearance as an adolescent. It's like his face is simultaneously pointy and flat. I can't make sense of it!

It's entirely possible that we'll need some sort of tagline for Chaz, who could be every bit as destructive as Doo Doo in 2013. Here a list of potentials:

Leave yours in the comments.

@joelooney52 asks, "What 'hit' of Clowney's will be on the cover of NCAA 15? Will Vincent Smith be eligible to be on it, too?"

It's probably a hit that hasn't occurred yet, as I doubt EA would pull marketing visuals from seasons the game doesn't cover. More likely, it'll be some menacing visual of Clowney gazing over the upper bar of his facemask and rage-pointing at his assignment, or mid-stride en route to a sack. Some high action pose, is what I mean. By the way, isn't it cool to consider that Clowney stands a real chance to be the cover star of NCAA 2015? He's warrants enough pan-fanbase support that he'd run away with a fan vote, so long as he enjoys even half as dominant a 2013 as is being prognosticated.

@duke_willam asks, "Can we expect our actual fight song, geographically accurate stadium descriptors, and the right stadium name? I didn't buy last year's game but I assume it's still 'William-Brice Stadium by the banks of Lake Murray', and Fight Song #2."

I think they corrected the whole "William-Brice on the shores of Lake Murray" thing in last year's game, although I admit, I almost always silence the announcers because I don't need to hear Kirk Herbstreit admonishing me when I go for a fourth and 12 on my own 15 yard line. LET ME COACH THE WAY I WANT TO COACH, ASS. As for the fight song, I highly doubt it. Last year GABA spoke with Ben Haumiller of EA Sports, and he informed us that they simply haven't been able to secure the rights to our actual fight song, which is copyrighted by a third party. Hopefully I'm wrong, but I'd imagine we would have heard about it by now. Fight Song #2 will have to suffice—although I can assure you I'm customizing our stadium sounds before I even play a game.

@RubrChickens asks, "Jordan has Jumpman, Tiger has the TW flag, Kobe and Lebron have logos. Is it possible to fast forward 12 months and give us a glimpse of what the Jadeveon Clowney logo might look like?"

As a Professional Graphic Designer...I should really get back to work instead of writing this. Hey-oh! Also, here's my attempt at a face logo that I think could work for a line of Jadeveon Clowney skatewear: 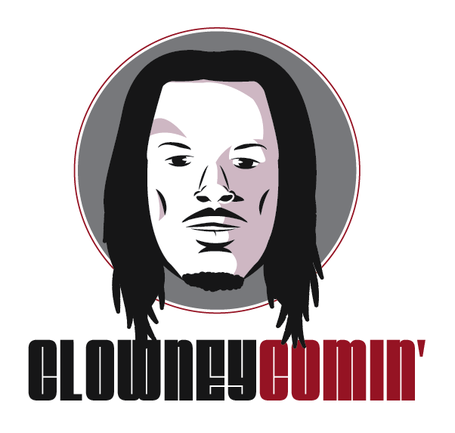 Anyone up for producing some unlicensed merch? I think that'd look swell on a trucker cap.

Any of you graphically inclined folks want to take a stab at designing Clowney's personal logo? E-mail your submission to gabamailbag@gmail.com and we'll feature it in the next GABAbag. Maybe a contest will grow out of it — who knows?

That's all for this edition of the GABAbag. Until next time!