Vanderbilt absolutely could not answer the game plan put together by Carolina, who put on yet another stellar offensive performance on Saturday evening.

For the third straight game, the Gamecock offense came out and performed very well, throwing up 35 points in only 10 possessions to help lead the Gamecocks to a 35-25 victory over Vanderbilt.

South Carolina marched up and down the field the first four drives, and Vanderbilt simply had no answer. Two plays they went to time and time again on those drives were the zone read with an arc block, and a zone read play that was packaged with a WR screen. It took the Commodores a half to finally adjust, and at that point, the game was so far out of reach that not even our shoddy special teams play could let them back into the contest.

Let's take a look at how both of these plays work, and how they were so successful for Carolina.

Vanderbilt came out with the goal of using the scrape exchange to contain both Connor Shaw and the Carolina running backs, but Carolina had an answer. 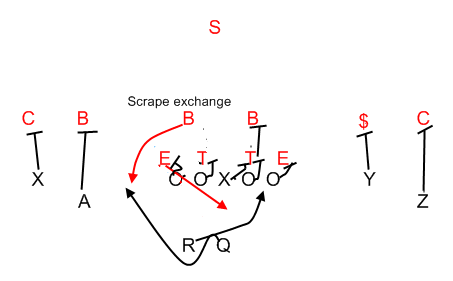 The problem for the Commodores is that the answer to this play is pretty simple and has taken root in football: the arc block. As you can see in the video below, the Gamecocks put a second running back in the backfield and have him lead block to the weak side (where the quarterback will run if he pulls the ball). Once the defensive end crashes, the quarterback pulls the ball, and now he has a lead blocker to take out the linebacker. Combined with good blocking by the line, the result is a 7-10 yard gain, as shown here:

A failed play is actually the exception that proves the rule - as you see here, later in the game Connor McLaurin missed his block on the OLB, which caused the play to fail.

The other adjustment the Gamecocks made to stop the scrape exchange was to run a "packaged" play, where Connor has the option of handing the ball off, pulling it and running (the classic zone read), but also includes a third option for a WR screen pass. We ran this play consistently and with a great deal of success. This play helps us achieve the same end as the arc block to counter the scrape exchange, but let's us do it from a trips receiver package instead of putting two running backs in the backfield (or pulling a TE).

The focus remains the same - the zone read is run based on if the defensive end attacks the running back or holds back and waits for the quarterback. If the former, the quarterback fakes the hand-off and then moves his eyes to the outside linebacker. This first read isn't as important against teams like Vanderbilt who sold out to take away the handoff for a large percentage of the first half.

The read on the outside linebacker is pretty simple - if he's coming in to take away the QB run, you just throw the screen pass. That way, with trips out wide, you've got two WRs to block two DBs, and the guy who was supposed to help take on the third WR (the OLB) is committed to taking out the QB, and thus can't really make the play. This is one of those plays that consistently picked up 5-10 yards for us, but could've broken a big play if one of our WRs could've beaten the Vanderbilt safety once or twice.

The Gamecocks used these concepts (along with some other timely pass plays and strong runs) to throw up 579 yards (in only 10 possessions). Unfortunately, since we didn't start any possession outside our own 25 yard line after our first drive, even this level of domination led to 1-2 wasted drives, particularly the final drive where we rolled up 64 yards but had to settle for a turnover on downs.

Despite those problems, the Gamecock offense answered the bell for a third game in a row. They'll need to keep it rolling out of the bye into Orlando, where a strong Central Florida team will be waiting for an out-of-conference tilt that I still can't quite believe we scheduled.