Experience has nothing to do with luck

Share All sharing options for: Experience has nothing to do with luck

As a young team, many subscribe the Gamecocks recent failings in close basketball games to more than simply "bad luck."  Some claimed in past years they lost close games simply because they needed to "learn how to win," while this year, even our fearless leader thinks Carolina loses close games in part because it lacks experience.

One thing that makes sports great - we can look to lots of data to tell us whether one of these theories holds up over time.  With that in mind, I pulled some data from 2013 and compared two things - "luck" and "experience."  If the two correlate, one may suggest the other.  If they don't, perhaps luck is just luck.

Before we look at the results, let's make sure we understand the terms I use above.  I use the definition (and the measurement) of luck from Ken Pomeroy's website.  Pomeroy uses a Dean Oliver invention, which defines luck as the difference between the winning percentage a team would expect based on its game-by-game efficiency ratings.  As Pomeroy explains, teams involved in lots of close games should win or lose about the same amount, and a deviation from a .500 represents what we call "luck" here.

I also used Pomeroy's definition of experience.  Simply put, Pomeroy adds up each minute played for each team and credits the team with 0 years experience for a freshman, 1 year for a sophomore, 2 for a junior, and 3 for a senior.  So even if a team has 5 seniors and 7 freshmen, if 1 senior played 20% of the minutes and the freshmen played the remaining 80%, their effective experience would be 0.20 years (80% times 0 + 20% times 3).  If the five seniors played every minute, it'd be 3.0 years.

If experience explains wins in close games (or as we've called it, "luck"), the two should correlate.  A reminder for those who haven't had statistics - correlation means they relate to one another.  So in this instance, more experienced teams should rate more highly in "luck" as they win more close games.  In the same vein, less experienced teams should lose more close games.  A perfect correlation is 1, random noise is 0.  As always, I learned everything from Wikipedia.

So what did 347 data points from the 2012-13 season tell us?  Luck and experience do correlate positively, though the r = 0.078.  That's incredibly weak, and basically random noise.  This may make more sense visually: 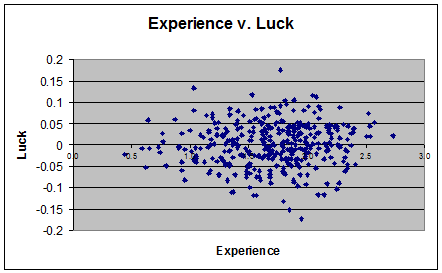 If Pomeroy's data were more easily available (for reasons that are boring, I couldn't go through more than one season without taking hours of time), I'd test this for past years.  Instead, i'd refer you to this link for a 2012 study that concludes basically the same thing.

Carolina lost a couple of close games over the last week and a half, and its frustrating to the players, coaches, and certainly fans that the Gamecocks did not win at least one of those games.  But they didn't win because they didn't make plays, which doesn't come from age - it comes from fortune favoring the other team.  Let's hope that evens out starting tomorrow night in Athens.