A Lighter Shade of Garnet Presents: The 1890-something South Carolina Baseball Team

A rare photo is unearthed. We break down the roster.

Share All sharing options for: A Lighter Shade of Garnet Presents: The 1890-something South Carolina Baseball Team 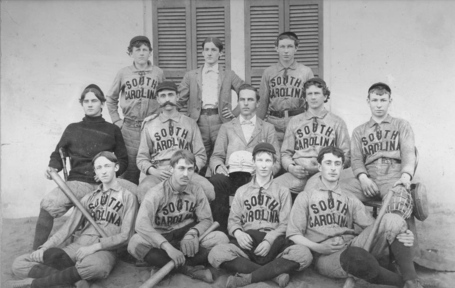 A team photo of a turn-of-the-century era South Carolina baseball team has surfaced. ALSOG historians have traced it back to the late 1890s. A look at the proud players that populated the squad:

Thaddeus McGovern: A rough-and-tumble freshman short-stop from Clinton. Devilish as a batsman, but his glove-game is in need of refinement and he'll need to cure of the hay fever if he's to play in the spring.

P. Arthur Tolliver: Statuesque first-baseman, he's far and wide known for his acumen as a ball-player...and his ribald ways with the fairer sex! Columbia debutantes: be warned!

Cedric Marner: Something of an unknown entity, Marner wandered afield, procured a bat and strode to home-plate despite the overtures of the coaching staff. He proceeded to swat three and four home-runs in sequence, and was offered a scholarship with immediacy. Harboring a sheltered romantic interest in Ernie Hutto.

"The Magnficent" Jasper Barnaby: A lad from the swampish wiles of Beaufort County, had nurtured a triumphal mustache since the tender age of eleven. Trampled to death by oxen shortly after being photographed.

Slider McMurray: Esteemed manager of the squadron. In its brief history, leads the program in victories with a staggering 16.

Mervin Sinclair: Bullish catcher, once took a fouled ball square in the reproductive cluster with nary a whimper.

Ernie Hutto: Rightmost outfield. Coveted romantically by Cedric Marner, a fact of which he is unaware.

Brutus Hoffstratten: Center outfielder. Second generation German, and aspiring pugilist who will eventually kill McMurray in a fistfight over the validity of the gold standard.

Christopher Lesesne: Much sought-after pitcher with a trajectory to play in the Major League ranks, until it is discovered that Lesesne is a tomboyish female posing as a male ballplayer and jailed for fraud.