After Thursday's game, several players and coaches fielded questions about the weather, conditioning, and being #gassed.

"I think I came out of the game more today than I ever did last year because of the pace of the game. So I was just very proud of the twos and the threes for coming in and not making mistakes."

Actually, USC Sports Information Director Steve Fink introduced this particular speaker as junior cornerback Vic Hampton. Is it possible that Fink, too, was delirious from the mid-90s temperatures at Williams-Brice and the UNC game's 6-hour, lightning-delayed running time? You bet. So I'll just include this screenshot from the press conference and let you decide for yourself: 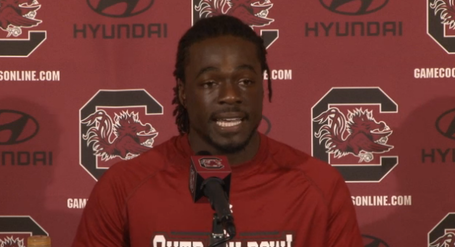 "I don't think it was just Clowney. The entire defense was winded," Defensive Coordinator Lorenzo Ward said of his unit, which held North Carolina to 3.7 yards per play on Thursday night. "We tried to simulate it in practice, but that team is the fastest team I've ever seen."

North Carolina ran 79 plays and moved the ball to the opposite hash play after play in an effort to - guess what - wear out the Gamecock defense. And while the Tar Heels were undoubtedly successful in causing South Carolina to become physically exhausted, getting the Gamecocks #gassed did little to improve the down-to-down success of Larry Fedora's offense or create opportunities for explosive plays.

"We tried to simulate it in practice, but [North Carolina] is the fastest team I've ever seen." - Lorenzo Ward, South Carolina Defensive Coordinator

Clowney's perceived lack of conditioning or effort or whatever was the central cog of not only the narrative emanating from the ESPN press box but also from the questions he was peppered with during the post-game conference. "Hold on. Let me tell you some stats," Clowney retorted with a laugh, as he reached for the stat sheet on the table in front of him. "You see that total yards they had? Last year they put up four or five hundred yards every game, and we held them to half of that... As long as we get the win, that's all that matters to me."

"We're conditioning well. We run every day. I run extra after practice sometimes. It's just some games* when you be out there, and it's just different from being in practice to being in the game."

*A game in which the opponent runs a hurry-up no-huddle offense during the hottest month of a city that has adopted the motto "Famously Hot", for example.

Had you simply watched the game on mute, you probably would have come away with the conclusion that Clowney was about as disruptive as expected on North Carolina's first two series and then was somewhat understandably given a breather after the Gamecocks scored 17 unanswered points to open the game. 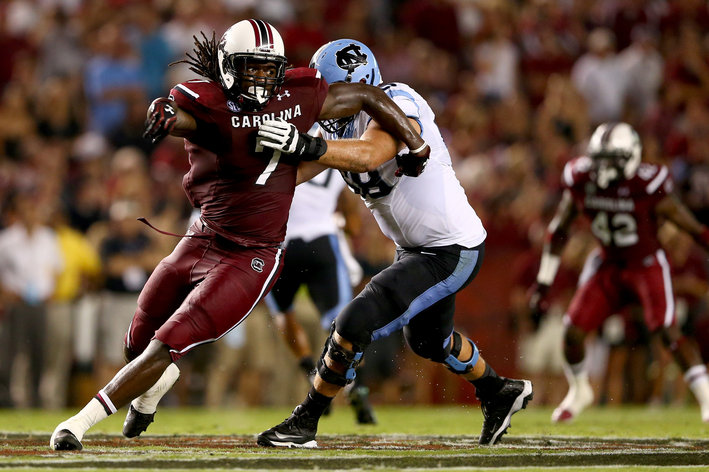 Clowney made a huge impact against North Carolina despite his lack of statistical production.

But those of us who listened to Jesse Palmer's commentary came to the informed understanding that Clowney spent the offseason doing nothing but counting down the days until the NFL Draft while slurping down coney dogs with extra chili.

For his part, Clowney, who was fighting through a stomach virus that prevented him from eating much except "a banana and some grapes", was not very interested in the ESPN crew's evaluation of his performance.

"Don't matter. We got the win. You see the score?"

When walk-on true freshman kicker Elliott Fry was announced as the starting kicker for the opener against the Tar Heels, most Gamecock fans immediately began envisioning nightmare scenarios in which North Carolina took the game down to the wire and South Carolina missed a late field goal to win or tie. But those concerns were put to bed with 4:59 left in the first quarter when Fry split the uprights on a field goal attempt about which there was never any doubt.

After the game, Spurrier seemed pretty confident that he wouldn't have to worry much about his placekicking situation going forward. "In the games, [Fry] is pretty good. Sometimes in practice he misses few. So I said to Elliott, 'Elliott, you're pretty good in games. I'm not going to worry about you. Just go kick like you do in games." All around, it was a pretty magical moment involving Steve Spurrier doing a Steve Spurrier impression. You should definitely check it out.

Starting boundary safety J.J. Marcus left the game with what appears to have been a sever shoulder injury. "He could be out for quite a while," Spurrier said. "That was an injury that could be severe." Lorenzo Ward added that his understanding is that Marcus sustained a separated shoulder. "Right now T.J. Gurley and Chaz Elder will both play the boundary safety spot." T.J. Gurley ended up leading the team with 9 tackles.

Victor Hampton made a pair of valiant efforts to get injured on reckless punt returns, including one that ended with this late hit that left the Gamecocks' best cover corner down on the field for a frightening couple of minutes:

Coach Ward hopes that his star defensive back learned some lessons from the hits he took last night:

"I just told Vic we don't need a courageous guy [returning punts]. He has to make better decisions. He should have either caught it or not even went near that ball. Vic has great courage, and you never want to take that away from a young man. But he has to be smart because with the kind of hits he took tonight, he wouldn't last the entire season."

Bruce Ellington (hamstring) eventually made his way into the game and recording a 17 yard reception. Ellington might be able to lighten Hampton's kick returning load once he makes a full recover from his nagging leg injury.

Spurrier, on two players suspended for the first half:

"Kelcy Quarles and Kwinton Smith both did not play in the first half. They had some academic issues. But they're full go the rest of the season."

Hey, maybe being down its second-best player for an entire half had something to do with why the defensive line looked #gassed.

Now pardon me while I go re-watch this game on mute.