Football season is over, but athletes posting (usually unintentionally) hilarious things on social media never stops. Join us as we count down the ten best tweets, Vines, and Instagram pics from the second football-free week of 2014.

South Carolina's 6'9 tight end/offensive lineman took a moment to point out the absurdity inherent to the annual round of contract extensions and raises for coaches.

Wish I got a six figure raise this year.. Must be nice.

8) Shon Carson makes it rain in the strip club

Believe it or not, this is as SFW as a Shon Carson Instagram picture gets.

With Bruce Ellington forgoing his final year of collegiate eligibility to enter the 2014 NFL Draft, Gamecock fans are unlikely to be amused by jokes about any further attrition to their receiving corps. But Shaq Roland pulled it off when he posted this video with the caption "It's been real USC I think I'm about to transfor #imsoicdc lmao."

Now entering the city of strippers and cocaine

I've long maintained that Drew Owens is the second coming of Devin Taylor, not because of anything he does on the football field--they don't even play the same position--but because they are both quiet dudes who occasionally turn up in photographs that simultaneously make no sense and make ALL OF THE SENSE. 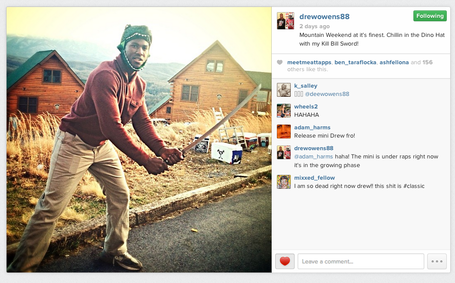 4) Scott Hood tweets about his colonoscopy

Though GamecockCentral.com reporter Scott Hood is not a University of South Carolina athlete--and thus not usually a candidate to be included in this countdown--The Cock Watch is a living, breathing thing, possessing an intense fascination with the bizarre, which happens to be the only adjective I can think of to describe this tweet.

Well, this has been an interesting day.Began with 1st colonoscopy (gotta get 'em, when you hit 50!) and ended w/ elite DB commitment 4 USC.

3) Vic and KQ contemplate the horizon

What makes this photo truly amazing is the knowledge that Victor Hampton handed his phone to a third party and said something roughly approximating, "Hey bro, do you think you could take a picture of me and my man Kelcy while we stare off into the ocean looking all pensive and shit?"

South Carolina's junior offensive lineman took the opportunity of Throwback Thursday (#tbt) to post a picture of him and his brother striking menacing karate poses, edited together in a way that was almost certainly not intended to be be hilarious but most definitely is.

In any other week, Matulis would be taking home the crown. But this week's No. 1 is destined for the Cock Watch Hall of Fame.

1) Freisman does the Nae Nae

There's something inherently hilarious about the very idea of kickers existing on football teams. On a roster filled with hulking, 250-pound man-beasts, here stands true freshman placekicker Elliott Fry, who--at 6'0, 150--would be considered skinny if you knew him as your pizza delivery guy. Fry took his fish-out-of-water routine a step further by doing the popular dance that we're being told is called "the Nae Nae" while being filmed.

What did we miss? There are a lot of Gamecock athletes and they frequently tweet about pretty mundane things, so it can be difficult to find the good ones amidst the "lol bout to get this meal in" tweets. If you've found a great one that we missed or that you think should be included next week, let us know! My email address is connor tapp at gmail dot com.