Which underclassmen will prove themselves ready to handle an expanded role this spring?

Share All sharing options for: South Carolina football: Five questions for the start of spring practice

Spring is the dominion of the troubled ex-four-star recruit who has "turned a corner" and finally "bought into the weight program." It's the time of year that the D.L. Moores and Lamar Scruggses pop their heads out of the ground only to see their shadow in August and retreat into the deepest caverns of the wide receiver depth chart until next spring.

But every now and then spring practice lends some real insight into which players will be stepping up and making significant contributions in the coming season. Having lost a pair of All-American defensive linemen and nearly their entire two-deep at cornerback, the Gamecocks certainly hope that will be the case when spring practice gets underway on March 4.

1) Who will replace Jadeveon Clowney and Chaz Sutton at defensive end?

As a true freshman in 2012, Darius English drew favorable comparisons to former Gamecock defensive end Devin Taylor. During his final year as South Carolina's defensive line coach, Brad Lawing said that English was the kind of player who probably would have been forced into action as a true freshman had he been with the program earlier in the Spurrier era, a time when the Gamecocks did not have the luxury of redshirting four-star defensive ends. Now entering his third year in the program, English has struggled to maintain the kind of muscle mass required to successfully to out-maneuver 300-pound offensive linemen. Last fall, English was, at 6'6, 226, still still more of a lanky power forward than an SEC defensive end. But he appears to have added some heft to his frame, checking in almost 20 pounds heavier at 244, according to strength and conditioning coach Joe Connolly.

.@GamecockFB strength coach @uscjoe21 told us Darius English is up to 244 pounds. Important progress getting beef on him to play DE.

On the other side of the line, the shorter, thicker Gerald Dixon will likely get the bulk (heh) of the first-team reps during spring practice. After failing to work his way onto the field during his first three years on campus and creating mass confusion by being a good 50 pounds lighter than his diminutively-suffixed half-brother of the same name, Dixon will need to firmly ensconce himself in the conversation for starting defensive end if he hopes to remain in it this fall. South Carolina will be getting some ready-to-play reinforcements on the defensive line this summer when Jhaustin Thomas, Dexter Wideman, and Blake McClain are expected to enroll.

Outside of English and Dixon, the Gamecocks have a pair of smaller ends in Cedrick Cooper and Mason Harris who were converted from linebacker. Both players likely have upsides of situational pass rushers. Rising redshirt freshman Devin Washington could work his way into the mix if he can prove that he wasn't set too far back as a result of missing all of 2013 with post-concussion syndrome. Gerald Turner and David Johnson will also be getting their first realistic shots at playing time after redshirting as true freshman.

2) Sorry to bother you, but do you have any cornerbacks we can borrow?

Jimmy Legree graduated. Victor Hampton left early for the NFL Draft. Ahmad Christian transferred. That string of events left redshirt sophomore Rico McWilliams as the only scholarship cornerback who took the field at the position in 2013. Even McWilliams has played sparingly, having missed all of the 2012 season after suffering a knee injury.

More: Dates, times, and locations for every spring practice and scrimmage

The defensive back prospect cavalry will arrive until the summer, but Grady Brown will have a handful of interesting options to tinker with in the meantime. For one, Jamari Smith is returning to cornerback after moving from the selfsame position to shore up the running back depth chart last fall. Brison Williams, who is entering his third year as a starter at safety, is also expected to take some reps at cornerback, if for no other reason than to cross-train him in man-coverage should he be needed in dime packages. (He probably will be.)

Ronnie Martin missed all of 2013 with a nagging hamstring injury (thank you based Akeem Auguste) after coming in as a JUCO transfer. True freshman Ali Groves redshirted while struggling through a shoulder injury. If healthy, both will have a chance to rebut the presumption that one of the incoming true freshman will win a starting cornerback job.

3) Who will replace the guy replacing Connor Shaw?

Even though there's turnover at the top of South Carolina's quarterback depth chart, there's little question as to who will be replacing the Gamecocks' winningest QB in program history. Dylan Thompson proved invaluable as a backup in 2012 and 2013 and will have his chance to run the show as a redshirt senior. The main source of intrigue this spring will be the battle for the right to be Thompson's No. 1 backup. Brendan Nosovitch and Connor Mitch are the main contenders here, though walk-ons Perry Orth and Austin Hails will no doubt earn lip service from the Head Ball Coach. He'll probably even go so far as to say that they're threats to win the starting job at some point -- because that's the kind of thing Steve Spurrier likes to say in April.

An early look at the 2014 quarterback depth chart

A look ahead at what the South Carolina offense will look like with Dylan Thompson in under center and which players will be competing to be his backup.

An early look at the 2014 quarterback depth chart

As a runner, Nosovitch isn't a burner like Shaw was, but he's certainly more mobile than Mitch. Nosovitch was ahead of Mitch on the depth chart in 2013, but that might have as much to do with the fact that the coaching staff didn't want to burn the Mitch's redshirt as anything else. The manner in which these two are utilized in spring and fall practice will give a much clearer indication as to which one has the upper hand for the starting job entering 2015 -- or 2014 if the The Lord, in His infinite wisdom, decides that Dylan Thompson needs to suffer a serious injury.

4) Which wide receiver will take a step forward?

Even if Damiere Byrd hadn't suffered a meniscus injury during bowl practice, his status is a rising senior and muti-season contributor on offense likely would have resulted in the Gamecocks' diminutive speedster getting relatively few reps during spring practice. With Byrd on the sidelines and Bruce Ellington in the NFL, Shaq Roland and Nick Jones are the only returning wideouts that South Carolina fans have been able to get an extended look at.

Pharoh Cooper made an impact during the home stretch of the 2013 season, but most of his contribution came as a punt returner or as a ball carrier out of the wildcat formation. Though there's little reason to think Steve Spurrier will do much to tip his hand during spring practice, there's a good chance that direct snaps to Cooper will occur more frequently now that the Gamecocks lack a homerun running threat at the quarterback position. This should result in increased opportunity for Cooper to show what he can do when the ball is sent his way via more conventional methods.

Beyond Roland, Jones, and Cooper is a handful of players who came in in as a high three- and low four-star prospects and but haven't quite been able to establish themselves as regulars in the wide receiver rotation. Kwinton Smith, Shamier, Jeffery, K.J. Brent, and Jody Fuller each give you plenty reasons to like them but have yet to translate talent into in-season production. Will that change in 2014? 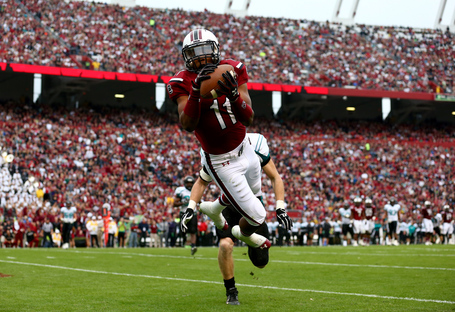 5) Is Abu Lamin ready to step in at defensive tackle?

South Carolina doesn't have a particularly pressing need at defensive tackle. J.T. Surratt returns as a starter in his senior season. Deon Green and Gerald Dixon, Jr. turned in strong performances backing up Surratt and Kelcy Quarles and appear to be read to take on bigger roles in the defense. But none of those facts temper the excitement that Gamecock fans will derive from watching JUCO transfer and early enrollee Abu Lamin suit up in garnet and black practice gear for the first time. New toys are always fun to play with, especially when they are 6'3, 300-pound defensive tackles. If he proves ready  to make an impact at the SEC level, it will add to South Carolina's interior depth and allow Lorenzo Ward show a variety of looks to opposing offenses. This offseason Ward has teased the idea that the Gamecocks might line up in a three-man front, and having a gigantic defensive tackle to eat up space will go a long way toward making that a viable option.

Now it's your turn! What crucial position battles did we miss? Who are you most looking forward to seeing in action this spring? By what date does the internet get its first topless photo of Steve Spurrier?