Brad Lawing's departure got a storm cloud over your head this morning? Then consider this news a ray of sunshine bursting forth from the ugly skies: Maryland OT Na'Ty Rodgers has verbally committed to the Gamecocks on the heels of his official visit.

The highly coveted OL recruit has long been considered a Gamecocks lean and had all but pared his list down to South Carolina at and Maryland. You'll recall Rodgers was slated to announce at the Under Armor All-America game, but decided not to pull the trigger which was probably good news for South Carolina, as it gave us ample time to work our OV magic. Rodgers, interestingly enough, is an Oklahoma legacy and held an offer from the Sooners, but they didn't seem to be in the mix. Perhaps Bob Stoops should have offered a more genuine "HULLO" during Rodgers' September 21 OV.

Rodgers is the fifth and final offensive line commitment for the Gamecocks, the 20th in the class. Rodgers is considered the 19th best OT in the nation according to 247Sports. Also: fantastic head of hair. 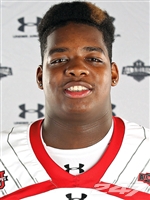 As with most O-linemen, look for Rodgers to spend a redshirt year adding weight and learning the system. But if all goes according to plan, he'll be protecting early enrollee Connor Mitch a few years down the line.