STUDY: Wal-Mart, Football Games, and 'The Car' most frequent settings for 'Missed Connections' in the SEC footprint

"You were one of the five thousand 19-year-old blondes in a black sun dress and Ugg boots. I was blackout drunk on Sailor Jerry's and on the verge of throatpunching the Georgia fan who was in the student section for some reason."

Share All sharing options for: STUDY: Wal-Mart, Football Games, and 'The Car' most frequent settings for 'Missed Connections' in the SEC footprint

As far as I can tell, Psychology Today is a completely legitimate academic journal. The selfsame scientific periodical recently published some data on missed connections compiled from Craigslist, detailing where and with whom missed connections are occurring most frequently.

Most of the results seem fairly obvious. Illinoisans are just missing out on love on the train, New Yorkers on the Subway, and Californians at 24 Hour Fitness. Bars are the most frequent setting for missed connections amongst 30-year-olds and men constitute 86% of the population who are hoping to find true love on Craigslist.

But the state-by-state results are where things get amazing, particularly in SEC country. Where are South Carolinians just missing out on love? Football games(!), which you would think would be the most SEC romantic destination imaginable until you look at where the rest of the SEC footprint is finding love: Wal-Mart.

You read that correctly. With the exception of Kentucky ("Supermarket", which - let's face it - is just a less awesome Wal-Mart) and Georgia ("The Car"*), Sam Walton's chain of discount department stores is the lover's lane for every state in the SEC footprint. Not even Missouri and its fancy pants AAU accreditation escaped the clutches of the Wal-Mart Belt.

And Ohio's inclusion in the Wal-Mart Belt only solidifies Urban Meyer's attempts to make Ohio State the first colony of the SEC North. 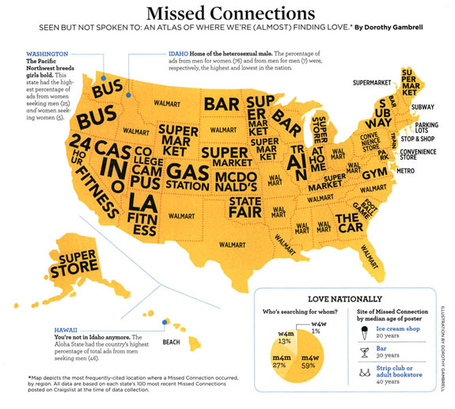 *The Car? WHAT THE HELL?