No Shoes, No Shirt, No Football Stadium: Kenny Chesney has left us no choice but to tear down Williams-Brice

Razing a perfectly good football stadium isn't anybody's first choice, but it's the only sure-fire way to prevent exposure to trace amounts of Kenny Chesney.

Share All sharing options for: No Shoes, No Shirt, No Football Stadium: Kenny Chesney has left us no choice but to tear down Williams-Brice

As many of you are aware, Kenny Chesney played a concert at Williams-Brice Stadium last Saturday. Should we have done more to prevent this tragedy? Absolutely. But there's no sense in pointing fingers now.

What's done is done. The concert was held. Thousands of innocents were subjected to "Beer In Mexico". Lorenzo Ward awkwardly flashed deuces in a photo with the diminutive country star. There is only one thing that can be done to to minimize any further collateral damage: tear down Williams-Brice stadium. 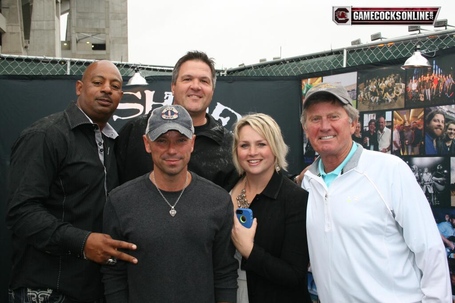 Look, guys. I don't want to tear down Williams-Brice Stadium either. I also didn't want my parents to euthanize our 12-year-old German shepherd, but the poor thing no longer had control of her excretory functions and had to be carried just about every where she went. It was the humane thing to do.

Why are Kenny Chesney and the residual Chesneydust that he no dobut left behind such a threat to the health and safety of the Gamecock football program and its legions of fans? I'm glad you asked.

1) Kenny Chesney will curse your college football program. The last time Kenny Chesney was near an SEC East stadium, he was the celebrity picker for ESPN Gameday when Chris, Kirk, and Lee visited Knoxville for for the 2012 Tennessee-Florida game. Chesney lazily pandered to his audience, a skill he has made a career out of, and picked the clearly overmatched Vols to upset the Gators. Florida went on to win 37-20 and, after a promising 2-0 start, The Volunteers went 3-7 the rest of the season. Derek Dooley was fired, and every single one of their offensive skill players on scholarship left early for the NFL. Look it up.

2) Kenny Chesney turns inanimate football cathedrals into ruthless killers. We already know that Williams-Brice Stadium perceives Kenny Chesney as a threat to its existence, evidenced by her attempt to devour his right leg, an event that should not be regarded as a fluke. Indeed, Billy Brice has shown that certain kinds of music can bring her to life and grant her an almost supernatural agency. Inviting Chesney back after "She Thinks My Tractor’s Sexy" gave The Cockpit a taste for human flesh when he visited in 2008 was an act of hubris that could needlessly expose hundreds of thousands of innocent Gamecock fans to the risk of being swallowed up by the East Stands Concourse.

3) Honestly, this song should be reason enough.

4) Kenny Chesney is an anagram for "Synch KNEE YEN" which is clearly a secret activation code to turn the turf at W-B into a sentient, ACL-eating monster.

5) Kenny Chesney wants South Carolina to go 5-7. Chesney's concert in Columbia was in support of his "No Shoes Nation" tour, a name derived from the title of his 2002 album "No Shoes, No Shirt, No Problems". Setting aside for a moment the fact that the album title makes me want to put my head through a wall, naming his current tour after an album that came out 11 years ago is akin to South Carolina putting out a 2013 football poster featuring Cory Jenkins, Andrew Pinnock, and Dunta Robinson. Do we really want to endure a repeat of the 2002 football season? I DIDN’T THINK SO.

6) Kenny Chesney is a shape-shifter with undetermined motives. He will wear whatever baseball cap or football helmet required to gain your trust (See: this, this, this, this) Don't be surprised if he is seen donning a tiger paw shirt at some point in the proximate future. What, exactly, is his angle? Was this concert part of a long con to get the Spurrier drunk and naked while the 5'3" changeling slips into Spurrier's office to steal the playbook? Probably.

7) 10 years ago there was Bob Hope, Johnny Cash, and Steve Jobs. Now we have No Shoes, No Shirt, No Jobs, No Cash, No Hope, and No Stadium.

Some positive externalities associated with tearing down Williams-Brice.

1) This would be a great opportunity to move the football stadium on campus. While Williams-Brice Stadium has been home to innumerable fond memories over the years, perhaps the chief knock against it is that it is off-campus. Its location at the intersection of George Rogers Boulevard and Bluff Road puts it a few miles from the heart of the Columbia campus, and – despite recent beautification initiatives – the surrounding area has a cold, industrial quality not indicative of the essence of living in Columbia. Plus, by the time you walk back from your tailgate back to The West Quad, you've totally lost your buzz.

2) Carrying steel girders on his back would be an efficient way for Jadeveon Clowney to cross train while contributing to the effort to build the new stadium. And, if I’ve learned anything from raising a pit bull mix, it’s that this kind of exercise may also tire him out to the point that sudden bursts of aggression can be avoided.

BTW, is Jadeveon Clowney sitting out in 2013? Asking 4 a friend thxbai.