This will be among the last times we discuss Kenny Chesney.

Time for round four of the GABAbag, wherein we talk Chesney, jeans, Charlotte, linebackers, and dopplegängers.

@Gamecock1998 asks "@GABAttack : What do you think of ESPN Predicting us to win the SEC East this fall?"

As far as I can tell this was an insider report, so I will not confirm or deny its validity! However, this writer is relatively unfazed by any such prediction since we’ve seen sources pick South Carolina each of the past two seasons without it coming to pass. While it's always nice to get respect from the national media, I'd rather not get picked and win than the opposite. Anyway, may their predictions prove accurate! For a nice breakdown of Vegas’ take on SEC and NCAA odds, head over to Chicken Hoops.

@TeamGarcia5 asks "If Steve Spurrier were a Kenny Chesney song which one would he be? #GABAbag"

As mentioned on the Half Cocked podcast, I know exactly two Kenny Chesney songs, so I had to find a list on a site called BestCountrySingers.com, a name which leads me to question their understanding of the word "best". At any rate, I’m going to go with "All I Want for Christmas Is A Real Good Tan" which is a aggravatingly stupid name for a song but probably isn’t far from the truth for Spurrier. "Let’s get this bowl game played already. HBC’s gotta catch a charter to St. Thomas."

@chickenhoops asks, "Where does 'scheduling an away game against UCF' rank among cheapskate decisions made by Eric Hyman?"

I can't think of a yet-to-be-played game that's caused more frustration than our baffling trip to Orlanda to face UCF, comin' at you this September. As noted in the question, this is a vestige of the Eric Hyman era. I can't claim to be an authority on Hyman's bumbles as AD, but our own Tryptic wrote a piece last July that documented seven of Hyman's poorest legacies as head honcho. Where does an early season @UCF matchup rank for you?

@RubrChickens asks "Where is that fine line between success and failure for the USC football team in '13? Is it SEC title game or bust?"

My line is always "win the games that are inexcusable to lose", which become more and more in number as the team improves. It’s for this reason I put 2012 ahead of 2011; we didn’t have an Auburn. Both our losses were road games in difficult environments. Granted, we certainly played inexcusably at Florida, but dropping one in the Swamp isn’t especially difficult to comprehend. Still, one would think 2013 could chart the path to Atlanta considering the schedule and the skill position depth and the Clowney.*

As a visual supplement to how I'll respond to the upcoming season, I threw together these graphs representing my projected satisfaction levels based on various win totals, starting at 9 because anything less would be a bust. The first graph is representative of no SEC title, and vice-versa for the second one. 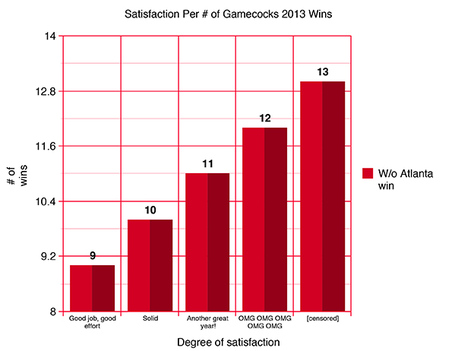 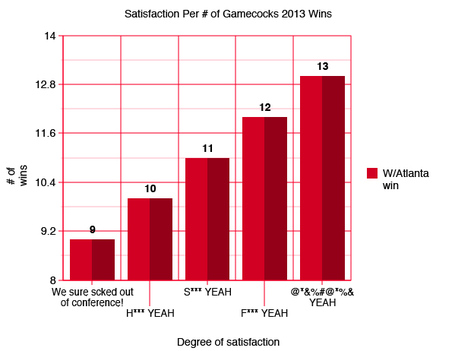 Marc asks "LB seems to be the biggest question mark going into the season. Who emerges from those 3 positions and which true freshman has the best chance to come in and challenge for playing time?"

What with there being jack squat in the way of returning linebackers, I view the returning linebacking squad as posse of faceless, silhouetted characters, like placeholder mugshots on video games when they don't have the likeness rights to a player. That said—Kaiwan Lewis and Kelvin Rainey come to mind. As for incoming freshmen, Larenz Bryant was the jewel of the 2013 recruiting class and one would imagine that the opportunity is there. I also want freshman Skai Moore to play early and often mostly so I can say and write Skai Moore a lot. Skai Moore.

account-opening package in my bank here in Hong kong where I am a bank director.

In other to achieve this, I shall require your full name, and telephone number to reach you.

Most importantly, a confirmation of acceptance from you will be needed after which I

shall furnish you with the full details of this transaction.

@phonehand asks "IMO Charlotte is really boring; surely there is a better city to have the SC vs NC series. Can you think of one or two?"

What about Asheville? Beautiful mountain scenery, an array of delicious craft beer, and—ah, the hippies. They wouldn't take kindly to hordes of sports fans descending on their sleepy little patchouli oasis, would they? Eh, screw 'em! I wanna see a football game and then catch a Spoon show at the Orange Peel. Now, we'll just need an 80,000 seat stadium. Someone get on that.

On the South Carolina side of things, how about Myrtle Beaahahahahahaha just kidding. No one should ever go there.

@HalfCockedShow asks "What brand of jeans would be the most, um, fitting sponsor for Williams-Brice Stadium?

This question coming on the heels of the announcement of Levis' sponsorship of the 49ers' new stadium. When I hear "jeans" and "Gamecocks", I'm reminded that Dale Earnhardt Jr. is on the record as being a Cock supporter. Not to stoop to tired wordplay, but don't all signs point to us going with Earnhardt sponsor Wranglers and their proprietary Johnson-scoop?

@lizzy_mcnamara asks "Who are the team's doppelgängers?"

A good and important question, Lizzy. To get to the bottom of this most pressing issue, I consulted a celebrity doppelgänger website. It's a service that allows you to upload an image and, through the magic of Internet™, it will provide a celebrity lookalike. We go to the pictures:

Let's start at the top: Spurrier! 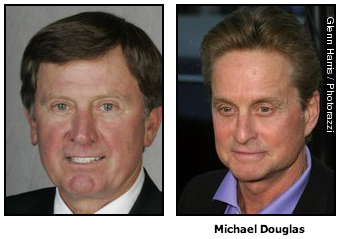 This isn't a knockout but they're both ruddy, bejowled 68-year-olds with impeccable heads of chestnut hair. I could see Michael Douglas at least portraying Steve in a biopic. I'll allow it.

Next up: Bruce Ellington. 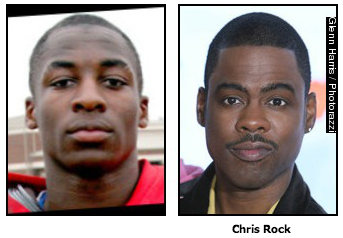 Ooo...kay. Maybe if you squinted and, like, stood twenty feet back from your monitor, you could see it. The oval-shaped heads are there, if nothing else. C+. 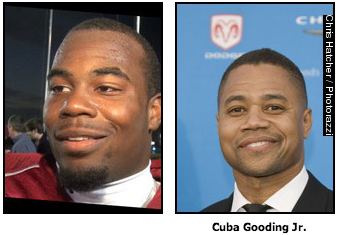 I gotta say, that smirk is damn near identical. Eyebrows and noses too. Obviously there are a few major superficial issues, but I'm still impressed that they nailed the facial expression. We hope Mike withholds all chants of "SHOW ME THE MONAAAY" until his NFL draft. 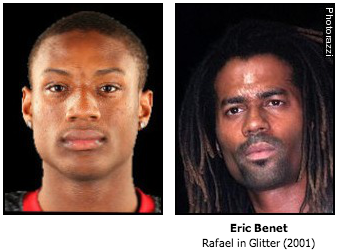 What the!? Eric Benet? First of all, lol @ "Rafael in Glitter" being his celebrity reference. But more importantly, I don't see this one—maybe a slight likeness in cheekbone structure, but little else. If anyone, Benet looks more like a super-GQ Clowney, what with the hair. Hey, I bet if I put Jadeveon's picture in the thing it'll bring up Benet again. 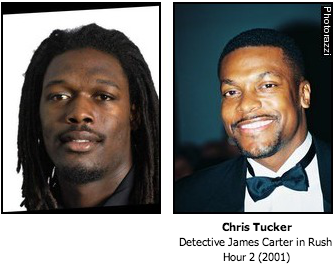 Huh? Does it strike anyone else that the last two pairings should have been reversed? I'm starting to think this free, ad-splattered website isn't trying very hard.

Oh hey, there's an option to choose the gender of the celebrity. Haha, yeah right! Like I care what female celebrity this dumb ol' site would compare to Jadeveon Clowney. 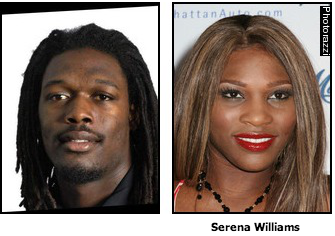 HA UM OKAY this is getting kinda bizarre so let's refocus. How about the Flowery Branch Kid himself, Connor Shaw? Now this one's easy, celebrity-matching website. Surely there's some chrome-domed superstar you can dig up from your archives. Bruce Willis? Michael Chiklis? Dr. Evil? Let's see whatcha got: 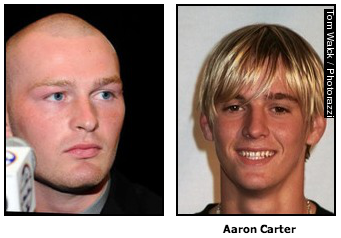 You know I think it's time to wrap this up. We end with a player who's no longer on the team roster but will always have a place in our hearts' roster: Marcus Lattimore! Let's see if it ends on a high note: 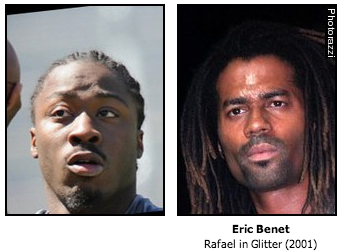 Once again, we got a few late questions so we'll get to those next week. Until then, be sure to tweet us (@GABAttack) or mail us (gabamailbag@gmail.com) your questions/comments/spam.