Watching Steve Spurrier talk is a fun thing to do, so watch the full video here. If you're pressed for time, read below for the comments that we deemed to be the most insightful/amusing.

How is Mike Davis's ankle?

He told me he wasn't hurt. Trainer came over to me during the [Vanderbilt] game and said Mike Davis twisted his ankle. So when I came in here after the game a couple of weeks ago, I said, "Mike Davis twisted his ankle, but he's going to be OK." And then some of you guys asked him how his ankle was, and he said, "There's nothing wrong with my ankle"... Our communication got a little offbeat between [Davis], the trainer, and me. So hopefully we can correct that.

Will we know who the identity of the starting center prior to kickoff?

Yeah, hopefully we'll have it settled. Cody [Waldrop] was able to practice a little bit last night. I don't know if he's 100% yet. But we'll have to make that decision probably Thursdee. Sumthin' likaat. We're sorta alternating in practice right now... Clayton [has] played very well. There could be a chance both of them play in this game. We'll just have to wait and see.

What did the team work on during the bye week?

Go ahead and laugh at your own joke, Coach. You earned that one. 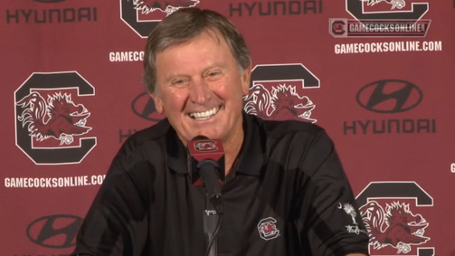 What has been the big play on special teams in the first three games? Any body thinka one right off the bat? Ah! They fumbled. North Carolina fumbled right to Damiere Byrd. He was down there to recover the fumble. Georgia dropped the punt. That's our two biggest plays right there. The other team dropped the ball. So we've got a lot of work to do.

How has Connor Shaw played so far this season?

He's playing well, but there's a lot of plays he can do better... He takes care of the ball extremely well. I watch some of those NFL guys toss those careless interceptions, and I say, "Our guy doesn't do that." He's careful where he throws it. Of course, his ability to run out is very helpful, also. And Dylan played very well the other day. The one throw could have been a jump ball or hit the ground, but it didn't, and they had a big play off of that. But other than that, Dylan was very good. And there's a chance he's going to play, also, in this game.

When did you meet Central Florida coach George O'Leary? Was it in the 80s? Does he play golf? How well do you know him?

I don't know the first time I met him. Probably back in the 80s. He plays a little golf... I know him to say "hello."

What kind of challenges does the UCF defense present?

Their defense is sound. They disguise their coverages well... Their kids are flying around and very seldom out of position. They play very similar coverages that a lot of schools do, and they play them well.

They were running around OK yesterday and should do everything today - all the drills and running afterwards and so forth. So they're ready to go... It's supposed to be a good, hot day down there. I told Jadeveon, "You need to get in better shape. It's gonna be another hot day." But hopefully his foot will be alright and all of our other minor injuries will be ready. It's gonna take everybody playing their best if we're going to have a chance to beat Central Florida.