No, Mark Richt did not spend the night with Bryson Allen-Williams

The threat of snow sent the Southeast into a state of delirium on Tuesday night. One of the region's hallucinations was that the inclement weather forced Georgia's head coach and defensive coordinator to shack up with a four-star outside linebacker.

Share All sharing options for: No, Mark Richt did not spend the night with Bryson Allen-Williams

This is a real thing that four-star outside linebacker and South Carolina commitment Bryson Allen-Williams felt compelled to tweet on Monday evening after an internet rumor surfaced that he, Mark Richt, and Jeremy Pruitt were having a sleepover.

Lol who made up this rumor of Coach Richt being stuck at my house ????

You see, the longtime Georgia head coach and his new defensive coordinator had been snowed in, as the story went, providing them with a unique opportunity to sway the steadfast South Carolina commit while staying up past curfew and giggling over the latest edition of Seventeen magazine from their bunk beds. All the while, of course, taking advantage of a nonexistent snow day loophole in the NCAA recruiting rules.

As far as I can tell, the rumor that Mark Richt was spending the night with Allen-Williams and his family in Ellenwod, Ga. emanated from a tweet published by Atlanta Journal-Constitution recruiting analyst Michael Carvell.

Looks like #UGA Mark Richt is stuck in ATL at house of SC commit. Hes not going anywhere w/snow&traffic for 2-3 days: http://t.co/0PjI0N6YjK

Carvell is known to stir the pot on Twitter from time to time, especially on behalf of UGA. This time around, for reasons unknown, Carvell thought it worthwhile to take the testimony of Dawgs247 message board poster airforcedawg at face value and issued a series of tweets reinforcing the idea that Mark Richt was spending the night with Allen-Williams, even after I had attempted to alert him to his folly.

It still is, if you're stuck at a recruit's house RT @DanWolken I’m sure recruiting in Atlanta today seemed like a good idea at the time

RT @RadiNabulsi If Mark Richt flips a top SC commit after getting stuck in recruit's home due to snow storm..greatest recruiting story ever.

There were plenty of reasons to greet this report with immediate skepticism, the most concrete of which was the fact that Allen-Williams tweeted at 3:21 p.m. EST--with no apparent reason to lie--that Mark Richt had left his house.

If proven true, Richt somehow managing to back into an opportunity to spend 24 uninterrupted hours with South Carolina's most highly-rated commitment would have been huge news in advance of Allen-Williams' Jan. 31 official visit to Athens. Fortunately, for the Gamecocks, it was all a fabrication. Darnisha Allen-Jackson, Bryson's mother, issued this denial to go along with her son's. 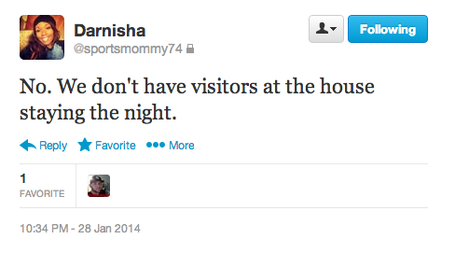 In fact, when rumors were at peak intensity--around the time BAW, Richt, and Pruitt would have been getting bored with truths and getting into some more risque dares--Allen-Williams was on the air with Phil Kornblut affirming the solidity of his commitment to South Carolina. "I've been doing so much on this recruiting trail for South Carolina that [fans] should have no doubt that I'm going to be a Gamecock fan come signing day," the 6'1, 222-pound linebacker told Kornblut.

Asked if he could see anything that would turn him from his USC commitment following his Jan. 24 visit to Alabama and with his trip to Georgia on deck, Allen-Williams responded, "No, sir. I don't really see anything."

Nor does it seem likely that South Carolina's newfound depth at linebacker will be an effective tool to drive a wedge between BAW and the Gamecocks in coming weeks. Bryson seems to understand and embrace the reality that immediate playing time isn't likely to come. "I'm not saying I'm going to start as a true freshman," Allen-Williams said. "I'm not even saying I'm going to play my first game at South Carolina. I'm going to earn my way. That's something I've always known how to do."

Bryson will be joined on his trip to Athens by four-star cornerback Wesley Green, who has narrowed his decision down to a choice between South Carolina and Georgia.

"I think Wesley's all Gamecock," said Allen-Williams. "That's my personal opinion. I think he's just going to Georgia to what they have to say also. I'm going to leave him alone on the visit. I'm going to have fun with him because we're good friends, but I'm not going to try to sell him on South Carolina because I think he already knows everything he needs to know. Come signing day, I think we're going to get him."

Bryson said that he's expecting to sign his National Letter of Intent at 9 a.m. EST during a ceremony at Cedar Grove High School.