After a strong finish to the regular season, the South Carolina Gamecocks had a very disappointing couple of games in Hoover last week in the SEC tournament.  However, Coach Holbrook reminded the media on Monday that "all is not lost when you lose in Hoover" and said that the team has had some good practices since returning to Columbia. With Hoover and its accompanying struggles in the past, the Gamecocks have turned their attention fully to the most exciting part of the season: the NCAA Tournament.

Entering the NCAA tournament, the Gamecocks are the healthiest they've been in quite a while. Elliott Caldwell is still out with a back injury, and is not likely to be back this season. However, everyone else should be ready to go this weekend.  Max Schrock and Connor Bright have both gotten playing time over the last couple of weeks, but should be even closer to full strength this weekend. Several players have consistently stepped up this season to fill the void left by injured starters. DC Arendas has played at second base most of the season and Coach Holbrook has repeatedly praised Gene Cone and Patrick Harrington, both of whom saw a lot of playing time in the outfield in the second half of SEC play. If Schrock and Bright can keep healthy enough to stay in the lineup after reentering this weekend, the depth and experience that the Gamecocks have should serve them well in the tournament.

The Gamecocks are 42-16 (18-12) entering the tournament and are ranked 13th in the official NCAA RPI. Unsurprisingly, the offensive numbers for the Gamecocks dipped a bit during the poor showing in Hoover. Carolina is now hitting .279, with an on-base percentage of .360. Four Gamecocks are currently hitting over .300: Connor Bright, Kyle Martin, Grayson Greiner and Joey Pankake. Though he is third on the team in batting average at .328, Greiner leads in almost every other offensive category.  His slugging percentage is .515, his OBP is .403, he has 50 RBI and eight home runs.  South Carolina's pitching numbers are still great, though at 2.37 the ERA has slipped to 8th in the country (and it actually says a lot about how fantastic the ERA has been all season that 8th feels so low).  Carolina's strikeout-to-walk ratio (3.00) is still top ten in the country as well. The Gamecock bullpen, anchored by Cody Mincey (1.04 ERA) and Joel Seddon (0.85 ERA), is probably the greatest strength of this team. Due in large part to the great performance of the relievers, South Carolina is 31-2 when leading after seven innings and 5-0 when tied after seven. Coach Holbrook emphasized on Monday what a luxury it is to have a bullpen that's so reliable and that can be counted on anytime the starters have issues. The Gamecocks are in the top 25 in the country in fielding percentage at .975 and have three players that made the SEC All Defensive team: Joey Pankake, Grayson Greiner, and Tanner English.

While the offense has been frustratingly absent at times for this team and stranding baserunners has been a concern, the Gamecocks have also had plenty of timely hitting and demonstrated an ability to get runs across against talented pitchers.  If the Gamecocks can produce runs more consistently, that, coupled with their stellar pitching and great defense, will be enough to keep them competitive against any team in the country and will set them up for a good run in the NCAA Tournament.  The opportunity to play at home on the beginning of that postseason road is one that shouldn't be taken lightly. On Monday Coach Holbrook urged fans to come to the games and help create the kind of atmosphere that will make a difference and help the team to advance. 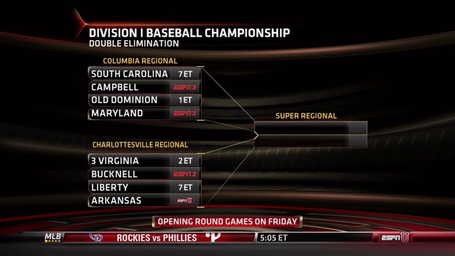