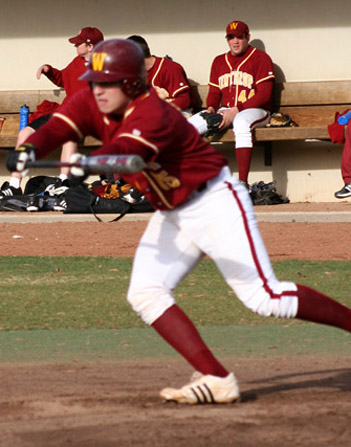 USC takes on Winthrop in the mid-week game. (via www.winthropeagles.com)

7's the key number here. Think about it. 7-Elevens. 7 dwarves. 7, man, that's the number. 7 chipmunks twirlin' on a branch, eatin' lots of sunflowers on my uncle's ranch. You know that old children's tale from the sea. It's like you're dreamin' about Gorgonzola cheese when it's clearly Brie time, baby. Step into my office.

The South Carolina Gamecocks have now won a record seven SEC series in a row, not counting last season. This weekend the Gamecocks asked the Alabama Crimson Tide to step into their office, and, well, you know the rest.

Analysis after the jump.

On Friday USC starter Blake Copper pitched for his first no decision since starting SEC play. Cooper went 6.1 innings with 4 ER, 3 SO, and 1 BB. Even without his best stuff, copper put Carolina in a position to win. It was the relief pitching that let USC down this time, as Price and Neff combined to give up a 3 run homer to 'Bama short stop Josh Rutledge in the 9th. The 'Cocks persevered, though, and held Alabama scoreless until senior catcher Brady Thomas hit a walk-off two-run home run in the bottom of the 11th. Crowds cheered. Women swooned. The 'Cocks won 9-7.

USC did not fare as well in the Saturday match-up. Starter Sam Dyson lasted 7.1 innings, struck out 10, walked 1, but somehow allowed 5 earned runs. By all accounts Dyson pitched well, however 'Bama was able to capitalize on some good fortune in the 2nd inning. That inning was kept alive by multiple bloop hits off the end of the bat for the Tide. Dyson got the lead-off batter to strike out looking, but allowed the next 5 batters to reach base as follows: single, single, double, single, single. Tanner said as much, himself:

"I think you have to give credit to Alabama, they found a way to get some hits in that inning. I think it was a six-hit inning and he only gave up eight in the game and a couple of them weren't hit that well but they look like line drives in the book. Sometimes you don't get a ball down enough or finds enough barrel it drops in. But he was really good other than that inning and Morgan was really good. We got the two runs early and he stuffed us in the middle innings. But (Christian) Walker got us in the game a little bit but it was a well-pitched game by both guys with the exception of one inning each."

Dyson was locating his pitches well as three of those hits came when Dyson was ahead in the count. That's the game of baseball, though. Dyson pitched well but still recorded his third loss of the season. USC fell 6-4.

On Sunday USC belted out a season best 20 runs on 25 hits. Alabama made a game of it, scoring 15 runs themselves. However it wasn't enough to hold off a potent Gamecocks offense feasting on a depleted Alabama bullpen. 'Bama went through 8 relief pitchers to USC's 6. For the second weekend in a row Sunday starter Jay Brown failed to make it to the 4th inning. USC has struggled with finding a Sunday starter all season, and it looks as if we may head into the post season with a starter-by-committee. Nolan Belcher currently has a 2.75 ERA on the season, so I wouldn't be surprised to see him get another shot at the Sunday position next week. He hasn't seen much action in the last few weeks. In any event, the end result was a 20-15 win, and you can argue too much with that.

So how does this latest series win affect USC? Well, in this week's iteration of the polls USC ranks highest at 4th (Collegiate Baseball) and lowest at 11th (NCBWA). Don't ask me why we went down in Collegiate Baseball's estimation after taking 2 of 3 from the 17th ranked team in the RPI - I don't know. Interesting side note: our sweep of UGA last weekend actually caused us to drop six spots in the RPI to 18th. (At the time of this writing the new RPIs aren't up, but I will update as soon as they are.) The Gamecocks (34-9, 16-5 SEC) are still in 1st in the league, but Florida (31-11, 15-5 SEC) is now only 1 game back. Arkansas (35-10, 14-7 SEC) is now 2 games back. Carolina is still in a good position with only 3 weeks left in the regular season, but they'll need to stay focused against Kentucky this weekend to make sure they don't lose ground to Florida or Arkansas. Florida is playing some of it's best ball of the season right now. This past weekend they swept last year's National Champions, LSU, in convincing fashion. It would be nice to have at least a two-game cushion going into the last two weeks of the season since it still looks like those weeks will decide the SEC regular season champion.

In other news, apparently Ray Tanner had a bout of vertigo prior to Sunday's match-up. He was able to coach, but wasn't around for the presser after the game. Everyone here at GABA wishes Tanner a speedy recovery. We need you out there, coach! Here's what Coach Holbrook had to say about the situation.

"I'm pinch-hitting for Coach Tanner. He has a bout of vertigo. He was seen by Dr. Johan Hernandez this morning. We didn't know he was going to be in the dugout until right before the game started. The doctor got him at least where he could get in the dugout. Once he got in the dugout the energy got flowing a little bit and he did help us out quite a bit. He is in tough shape so that's why I'm here in the place of him."

This week USC takes on Winthrop on Wednesday before the weekend series at Kentucky. USC leads the all-time series with Winthrop 14-6.