Five observations from our first day in Tuscaloosa.

Share All sharing options for: Friday Night in T-Town

As we mentioned on Friday, the fine folks at Hampton Inn put us up in Tuscaloosa, Ala. last weekend so that we could immerse ourselves in the culture of Alabama football. This is what we discovered on our first night in T-Town.

1) Nick's Original Filet House is a charming hole in the wall. One of the Tuscaloosa restaurants that was most heavily recommended to us was a place called Nick's In The Sticks. Google recognized no such restaurant but did turn up Nick's Original Filet House. After becoming satisfied that the two were one and the same, we set forth in search of Nick's and found that it is, true to its moniker, located in The Sticks. Yelp! reviews bemoan long wait times, but The Feathered Warrior and I were seated no later than 15 minutes after our arrival and were able to head inside to get a drink -- Nick's signature, the Nicodemus -- while we waited. 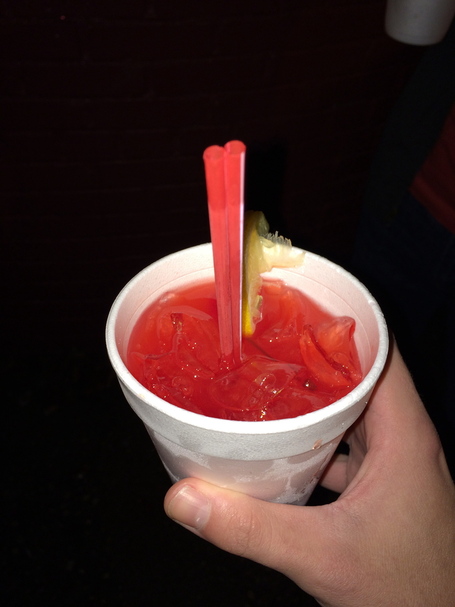 My order wasn't exactly right, but it wasn't worth sending back the baked potato for the onion rings I had requested. The bacon-wrapped steak I ate was tough and probably the rarest medium-rare steak that I had ever eaten, but it was steak for less than 10 dollars. The Feathered Warrior and I agreed that, while we weren't exactly blown away, Nick's was the kind of place that we probably would have fallen in love with had we spent four years in Tuscaloosa and gone there with friends every couple of weekends for cheap dinner and potent drinks.

Also, a college-age patron shouted this at one point.

2) The people at the Tuscaloosa Hampton Inn on Harper Lee Drive are really, really nice. "Your first time in Tuscaloosa?" asked the lass behind the front counter, already certain or the answer.

How was she able to discern this truth about us on sight alone? Perhaps it was the Block-C logo on the left breast of The Feathered Warrior's button-down shirt. Or perhaps it was my standard-issue hipster uniform, complete with thick-rimmed glasses, plaid shirt, and a receding hairline that is partly genetic and partly the result of spending two and a half years as a vegetarian without taking any dietary supplements. More likely, it's just a polite thing to ask and statistically probable, given that we're staying in a hotel, rather than with friends or family.

Upon confirming that we had not heretofore stepped foot in T-Town and that we were visiting for the game, the desk attendant gave us a pair of complimentary game programs, handed us information about the game day shuttle (more on that tomorrow), and let us know that free catering would be provided by Jimmy John's and Buffalo Wild Wings after the game. When we entered our room, we discovered a Crimson Tide-themed care package wrapped in a houndstooth bow, complete with Alabama apparel and enough candy to clinch a future diagnosis of adult-onset diabetes. 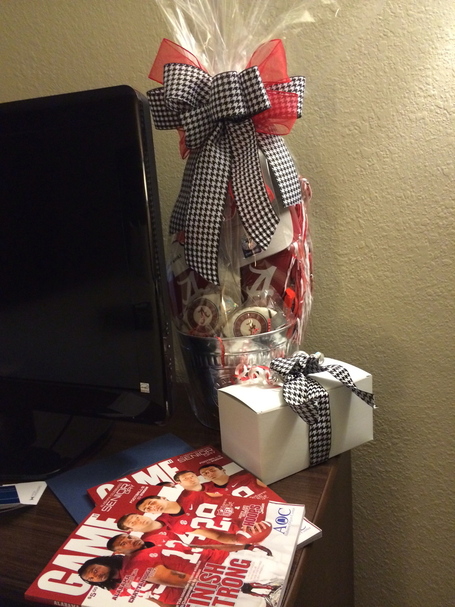 3) The Paul Finebaum Show is... HOO BOY. Yes, I had streamed the Paul Finebaum Show on my phone before, but there was something special about being able to hop in the rental car and tune in to WJOX to listen to Finebaum over the same airwaves that so many of his infamous callers do. The 30 minutes or so that we were able to catch were predictably strange, with callers chiming in on subjects ranging from BCS scenarios (Do you think a one-loss Auburn team would get in ahead of Ohio State and Baylor, PAWWWL?) to the Jameis Winston investigation (I could tell he had character issues from things I eye-witnessed him doing on the sidelines, PAWWWL) to the JFK assassination (It was an inside job, PAWWWWWL).

The most fascinating thing to me is how so many callers seem to believe they have a personal relationship with Paul. ("Do you remember what I told you the last time I saw you, PAWWWWWL?" is a question that gets frequently asked.) Paul indulges it on-air, and I honestly don't know enough about the man to know whether it's sincere or just good customer service.

4) I did not fully understand the usage of "Roll Tide." The seed of the thought was first planted in my head when listening to callers say "War Eagle, Paul" or "Roll Tide,Paul" after they had finished making their points and were getting ready to hang up. But after overhearing several conversations in Tuscaloosa, it finally occurred to me that that that "Roll Tide" and "War Eagle" aren't merely battle cries but valedictions that could just as easily be replaced with, "I love you, Mom. Drive safe." I brought this up with The Feathered Warrior, and he told me that he wished that South Carolina fans had something like this. If we did, what would it be? "Go Cocks"?

5) Zaxby's chicken is absolutely terrible and its self-appointed reign as the official chicken of college sports should be upended immediately. There was a time in my life when I regarded going to Zaxby's as an escape from the blandness of typical fast food. Like, maybe a rung below Chick-fil-a. From the time that I left South Carolina in the summer of 2008 to my next experience with Zaxby's last Friday, I longed for the day that I would once again unite chicken strip with Zax sauce. In retrospect, I have no idea how I came to hold to hold this nuclear waste in such high regard. After my experience last Friday with a chicken finger plate off of I-20 near Birmingham, Ala., I now understand that Zaxby's chicken is just three pounds of table salt molded into the shape of a chicken strip. It is the worst thing that has ever happened to my mouth, and I wanted to die during most of the five hours after I ate it.

We did not go out on the town on Friday night--partly because of a long day of travel, partly because the game between the Crimson Tide and the Mocs was set to kick off at 1 p.m. local time, and partly because of Zaxby's-related indigestion--but we did hit most of the bars on The Strip on Saturday. More on that Tomorrow.