Garnet And Black Attack was on the scene to take in Alabama vs. Chattanooga.

Share All sharing options for: Game Day in Tuscaloosa

There was much for the The Feathered Warrior and me to do and see on Saturday, so I woke up before 8 a.m. for the first time in approximately forever and made my way down to the lobby of the Hampton Inn to load up on free breakfast.

Heading out to the Bear Bryant museum. But first! Free breakfast at Hampton. http://t.co/Ik5RrktP0B #hamptonality pic.twitter.com/KFGYIBgJl9

After a quick trip back to the hotel room to add some layers in preparation for blustery conditions in Tuscaloosa, we began a 10 minute walk to the nearest pick-up location for the The Crimson Ride, the University of Alabama's free game day shuttle service. Our stop was just outside the U of A aquatic center, where we saw this.

The shuttle that we boarded was completely empty, which gave us an opportunity to chat with the driver, who could not believe how lifeless campus seemed on the day of an Alabama football game. The last day that she worked was the day of the LSU-Alabama game, so her surprise was understandable. Correctly assuming that we would be intoxicated our our return trip, she also quizzed us on which stop we got on, but how could we forget? THE ONE WITH THE GIANT-ASS SLIDE.

All aboard the Alabama Crimson Ride gameday shuttle. #hamptonality pic.twitter.com/EsV8eIJFn4

We had intended for our first stop to be the Paul W. Bryant Museum, but we got caught up taking pictures of bus seats and whatnot and missed our stop, so we checked out The Quad and the Denny Chimes instead. 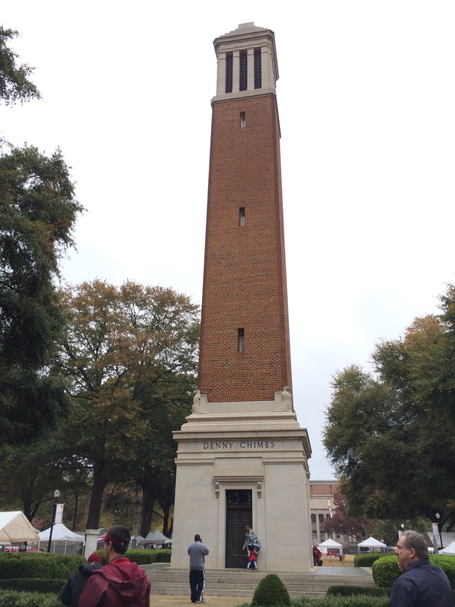 On each side of the clock tower are the hand- and cleat-prints of the Alabama team captains going all the way back to 1947. 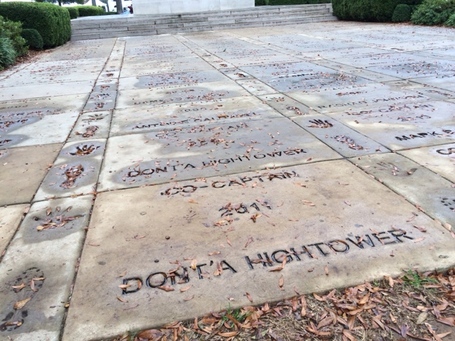 After check out the Chimes, we made our way down the the Paul W. Bryant Museum. Even though we were just hours from kickoff at this point, the museum was packed with Crimson Tide fans looking in connect with their past. 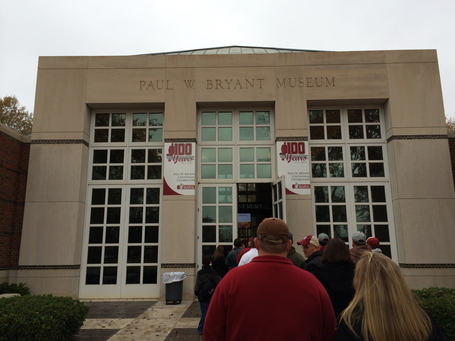 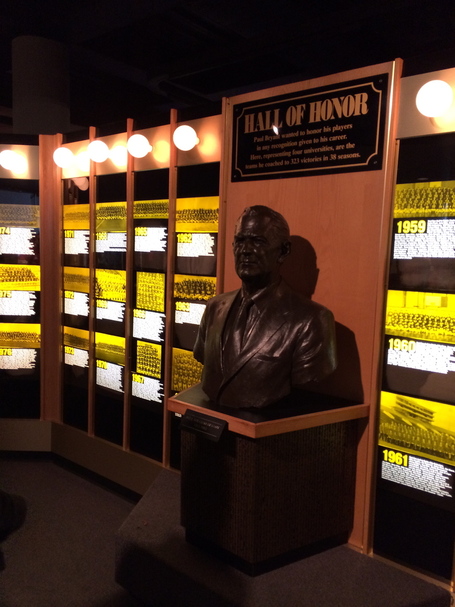 I didn't really know what to expect upon entering the museum. My best guess was that we'd see an old, wooden desk that The Bear sat in during grade school, sealed off in a glass casing--you know, stuff like that. While the displays did go into detail about Bryant's early life and ascent to the head coaching gig for the Crimson Tide, the majority of the space was dedicated to the overall achievements of the program, ranging from a 1927 Rose Bowl win over Stanford to Barrett Jones' Rimington trophy in 2012. 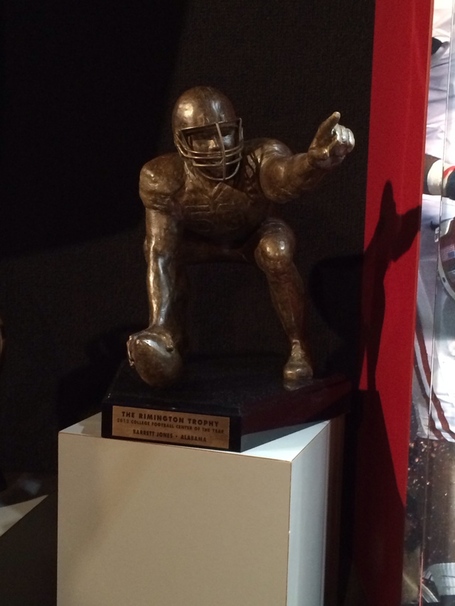 After leaving the Museum, we hustled back to Bryant-Denny to catch the Walk of Champions. We arrived 20 minutes early, but the crowd was already so big that I had to just hold my iPhone up and hope it caught something.

Having marked off everything on our checklist, we headed over to Galettes to watch what we could of the 11 a.m. games before heading into Bryant-Denny Stadium for the 1 p.m. kickoff.

The Yellow Hammer is Galettes' signature drink. I'm not exactly sure what's in it, but it'll cost you seven bones and is very pineapple-y. I would recommend adding the 151 topper for another three bucks to give it some extra punch.

Three Yellow Hammers later, we made our way over to Bryant-Denny, getting to our seats just in time to see the seniors introduced about 10-15 minutes before kickoff. 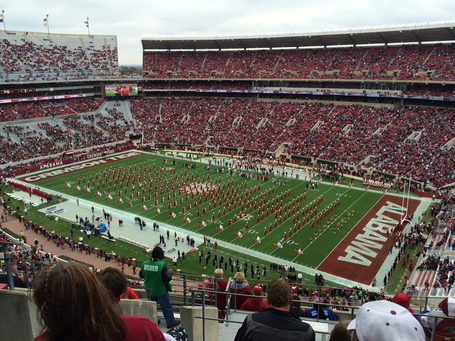 We estimated that the stadium was about 65-70 percent full, which is to be expected against an opponent like Chattanooga. But I still had this expectation that Alabama fans would be incredibly loud and intense throughout, even against an FCS opponent. That was not the case, as the weather and quality of competition resulted in a pretty tame environment inside the stadium.

We had not eaten anything since breakfast and assumed that we would be able to get Archibald's or Dreamland BBQ inside the stadium. After Alabama scored its first of seven touchdowns, we took to the concourse in an effort to acquire some pulled pork sandwiches, but -- after standing line for 40 minutes -- were told that the Dreamland BBQ vendor did not have any BBQ. Or ribs. Or anything that it purported to have, except for nachos and "stadium dogs."

We stayed into the third quarter, but figured we'd gotten everything we could out of the experience and decided to check out a few more bars on the strip, but not before snapping this sexy pic outside the stadium.

We headed back over to The Strip to check out a few more bars. Egan's was highly recommended but allowed smoking, so we quickly left. The Houndstooth seemed fun but was packed to the gills, and we really wanted to sit down after a long day of walking. We eventually settled on Steamers Oyster Bar & Seafood restaurant, where we had some perfectly decent shrimp and watched LSU maul Texas A&M.

Several beers later, we walked to a liquor store so that we would be well-prepared to celebrate Ole Miss toppling Missouri. One dicey cab ride later -- the driver was eating and on the phone and my seat did not have a belt -- we were back at the hotel, and I was asleep within 30 minutes.

I woke up around midnight to verify Missouri had won. (I assumed that my phone would have been blowing up if they had lost.) Then I went to sleep to prepare for our getaway day on Sunday.

The Feathered Warrior and I enjoyed our time in Tuscaloosa very much. The proximity of The Strip to Bryant-Denny and the surrounding tailgate venues was a particular highlight. Though I hope Alabama doesn't show up on our SEC schedule any time soon, I at least know that I'll enjoy my time in T-Town if we draw an away game against the Crimson Tide.

Thanks again to the folks at Hampton Inn for making all of this happen. Book hotel accommodations of your own with Hampton Inn right here. Be sure to also follow Hampton on Facebook, Twitter, and Instagram.