Is this an aberration or a signal that the South Carolina athletic department is on the verge of joining the Wild West that is weirdass college football Instagrams?

Share All sharing options for: Hey remember when Alshon Jeffery was translucent?

On Tuesday afternoon, the official Gamecock Football Twitter account (@GamecockFB) posted an Instagram of Alshon Jeffery (accompanied by the hashtag #TransformationTuesday) which strongly suggests that the Gamecocks' all-time leader in touchdown receptions was translucent at some point during the 2011 football season and then apparently regained the ability to absorb and reflect light during his rookie season with the Chicago Bears. 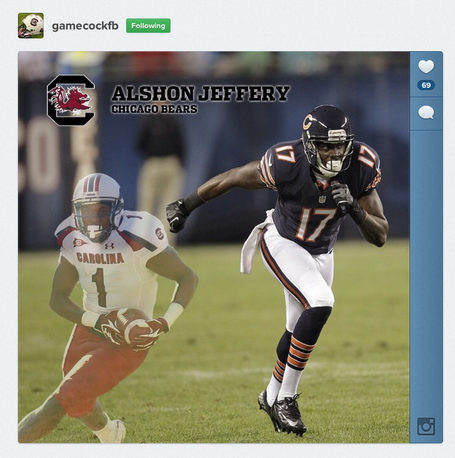 But before we get too far ahead of ourselves, let's consider an alternative to our Invisible Alshon Hypothesis: maybe the guy we saw running around in the #1 jersey was not Jeffery at all but, rather, an astral projection of the All-American wide receiver who caught 88 passes for 1517 yards and 9 touchdowns during the 2010 season - a specter of the six-foot-three wideout made separate from his physical body.

In either case, this would do a lot to explain why Stephen Garcia went from being an All-SEC quarterback to struggling to complete even the most simple dump-off passes over the course of an offseason. After all, it must be damn near impossible to connect on a seven yard slant route when your go-to receiver lacks corporeal form.

Was this "transformation" related to Jeffery's much-debated weight gain during the 2011 offseason? Was Jeffery another the victim of Dr. Jeff Guy's questionable medical practices? Or is it more likely attributed to the trace amounts of Chesney particles left behind after his 2008 performance at Williams-Brice?

We hate to wildly speculate, but any time a student athlete acquires the ability to let light pass straight through his body, these are the kinds of questions that need to be asked.