New star recruit, what to make of Spurrier's future, and some alternatives to the new season-ticket campaign slogan.

Greetings! This week's questions were few in quantity but hearty in value. As always, we welcome you to give your own opinions in the comments section.

Funny you ask, as 247 Sports just released its initial 2015 player rankings. They've slapped 5 FAT STARS on Blackshear. The 6'4", 235 lb. 15-year-old (!!!) currently projects as the state's top player in the 2015 cycle. Get excited! BUT NOT TOO EXCITED ARE YOU CRAZY? We're still 21 months removed from Blackshear's signing day and it would be foolish to assume his myriad suitors will be all that discouraged by such an early commitment. After all, five star recruits can be fickle creatures.

@RubrChickens asks, "Is it possible to grind all the time? I can only grind 2-3 hours at most before a rest. Of course, I'm well past prime grinding age."

An important issue. Steve Spurrier has made it clear that, while he does grind, it's not something he does in perpetuity. Most doctors suggest grinding at least four days a week, mixing in "getting after it" intervals until a desired level of turnt is reached. But is it possible to grind all the time? Is there a perpetual motion machine specifically for grinding? Yes, and its name is DJ Swearinger.

@RubrChickens also asks, "Buck fired off a tremendous blog post today. What's the over/under on the number of years Spurrier has left at USC."

First of all, just where do you guys get off plugging your wares on our turf? The nerve of some bloggers! I kid, of course. We cheerfully recommend the Rubber Chickens blog for their piping Hot Takes™ about Gamecock sports, denture adhesive, their lawns and the the young people who should stay off them. As for the question, what with Spurrier already getting nods from recruits who could be playing for us in 2019, it leads one to believe he's not primed to ride off into the sunset (presumably in a customized golf cart.) That said, he's playing with fat stacks of house cash right now—both figuratively and literally*—so he surely won't stick around any longer than he wants. The way I see it, one of a few things would need to happen for Steve to hang up the visor:

Anyone argue with number one? I can't imagine his "I don't grind all the time" mentality would allow him to coach despite a health issue. Number two is more of a hunch than anything, but I doubt Steve's got much interest in helming another rebuild. This is contingent on the fact that I don't think we could see a drastic falloff for another few years based on what's in the cupboard. So, basically, if Connor Mitch is a bust, Spurrier calls it a career. I also can see no valid counterargument to number three. There's too much at stake! Finally, I'll put the arbitrary age ceiling at 75, which would be 2020. Leave your thoughts in the comments!
*Figuratively.
@jgunnels27 asks, "Describe your ideal next head football coach for USC."
Nice followup! Since it is unlikely Spurrier would be fired outright, we could see more of a baton-passing situation. This would be ideal—just take a look at the baseball team. Legendary coach steps down, celebrated assistant steps in. I'm all about a similar scenario playing out for South Carolina's football squad, where Shawn Elliott or Whammy takes the reins when SOS bows out. Current players are comfortable, recruits won't get as rattled, and a benevolent regime is carried on.
Connor asks, "It seems like 'Top 10 Program' has replaced last year's season ticket campaign slogan of 'Experience It For The First Time...Again'. How do we feel about this? At least 'Experience It For The First Time...Again' was a complete thought, whereas 'Top 10 Program' seems like something Steve Spurrier murmurs in his sleep while dreaming about holidng court at a Junior Day-type event. I'll hang up and listen."
Agreed. Despite its impressive implications, "Top 10 Program" sounds too vanilla, as if it should be typewritten in Courier New font or something. Can't we find a satisfactory compromise between last year's paradoxically clumsy slogan this new dullness?
Yes, we can. Here are a few suggestions: 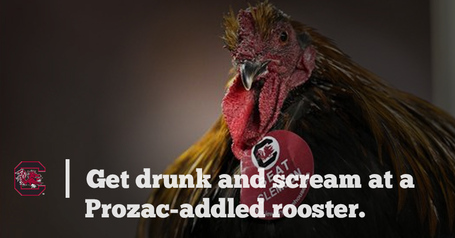 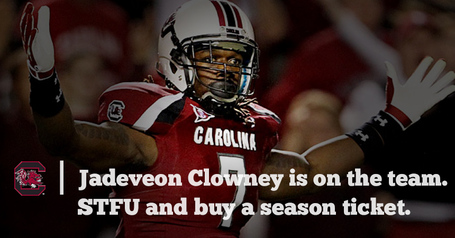 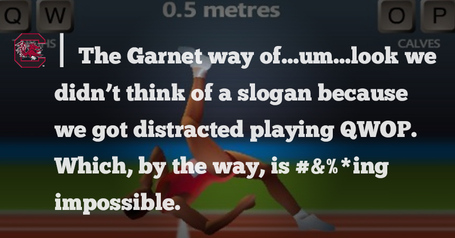 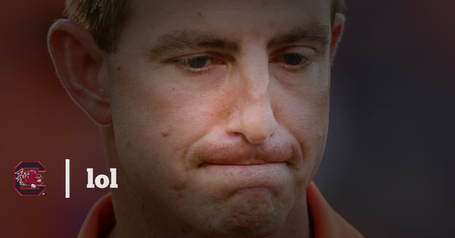 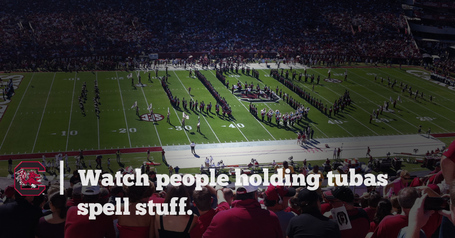 And finally, my vote goes to: 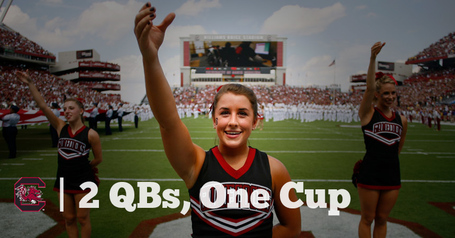 Thank for those who submitted! Shoot your questions for next week's GABAbag to gabamailbag@gmail.com or @GABAttack.