Let's look back on his introductory press conference from Nov. 23, 2004.

0:36 Rick Henry does not age. Also, his mustache is just wide enough to avoid categorization as one of the Charlie Chaplin/Adolf Hitler variety. 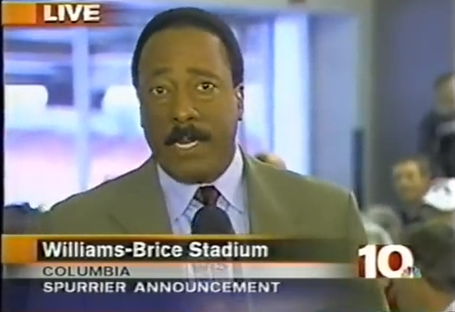 1:05 Ah, listen to that applause and whistling as Steve Spurrier enters the room. The credentialed media, y'all!

"I served as the president of Alabama for six years ... and I never had the experience of having three press conferences devoted exclusively to football within 24 hours, but that's our situation today. And I'm very pleased to report that we're ending on such a positive and upbeat note."

Oh yeaaaaah. As time has worn on, I'd forgotten that the brawl in Death Valley, the subsequent announcement that neither team would be participating in bowls, Lou Holtz's retirement, and Steve Spurrier's hiring happened in such rapid succession. But that was indeed the case.

The Clemson game was on Nov. 20. Shortly thereafter it was announced that neither team would be participating in bowls and that Lou Holtz would be retiring. (Rumors had begun to trickle out that Holtz was stepping down and Spurrier was taking over, but nothing was official.) Then on Nov. 23, just four days after the final game of the season, Steve Spurrier was announced as the new head coach. 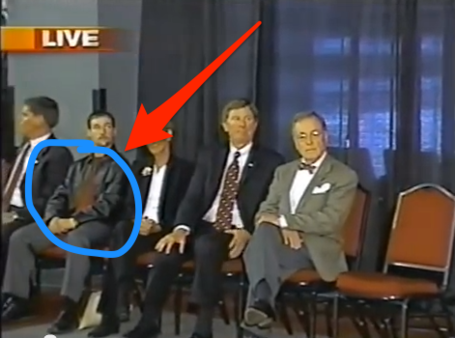 7:21 Spurrier fidgeting in his chair as he's waiting to be introduced is maybe my favorite thing about this entire video.

"I especially want to thank Coach Holtz. Lou Holtz has not only been a good friend of mine but he's been the type of man that, college football -- we all need him. We need more of his kind. ... And for Coach Holtz to recommend and endorse me to follow him here was certainly something he didn't have to do but he felt it was the right thing to do, and I certainly appreciate that."

You know that episode of How I Met Your Mother in which Barney sets forth a theory in which your opinion of Ewoks determines whether you are too old to date? I have a similar theory regarding Gamecock fans' appreciation of Lou Holtz.

My freshman year at South Carolina was 2004. Several of my friends from college are out-of-staters who didn't really start paying attention to the Gamecocks until they were on campus. As such, their earliest recollections of South Carolina football maybe include 2003. For people who became Gamecock fans during the 2002 season or later, it makes sense that they would have mostly negative feelings toward Lou Holtz. Three seasons without a bowl, plus whatever it is that he's been doing on College Football Final for the past decade will have that effect on a person.

But anyone who was around for 2001 or earlier ought to hold him in high regard, especially if they were around for any part of the 1990s. Spurrier's remarks here really drove that division home for me. I wish more of my peers had the fond memories of Holtz's time at Carolina that I do.

9:27 First you media people as a Gamecock

During the last couple of weeks I tried to stay away from you media people as best I could, but unfortunately I guess it may have distracted the team.

11:06 The press conference features surprisingly little in the way of Alright now, we're going to go out there and try to win some ball games, but Spurrier did manage to hit that important point in the following passage:

To tell you the truth, I'd like to borrow a phrase from the Boston Red Sox. Why not us? Why not the University of South Carolina Gamecocks?

Hey, remember when the Boston Red Sox represented the underdog?

Why can't we get to the top of the SEC? And, certainly, that's going to be my vision, my dream, our ultimate goal --- is that we can finish atop in the SEC, that we can some day win the game in the Georgia Dome ... I just want to pledge to out there to anyone that loves Carolina football that you're going to get my best shot. I'm ready to coach hopefully a lot like I did in the college ranks. I have no excuses for the two years in the NFL that weren't very good. I take all of the blame and all of the responsibility that we did not have winning seasons. And, hopefully, and I plan and I'm committed to the way I did in college. That means I'll be calling the plays, coaching the quarterbacks, running the offense, and being heavily involved with the defense in the special teams. I'll try to be involved with every player on the team the best I can, but mainly as far as running the offense. So that's our plan right now. I truly believe that winning the SEC is an achievable goal for the University of South Carolina. I really do. And we're going to try to do it every year -- every time we have a team that's capable. I know that's easy to say. I know it's not going to be easy. I know we've got some of the strongest teams in the nation in our division. Georgia, Tennessee, and Florida are obviously very good teams that we need to start beating soon.

South Carolina beat both Tennessee and Florida in Spurrier's first year. Would you consider that soon?

13:48 THUNDEROUS APPLAUSE FROM THE CREDENTIALED MEDIA

14:16 People were truly confused about why Steve Spurrier would want to come to South Carolina:

Coach McGee got to me at the right time and our conversations and everything added up, to me, perfectly for the type of place I want to coach. This is where I really believe is the best place for me to coach. Fortunately, timing in the coaching profession is everything, as we all know. If this hadn't opened up, I may not have coached this year. I was not looking to go coach just somewhere around the country. This was just, I think, an ideal spot. SEC, South Carolina, Eastern Division. It's just a wonderful opportunity for me and my family. And hopefully it will be for South Carolina as well.

15:11 Glenn Snyder introduces himself to Steve Spurrier. Ever since, the head ball coach has addressed him by his full legal name, Is That Right, Glenn?

15:46 First sumpin' likaat as a Gamecock

15:55 The first awkward Florida question of Steve Spurrier's South Carolina career serves as a reminder of just how tense the whole situation was when the wounds were still fresh. The word was that Florida athletics director Jeremy Foley had asked Spurrier to submit a resume, a notion that rankled the man who brought the Gators six conference championships and a national title.

Spurrier withdrew from the coaching search at Florida, which earlier this month fired Ron Zook, who succeeded Spurrier when he left to coach the Redskins in December 2001. Spurrier was contacted by Foley about returning to coach his alma mater, but Spurrier was unwilling to go through a long interview process that Florida President Bernard Machen wanted. When Florida officials asked for Spurrier's résumé, he essentially told Florida officials "to go look in the school's trophy case," a source close to Spurrier said.

A few things I had forgotten about:

23:30 Clemson fans apparently chanted We want Spurrier, we want Spurrier at some point during the Tigers' comfortable 29-7 victory a few days prior. I wonder how they feel about that now.

Another thing that I had forgotten: that the deal was finalized before the Clemson game and that word had already gotten out ( via GITDAWERDOUT) that Spurrier was going to succeed Holtz.

I was talking with Chris, our associate AD about that earlier, and I told him I wasn't really going to mention a whole bunch bunch of teams we need to beat -- and obviously they're one of them, along with Tennessee and Georgia and the others down the road. I've just found sometimes that you don't play very well when you circle a team up.

25:30 This is the first instance of Spurrier openly mocking a reporter's question. It's definitely out there, but I kind of love the question:

Can you describe your relationship with your wife and family? And we've all seen your intensity on the field. Do you have what we call a softer side? 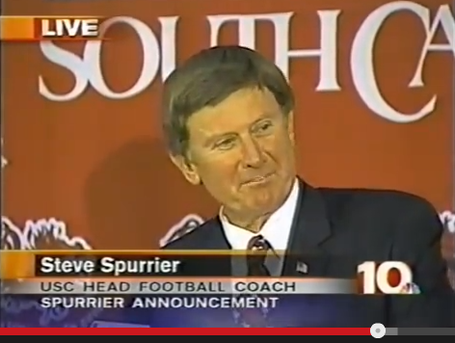 "Last couple of years they told me I wasn't mean enough."

28:44 Regarding his first meeting with the players:

They were very attentive and they were all on time. Coach Holtz had told me that this was a well-disciplined team and that what happened Saturday was out of character for this group of players, and I believe him. Every player was in their places and on time, and I really admired the way they behaved and the way they listened.

[approximately half of the team gets dismissed during the offseason]

29:27 ANOTHER APPLAUSE FROM THE CREDENTIALED MEDIA

Wow, that was fun. What other classic films would you like for us to review?