Well, that was certainly an interesting week 1. Thank goodness SC has a dedicated special teams coach. More on that below. 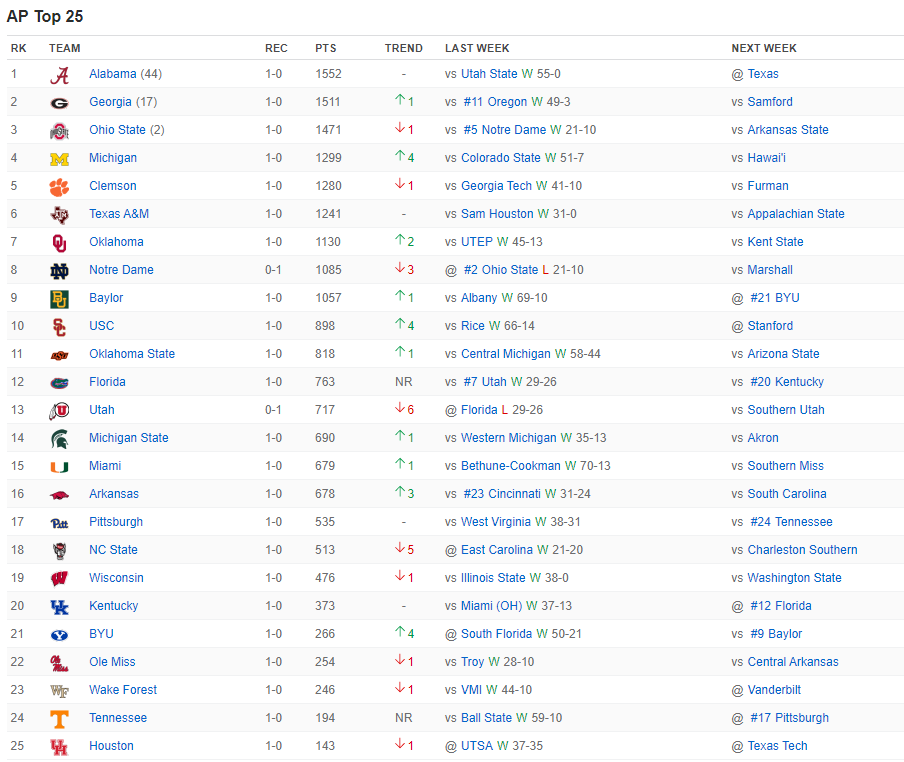 I’m not trying to give Saban anything to rile his team up with, but I think Georgia deserves to be #1. It was a ho hum 55-0 beat down of Utah State. I think they said that Bryce Young had as much rushing yards in that game as he did last season? I hope the back up QB is ready to go in Tuscaloosa.

Georgia did move up one spot after destroying Oregon. I mean, it wasn’t like they had anything new to plan for in that game. They already played Bo Nix 3 times, the head coach was their defensive coordinator last year, and the OC was with Malzahn at Auburn Nix’s first year. It will be interesting to see if anyone has enough to make Georgia sweat until the SEC Championship.

Ohio switched places with Georgia. What do they say? Good teams win, great teams cover. Well, Ohio State isn’t great yet. They have time to work it out though. The defense looked better, and that might be all they need to get to the CFB Playoffs this year.

Michigan moved up 4 spots after dismantling Colorado State. Again, not sure what that says about Michigan. Did people just want 2 B1G teams right behind 2 SEC teams? It sounds like there is still a QB competition in Ann Arbor. Another QB will be starting this week when they play cupcake #2. Remember Michigan, Vanderbilt beat Hawaii by 53 in Hawaii. I would think voters will have to drop you if you can’t at least match that.

Everyone’s favorite team to hate drops 1 spot to number 5. As much crap as Clemson fans were giving SC after the Georgia State game, turn about is fair play. GT held them scoreless through the first quarter, and they were in the game through the middle of the 3rd quarter. I just feel like this team is a remake of the year that Lawrence took over from Bryant at QB. Let’s see what Dabo does in the next few weeks.

Texas A&M’s toughest test was against the weather last Saturday. Quarterback play was a little shaky according to some. It will be interesting to see the game against App State. I’m not saying the Mountaineers will roll into College Station and walk out with a win… but let’s see how much they score. Remember Aggies you play in the SEC, please don’t get into a shootout like UNC.

Oklahoma moves up a couple of spots. Brent Venables had a successful opening game. They have another tune up against Kent State this week. Nothing like easing into the tough Big XII season. Make sure you watch the Alabama game to see what needs to be done to beat Texas.

Notre Dame falls 3 spots after a tough loss in the Horseshoe. Didn’t see the game since it was on at the same time as the SC game. But the highlights really weren’t that impressive for either team. Marshall should provide a bounce back opportunity this weekend. At least the hardest game on your schedule is already out of the way.

Baylor is next in the poll. You did what you were supposed to against Albany. BYU will provide a tougher test this weekend. You will learn a lot about what you are as a team this week. Should be a good rehearsal for Texas and Oklahoma later this year.

Southern Cal moves up 4 spots with a win over Rice. They are the only team that has any shot at getting into the CFB playoffs. With Oregon and Utah losing to SEC teams this weekend, the Pac 12 is not getting in unless Southern Cal goes undefeated. Not sure Riley has it in him.

Oklahoma State comes in at number 11. Another team with a little step up in competition this week. Spencer Saunders would make a lot of teams better. Gundy is lucky to have him back this year.

Surprise team of the week jumps into the rankings at number 12. Florida surprised a lot of people including me with their win over Utah. The only thing more surprising is that voters moved them up ahead of Utah in the rankings. This is reason # 568231 that voters have no idea what they are doing before games are played. Good luck with Kentucky this weekend. Just like Georgia used to be, they will be without a few players because of disciplinary actions. Might be the perfect time to catch them.

Utah fell 6 spots this week. The second biggest plunge behind Oregon’s. Not something the Pac 12 will be proud of this week. Well, there is always next year. That’s a little harsh as they have everything to play for still on the table, except the CFB Playoffs.

Michigan State moves up one spot after beat a directional school. They are checking in as the 3rd B1G school in the poll. Being 10 spots behind Michigan must sting a little though. I see they are taking it easy again this week against Akron. It must be nice having all these MAC teams willing to come to your house. They have a manageable schedule up to the Ohio State game on October 8th. That game will be hyped up if they are both undefeated.

The real pride of the ACC moved up one spot to number 15. The U is back. Well, I guess we will if that is true in a couple of weeks. That trip to College Station will be telling. Does anyone have a shot to keep Clemson off the ACC throne again this year? There are many people that think that Miami has a shot.

Arkansas moves up 3 spots after beating last years surprise entry to the CFB Playoffs, Cincinnati. That was a good win for Sam Pittman’s crew. I hope SC has fixed some of their o-line issues before the early kickoff on Saturday. I’m not giving SC a good chance of winning that game.

The winner of the Backyard Brawl holds steady this week. I mean, you did need a gift-wrapped pick 6 and some bad JT Daniel to win the game. Keep Tennessee under 40 points this week and I might be impressed. I mean you have to protect home field, no matter what it is called this year.

Another ACC team that was lucky to escape Greenville, NC with a win. Another team that wished they had a good field goal kicker, ECU should have won that game. Many people thought they had a chance against Clemson this year, but I’m not so sure. They will have a chance to work out any kinks this week against Charleston Southern. I hope they can get right.

Wisconsin is next in the poll. Just your every year decent B1G team. I mean at least you are not Iowa, right? The B1G is wide open on the West again this year, ripe for the taking. Lets see if Bucky can take advantage.

Kentucky was another team that struggle early in a game that was against a perceived inferior opponent. Their first round QB did throw for over 300 yards. He needed to after the team averaged 3.8 yards per carry (not counting Levis’ runs/sacks). Got a big opportunity to get a top 15 win this week against Florida. Although, that win will more than likely get worse as the year goes on.

BYU moves up 4 to number 21. A big showcase game against #9 Baylor is happening this weekend. Looking at BYU’s schedule they have some good games this year. The most interesting might be a trip to Lynchburg, VA to play Liberty. Instead of Mormon’s versus Mullets like last year’s game against USC Conway, it could be the Mighty Mormons versus Fighting Farwells. I’m sure some intrepid student will be making some money selling shirts this year. If SC’s bye week was that week, that might be a game to go to. It’s a two-hour drive from the house.

The self-proclaimed Portal King and Ole Miss is next in the poll. No one knows how Ole Miss will do this year including Kiffin. This week will more than likely be another shootout with Central Arkansas. It will only get harder for Ole Miss after this week. It stinks having to be in the half of the conference with Alabama, A&M, and LSU (when they are good). Not to mention a good Arkansas team and the Pirate down the road at Miss State. And I just realized all those games are in a row to end the year.

Wake Forest drops a spot after only beating VMI by 34 points. The biggest question will be when Sam Hartman will be back as the starting QB, look like this week. They have the tough test of heading to Nashville to play 2-0 Vanderbilt. Nothing like smart kids beating up other smart kids.

All the Tennessee fans that were mad that they were not in the preseason poll can relax now. You have made it in the AP Poll. It would be just like Tennessee to lose to Pitt this week and be right out the poll. Don’t embarrass the SEC like LSU did last week. The ACC can’t be thinking they are close to the level of competing week in, week out with the SEC.

Houston survives UTSA. Nothing to feel ashamed about. This week’s game against Texas Tech should be another fun one. I don’t see a lot of defense being played in that game. That means it will be about as fun as the Iowa/South Dakota game to watch. Two field goals and two safeties as the only scoring. Sending college football back 80 years.

I hope Beamer was being truthful when he said he’s rather play at 9:30 in the morning. As this week will be kicked off at 11 am Central. I hope the team doesn’t need a half to wake up.