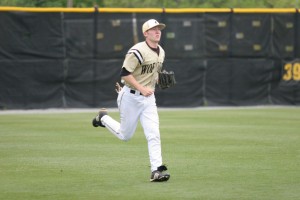 Baseball is not a sprint. It's a marathon, people. Remember that. (www.champs2.com)

OK, everyone, calm down. So we lost a series. And it happened to be an SEC series. And sure, it was our first SEC series loss of the year. And yes, we lost it to Kentucky - a team that has a losing record in the conference. This is concerning on multiple levels, but it's not the end of our season. For those of you that thought we were CWS bound, this weekend, no doubt, brought you back to earth. For those of you that figured we had to lose a series eventually, this weekend probably didn't change your expectations for the Gamecocks that much.

So what happened? Baseball happened. On Friday night Carolina survived another sub-par performance from starter Blake Cooper, winning 13-9. Cooper lasted 5.2 inning and surrendered 7 runs, only 3 of which were earned, though. The offense was helped by a banner night from freshman Christian Walker who went 4-6 with 4 RBI.

In game two Sam Dyson settled down after a first inning jam to pitch all 8 innings of a 2-1 loss. Dyson struck out 8 and allowed just 6 hits but also 4 bases on balls. The 'Cocks on the other hand mustered just 6 hits and 2 walks in the effort. When your 1 through 4 spots in the lineup combine on the night to go 2-14, you're not going to win many games. While its frustrating when the bats go cold, Gamecocks fans can take heart in the fact that Dyson appears to be in peak form heading down the home stretch of the regular season.

Sunday, on the other hand, was different story. After tacking on 3 runs in the top of the first inning, the USC bats fell silent for the rest of the game. The Gamecock pitching staff didn't perform any better, surrendering 8 hits and 5 walks en route to a 9-3 loss. Tanner trotted out 9 different pitchers in the game, the most disappointing being former freshman hero, Ethan Carter, who was charged with 3 runs while recording just 1 out. Tanner and Calvi appear to be taking the "by committee" approach to our Sunday starter problem. I can't say that I think it's a bad strategy given our current options. I mean, it's not like Mark Calvi is all of the sudden going to crap another Blake Cooper or Sam Dyson for the team's benefit, although I wouldn't be surprised if the thought had crossed his mind. I've already seen where some people are blaming the pitching staff for the dropped series, but I think that utilizes some flawed logic. Copper stumbled on Friday night, but we managed to win. Dyson went the distance on Saturday but couldn't get more than one stinking run of support. The Sunday rotation did give up 9 runs, but that was on just 8 hits. Normally one would expect the hit column to be greater than the run column. This deviation would seem to indicate a little of that baseball luck (or anti-luck in this case) coming into play. And let's not forget that 9 runs is not an insurmountable number, especially against pitcher who has a season ERA of 6.23.

What I think Carolina fans need to come to grips with is that this is a team defined by it's pitching, not by it's hitting. It's too late in the season to hope for a turn around from our lineup. As Steve Spurrier might say, it is what it is. If this team is going to win anything we're going have to: 1) get solid starts out of our Friday and Saturday night guys and 2) hope to God the hitting gets hot at the right time. This kind of offensive impotence is the result of having a .226 hitter (Bobby Haney) in one's lineup. Haney would make a great defensive replacement late in a game which we're winning, but he kills our rallies before they even get going. We need to get some guys in the lineup with higher averages more often. Evan Marzilli, currently hitting .357, comes to mind. The only problem here is that Marzilli doesn't play short stop. Like it or not, we're stuck with Haney for the remainder of the season, so y'all send some good joojoo his way.

The loss dropped us in the polls some, but not terribly much. USC is now ranked highest at 7th (Collegiate Baseball) and lowest at 13th (NCBWA). The new RPIs aren't out yet, but I expect that they'll be kind to us given that Kentucky was ranked 27th last week.

Losing two games to Kentucky hurt our chances of being SEC regular season champs, but it certainly didn't obliterate them. Our two series left on the schedule are with the division leaders for the East (Florida) and West (Arkansas). The road to the championship still goes through us, and I wouldn't want it any other way. We're still a game ahead of Arkansas, so we just need to take two from them this weekend to remain out front. The situation with Florida is a bit more dicey, however. Florida takes on UGA this weekend - a series I would be shocked (Shocked!) if they didn't sweep. That means USC must sweep Arkansas to keep ground with the gators. That's not going to happen. The most likely scenario is that we will enter our series with Florida a game behind them. We can either sweep Florida (unlikely) or take two of three (more likely) to earn the SEC regular season crown. In the event that we take two from the gators, we'll be tied for first. While I admit that I don't know how the tie breakers work, I have to think that our (hypothetical) series victory over the gators and better record within the division will tip the odds in our favor.

As for our post season aspirations, being a top eight national seed seems remote at this point. That could, and would, change if we won our last two series of the season. Hosting a regional is still probable unless we fall flat on our face from here on out. I don't get too caught up in all this national seeding stuff anyway. Sure, I would love to have to the opportunity to host a regional at Carolina Stadium, but the bottom line is you have to win the games on your schedule. Teams that host may have an easier past to the CWS, but every year host teams lose in the first round. The cream rises to the top.

This week the Gamecocks take on Wofford Tuesday before traveling to Arkansas for the most important series to date. Carolina leads the all-time series with Wofford 69-23-1