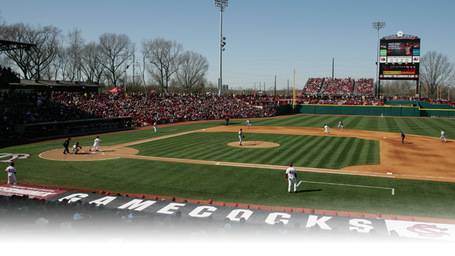 The Gamecocks leave the friendly confines of Carolina Stadium, where they are 23-4, and travel to Lexington to take on the University of Kentucky this weekend.

After dispatching Winthrop on Wednesday with extreme prejudice, South Carolina (35-9, 16-5 SEC) travels to Lexington for a weekend series with the Wildcats. Kentucky (24-20, 7-14 SEC) started off the season well but failed to win a series versus an SEC squad until its fourth weekend in SEC play (against Alabama). The Wildcats are fifth in the SEC East and tenth overall. They are only 15-8 at home and just 4-5 at home in the SEC. However, their RPI ranking is a respectable 27. That RPI might have a lot more to do with the quality of Kentucky's opponents than the Kentucky team, itself, though. They've already played series versus Ole Miss, Vanderbilt, Arkansas, and Florida - all top 25 teams.

This past weekend's offensive performance has helped USC move up in the SEC hitting statistics. Carolina is now batting .305 compared to Kentucky's .298 and an SEC average of .309. That's good enough for 6th. South Carolina also moved into 4th in the SEC in on base percentage (.404). Kentucky actually leads USC in the home run columns with 65 to Carolina's 64. Both are a distant second and third to Auburn's 81. Kentucky also leads Carolina in the hit-by-pitch category with 94(!) to USC's 52. Unfortunately, USC still leads the the SEC in SAC Bunts with 42 (ugh). On the other hand, Kentucky also leads the SEC in an embarrassing stat of it own; that being stolen base attempts (114).

As for pitching, Carolina has a clear edge. South Carolina is second in the SEC in ERA (3.69) compared with Kentucky's (5.57). The Gamecocks still lead the league in opposing batting average (.231) despite last weekend's hit-fest. Kentucky is near the bottom at .289. Carolina also has struck out 100 more batters than the Wildcats (408 to 308).

All of that is to say that Carolina should expect a productive weekend against the 'Cats. Even though USC has to travel all the way to Lexington, the Wildcats haven't been exactly dominating on their home field this year. What's more, Kentucky resides just above Mississippi State and Georgia in the standings. This weekend is the only real candidate for a sweep left on the schedule, and if Carolina want any breathing room in the SEC as it heads down the home stretch, its going to need to get it. The 'Cats have only been swept once this season - by Vanderbilt - so it's not going to be easy. Given all this, I predict USC takes 2 of 3 from 'Cats. USC leads the all-time series 37-27.

On a side note, Team Speed Kills linked to a pretty interesting piece from War Blog Eagle where he calculates the Pythagorean wins (expected wins) for the SEC baseball teams. The formula puts South Carolina at the top and Georgia at the bottom. No surprises there. However, it is surprising that Auburn ranks #2. In fact, Auburn is #2 despite having an unlucky -1.873 fewer wins than expected.

This kind of formula is pretty interesting, but as far as having future predictive value, I'm not sure how useful the input data is. The expected wins formula can be used in the MLB to put together a team that, according to the stats, can compete for a championship. In the case of the MLB, team execs have years of data to project how a player will perform. What War Blog Eagle has done here is enter just the data from this season. Naturally, we would expect the predicted win to nearly match the actual wins. And that's pretty much what we get. Thoughts?