Hello, again, baseball fans. After an unsuccessful trip to Hoover, the Gamecocks are back in action this weekend for the NCAA regional. I don't want to spend too much time on what happened in the SEC tournament, but here are a few important highlights from from last weekend (does Thursday even count as the weekend?)

*The 20-run game versus Alabama was excluded

The winner of the Columbia regional will be matched with the winner of the Myrtle Beach regional where Coastal Carolina is hosting College of Charleston, NC State, and Stony Brook. USC has already beaten CofC this season, and NC State and Stony Brook don't appear to be much of a threat. If USC were to win its regional, it would probably face Coastal in the Super Regional in all likelihood. Coastal is a #4 national seed, but I question whether they are truly that good. I'll have more on that later, regardless of how the regional rounds turn out. For now, let's examine our opponent for this weekend.

The Hokies placed fourth in the ACC Coastal division this year. They were swept by both Clemson and North Carolina, but managed to eek out a series win against #8 national seed Georgia Tech. They also took a series from perennial baseball power Miami. The Hokies are sporting a team average of .322 and a team ERA of 4.67. Those total adjust considerably when OOC games are take out. The team average drops to .290 while the team ERA balloons to 5.46. Starter Justin Wright leads the team in wins (8) and healthy 3.59 ERA (3.69 in league play). Reliever Ben Rowen accounts for all of the team's saves (5) and has a 3.02 ERA (5.13 league play). Their best hitter may be Austin a Wates (fresh off National Player of the Week honors), a junior from Richmond, VA. He's hitting .373 on the season with 8 HRs and 51 RBIs. Not far behind is Steve Domecus, a red-shirt senior who plays both outfield and catcher. Domecus has 12 HRs 58 RBIs, and a .646 slugging percentage. He's also hitting .371.

Va. Tech is your typical #2 seed in a regional. They're good but not great. Case in point: they broke the school record for strike outs thrown this season (504), but also broke the record for wild pitches in the process (79). They have managed to finish above .500 in what could be the toughest conference in the nation for collegiate baseball, so that's something. They are also ranked #34 in the NCAA's RPI. The Hokies are certainly capable of beating us of their best days, but I don't think they could beat us on ours.

Before Virginia Tech plays us, they first must get past #3 seed The Citadel. Gamecock fans will remember that we have already played the shakoed Bulldogs twice this season -- coming out victorious each time. The Citadel is a good team, though. They actually rank higher than Virginia Tech in the NCAA's RPI, coming in a #32. They currently own the second longest winning streak in the nation (12) and are fresh off winning the Southern Conference Tournament. They won the regular season title a week before. They boast a team average of .299 and a team ERA of 4.55. Starter Asher Wojciechowski leads the team in wins (12) and has a 3.25 ERA. Reports are that The Citadel may hold their ace for a possible Saturday match up with South Carolina (H/T: Gobbler Country). I don't like that scenario one bit, but if that is the case let us hope that Va. Tech dispatches the Bulldogs with extreme prejudice. 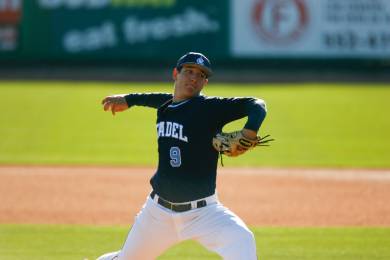 Bucknell snuck into the NCAA post season with an overall losing record by winning the Patriot League tournament for an automatic bid. They swept a double-header in dramatic fashion versus Holy Cross to claim their fifth League title. The Bison boast a team average of .313 but a rocket-high ERA of 6.10. Their best pitcher appears to be junior Dylan Seeley, who owns a 4.03 ERA and a 5-3 record.

By all accounts Bucknell should probably not have made the post-season. Their NCAA RPI is 212. However, they're not to be taken lightly. In 2008 Bucknell knocked off nationally seeded Florida State in the opening game of their regional. I don't think the we're dealing the same caliber of team this year, but the potential for upset is still there - especially if Carolina's bats stay as cold as they have been the past few weeks.

On paper USC should come out of this regional without much trouble. As we all know, though, Carolina doesn't always stick to the script. I imagine that Tanner will throw out either Jay Brown or Nolan Belcher for the Friday game since Bucknell does not pose much of a threat. I wouldn't be surprised to see Sam Dyson in the second game instead of Blake Cooper since he hasn't gotten any work since the Florida series. As for the offense, I can't offer any insights there. Let's all just hope they show up for this weekend. After the elimination game against Auburn, Ray Tanner said he would run the team through some pressure hitting drills this week. Hard to say if that kind of exercise will pay off at this but in the year, but there is not a whole lot else he can do.When the post season comes around, you are what you are.

Good luck to our Gamecocks this weekend. Despite recent performances, I think this team has an excellent chance of making to the College World Series this year. I'll be around this weekend to comment on anything noteworthy. Join me, won't you?