Is Bobby Haney the Key to the Gamecocks' CWS Chances?

Share All sharing options for: Is Bobby Haney the Key to the Gamecocks' CWS Chances?

We're all familiar with Bobby Haney by now. Born to Jeff and Mayanne Haney of Smithtown, NY, Bobby was drafted by the Philadelphia Phillies in the 38th round of the 2006 MLB draft. He spurned the Phillies in favor of Manatee Community College where he was selected to the FCCAA second team all-conference team as a freshman. As a sophomore he hit .383 with 23 doubles and 13 HRs before transferring to South Carolina. Haney has had an up and down career wearing the Garnet and Black, but  if the Gamecocks want to make any noise in the College World Series, they'll need  Haney to continue his upward-trending batting average. And let's not forget that the kid looks like he walked right out of The Sandlot and into a Gamecock uniform.

In 2009 Haney began his playing career as a Gamecock. He struggled early in the season in the batter's box, but his fielding prowess was evident throughout the year. He ended 2009 on hot streak that included a 9-for-18 performance in the NCAA regional. Haney was hot when we needed him the most: namely,  the postseason. He finished 2009 batting .291 with 4 HRs, 14 2B, and 30 RBIs. Not too shabby. Those stats helped garner him second team All-SEC honors at shortstop as well as being named to the SEC All-Defensive team.

2010 had an eerily familiar start to it for Haney. After beginning the season mired in a hitting slump, Haney has come on strong as of late. It seems like it was only yesterday that he was flirting with the Mendoza line, but since the game versus Charleston Southern on May 12, Bobby Haney has hit .314 with 9 RBIs. That's raised his season average to .259. Haney's reputation as an excellent fielder is well-deserved. As of this writing he ranks 20th in the SEC in fielding percentage at .971 - right behind fellow Gamecocks Scott Wingo (#15, .974) and Christian Walker (#13, .975). 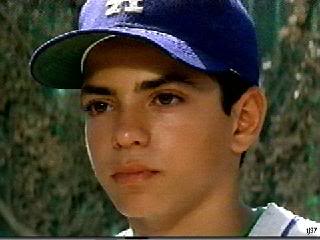 Bobby "The Jet" Haney at the tender age of 13. (via img.photobucket.com)

Recently, Haney has been pulling his own without a doubt. That .314 average over the past few weeks comes against some of the best pitching the Gamecocks have seen all year. He may have been only 1-4 against The Citadel's Asher Wojciechowski, but that one kick-started a 5-run 7th inning that blew the game wide open.

The reality, though, is that Bobby hasn't been an integral part in USC's offense this year. The times when Haney has shined the rest of the lineup has come up woefully short (the Florida series and SEC tournament), and when he has struggled the team has managed to soldier on without him (the first half of the season). That M.O. won't fly if we make it to the 2010 CWS. Good teams usually wind up where they should, but only teams that are clicking during championship time go on to win titles. Here's to hoping Bobby Haney and the rest of the Gamecocks finish the season strong.