I have to get this gone today since the CFB Playoff rankings come out tomorrow. This will be a little easier with the Gamecock victory, Clemson loss, and the playoff picture getting slightly clearer. On to the AP Poll. 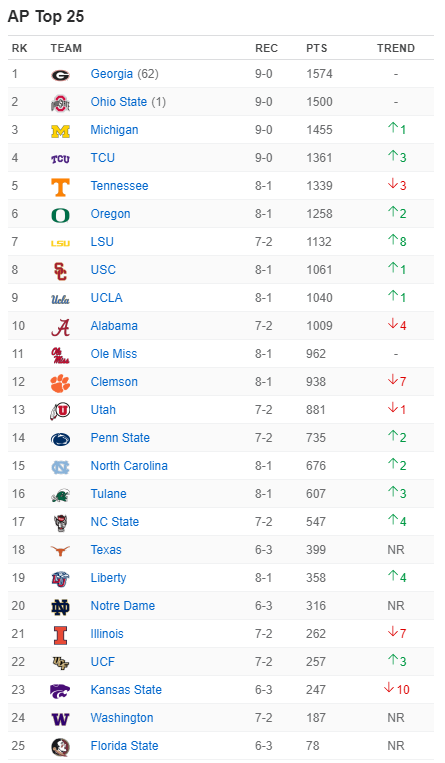 Georgia has a stranglehold on the top spot. That defensive gem on Saturday seems to have cured most (all but 1) voters’ belief that there was anyone else that deserved the top spot. The schedule is not difficult after this week, until the SEC Championship game that is. Mississippi State, Kentucky, and Georgia Tech should be nothing but small bumps in the road. It’s hard to believe you could argue South Carolina is their 3rd best win this year.

Ohio State survives their "windy" game against Northwestern. Not sure a 21-7 game is all that impressive over a team that has not won since the first week of the season. I guess there really isn’t anyone else that has played multiple ranked opponents and is undefeated… wait, the guys in the truck have just told me TCU fits that description. Oh well, mid-west bias is the culprit.

Michigan finally decided to wake up against Rutgers Saturday. That must have been some half time speech coach Khaki gave. Again, if there was only another undefeated team with multiple wins against ranked opponents. I guess TCU was not a sexy pick to start the year, so they can’t move above anyone else in the minds of these voters.

Finally, TCU is at number four. This might be 2 spots too low for them honestly. Have they completely destroyed everyone they played, no. Have they at least played multiple ranked teams, yes. They get another one this Saturday when they have to go to Austin to play Texas. It will be interesting to see how the rest of the season goes for the Horned Frogs. They just need to keep winning, and have other people lose

Tennessee falls down to number 5 after their loss to Georgia. I’m just glad South Carolina is not their next game. Missouri gets to be the chump that gets sent out to prop a guy back up with. I’m not sure that SC has any shot in a couple of weeks, but at least they will get some of their frustrations out against Mizzu.

Oregon has somehow found themselves back up at number 6. I guess the voters really want to have the entire nation represented in the CFB Playoff. They have 2 more ranked games as it stands now. They don’t need to be like Alabama and overlook anyone. I still don’t think they are a top 10 team. But, I’m just some dumb fan who doesn’t know anything.

LSU makes a leap after beating Alabama at night in Death Valley. Biggest move up the poll out of the teams that were ranked last week. The Bayou Bengals hold their destiny in their hands to get to the SCE Championship game. That week 1 loss to Florida State looks stranger and stranger every week. It looks like the SEC West might have the 3rd best team in the conference right now. That is a down year for them. I’m glad Kelly is working out for LSU. At least minus his fake southern accent.

Bottom Cal is next on the poll. Looking very unimpressive with a high profile QB and coach still gets you places these days. They get a tune up against the worst P5 school this year in Colorado before playing UCLA. Bottom Cal is already 0-1 against ranked teams, and they could make it 0-2. The problem is that voters will still have them in the top 15 for some reason.

Speaking of UCLA, they are right behind Bottom Cal like they usually are in these rankings, or any rankings. Well, they might be above them in some kind of academic rankings. And, I think they didn’t have a pay for play (fake scholarship) thing like Bottom Cal. Still not a whole lot to see here either. Though they are a respectable 2-1 against ranked teams, so there is that too. They also beat Utah which Bottom Cal did not. So, again thanks for nothing voters. They should be ranked above Bottom Cal based on those 2 things alone.

Did anyone not named Tennessee have a worse week than Alabama. Alabama has lost 2 games on the last play. Having like 25 combines penalties in those 2 games doesn’t help. Both of them were on the road also. I should also point out the Young has been scrambling all year due to his line being sub-par for Alabama… oh, Eric Wolford is the offensive line coach now… interesting. I guess we all know who will be looking for another job after the season.

One spot behind them is their next opponent in Ole Miss. You know Kiffin has been looking at the Tennessee and LSU games to come up with something to capitalize on. I’m thinking Alabama stacks the line of scrimmage to force Ole Miss to throw the ball to win the game. It will be a fun game to watch to see how they combat what the other team wants to do. At least Juice Kiffin can go to the home game.

Clemson "only" falls 7 spots after getting manhandled by Notre Dame. I’m not sure how they don’t tumble out of the top 15 after that stinker. It’s not like they lost to a ranked team. Well, they are ranked this week. But everyone just remember that Marshall beat Notre Dame at Notre Dame this year. So, that makes Clemson worse than Marshall. I love it. Clemson has 1 more win against a current top 25 team then South Carolina right now.

Wow, Utah wins a game by 4 scores and drops a spot in the poll. Talk about playing the no respect card this week. This is why Clemson has no business in the top 15. Other people are getting pushed down or not being able to move up because people think Clemson is actually good this year. Not proven they are good, just people perceive them to be good. Sorry, Utah didn’t mean to go on that rant. I fell like you guys got the shaft because of the Clemson bias that is all.

Speaking of B1G teams that have not beaten anyone worth anything, Penn State is next in the rankings. They are 0-2 against ranked teams and they do not have any left on the schedule. Does anyone know how good a team is if they go 10-2 without beating a ranked team? At least Kentucky was ranked when SC beat them.

UNC is taking advantage of a good freshman QB and a bad ACC conference to move up to number 15. The voters must have forgotten that Notre Dame beat UNC in Chapel Hill by 2 scores. Yet Notre Dame is 5 spots behind the Tarheels. Again, no logic with head-to-head matchups this late in the season when it comes to these polls. The Wake game will be a 60-55 affair. I wonder if Mack dumps Chizik after this year.

Tulane is the Group of 5 darling this year. A weird loss to Southern Miss is their only blemish so far. They are trying their hardest to get into the top 14. It would be interesting to see them in a New Year’s Six bowl game. They still have two tough games against UCF and Cincinnati left on the schedule. If they can win out, they have a decent resume. More deserving than some schools.

NC State is desperately propping up Clemson’s resume by staying in the top 20. Louisville and UNC are both away games to end the year. Those might be the difference between Clemson making a comeback into the CFB Playoff top 6. So, for everyone’s sake, lose those games. You already lost to Clemson, get them back by losing games and falling out of the top 25. You are bowl eligible already, no need to win games because you are not going to a good bowl anyway.

Texas’s loss to Alabama just got worse. They are the first 3 loss team in the AP Poll at number 18. You tried to give away the game in the 2nd half against Kansas State, but you got Martinez to do Martinez things on the last drive. Good for you. You might even be able to stay in the rankings when you lose to TCU this week. That loss to Oklahoma State really must sting right about now.

Liberty is moving up the rankings after beating Arkansas. Wow, SC couldn’t do anything to stop Arkansas, but Liberty held them to 19 points. Hugh Freeze just signed an extension to stay at Liberty (he will not). Everything is looking rosy in Lynchburg.

Notre Dame finally did something right. They beat Clemson and it was not even close. That was my second favorite game, and I didn’t see any of it. I just watched the score keep coming up at the Vandy game. How did this team lose to Marshall and Stanford? Can you guys ruin Bottom Cal’s season at the end of the year too? That would be swell.

Well Illinois, did you guys overlook Michigan State to get ready for Purdue? Or, did you guys start game planning for the Michigan game already? I know Bret B was not a happy camper after the game. He probably ate 3 pizzas just to feel better. You still have a one game lead in the B1G West, don’t blow it.

UCF got out of Memphis with a win to move up to number 22. A big game at Tulane is on the schedule this week. Win this game and there is a 3-way tie at the top of the AAC. Plus, USF just fired their coach so you might be able to steal some recruits, if any of them are good enough to play for you. Don’t let Malzahn get too cray this week.

Kansas State plummets down the poll after their loss to Texas. They find themselves barely in the poll at number 23. 3 interesting games remain on the schedule… @Baylor, @West Virginian, and home against Kansas. All those games are winnable and losable. Those will determine if you get a warm bowl game or not.

Washington creeps back into the top 25 this week. They might just head right back out the door when they lose to Oregon this week. I do like Michael Penix, Jr. at QB. Not too many players can win at Indiana and Washington. 9-3 looks pretty good right about now. I think that will be a welcome record for the Husky fans.

Well, Clemson needed another win against a ranked team since Wake Forest lost, so the Seminoles are ranked 25th this week. I tell you what, has there been a worse move than leaving Oregon and going to Miami? I hope Cristobal has some recruits coming in, because he needs all the help he can get. Who knows when the last time Florida State beat Miami by 40 was? At least you don’t have any really hard games left Florida State. When was the last time you beat Miami and Florida is the same year?

Who deserves to be in the top 25 that wasn’t? Which school is the biggest fraud right now in the poll?