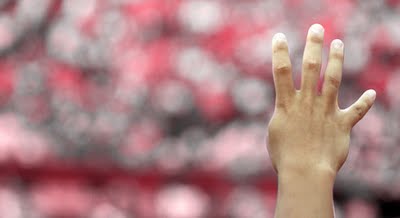 The South Carolina Gamecocks are 6-3 (4-3) through the first three quarters of the season.  There have been both extreme highs and humbling lows thus far.  November has all too familiarly begun with a conference loss.  Nonetheless, Carolina plays the Florida Gators for the SEC East crown this Saturday in Gainesville.  Entering the final quarter of play, here's how the Gamecocks grade out:

QUARTERBACK - B -  Like the team itself, Stephen Garcia has had highs and lows this season, but since critical fumbles at Auburn in, coincidentally, the fourth quarter, Garcia hasn't given South Carolina fans too much to gripe about.  The Gamecocks have the 38th ranked passing offense in the country on Garcia's 2,065 yards through the air.  Garcia has a TD:INT ratio of 14:9, and has also rushed for 4 TDs.  He has a passing efficiency rating that ranks 16th in the FBS and has completed 67.9% of his passes.  Stephen Garcia is having a good year.

RUNNING BACK - B- -  Marcus Lattimore (752 yds, 11 TDs) has been outstanding when he's 100%.  When he's not - other than Maddox's explosive game against Vandy - South Carolina has not been able to move the football.  The team averages less than 150 yards per game, good for 72nd out of 120 FBS teams and 9th in the SEC.  The offensive line is responsible for part of the problem, but we lack a true second threat after Lattimore.

WIDE RECEIVER - A- -  Enough can't be said about the talent of Alshon Jeffery (59 rec, 1,034 yds, 7 TDs).  He's simply awesome.  Big.  Strong.  Fast.  Great Hands.  The catch he made this past weekend in the loss may have been even better than the one in the Alabama game, though that one is certainly more memorable.  "A1" is 5th in the nation in receiving and 1st in the SEC.  Behind Alshon, Tori Gurley (36 rec, 357 yds, 4 TDs) is having a solid sophomore season.  Ace Sanders (18 rec, 212 yds) has been a nice quick and speedy addition to the corps in his true freshman campaign and should only get better.

OFFENSIVE LINE - C- -  This is an improved unit.  They play hard and with discipline, and I love what Shawn Elliott brings to South Carolina.  However, we are still struggling in the run game and have given up 22 sacks (85th nationally and 9th in the SEC).  We are in the bottom half of the FBS and SEC in critical indicators of offensive line performance.  The OL must continue to get better, and I have faith that they will.

DEFENSIVE LINE - A -  The Carolina run defense is the cream of the crop in the Southeastern Conference and 11th in the nation.  The Gamecocks also lead the conference in sacks (32) and rank 3rd nationally.  Devin "Don't Say Nuthin'" Taylor's play speaks loudly (31 tackles, 6.5 sacks, 10 tackles for loss).  Melvin Ingram (19 tackles, 6 sacks, 7 tackles for loss) is quietly having a big year, as well.  When you add senior leader Cliff Matthews (25 tackles, 3.5 sacks, 5 tackles for loss), Travian Robertson (28 tackles, 3 sacks, 8 tackles for loss), and Ladi Ajiboye (30 tackles, 1 sack, 3 tackles for loss) to the mix, you've got quite a formidable foe in front of you if you're an offensive line.  We've finally put a top notch DL on the field and the secondary of the supposed "DB-U" is a complete bust.

LINEBACKERS - C- -  Only two linebackers are in the top ten on the team in tackles, and one of those is ranked exactly tenth.  The loss of Shaq Wilson, the apparent QB of the defense, has been damaging not only to the linebacking regime but to the defense as a whole.  We are hurting at this position right now in terms of being where we need to be with talent and need to fill a recruiting void there.  I recently heard or read somewhere that the coaches are baffled as to why they are struggling to gain commitments from big time LB recruits - it's not like they're not trying.

SECONDARY - F -  The antithesis of the defensive line and the downfall of the defense.  South Carolina ranks 109th in the FBS in pass defense and 104th in pass efficiency defense.  The team is dead last in both categories within the SEC.  I don't know what the problem is back there, but it's horrendous.  Players aren't where they're supposed to be, WRs roam free, and the tackling in run support is embarassing at times.  The close your eyes and dive toward the ground near the runner's feet technique doesn't work and is great only for laughs in the film room.  The play in the secondary is unacceptable.

SPECIAL TEAMS - D -  Spencer Lanning does a nice job punting the football, and he's a pretty good kicker, but he's not been as accurate this year as he or the fans would like (7/11).  The Gamecocks are 114th in the nation and last in the conference in punt returns and 82nd in the nation and 9th in the conference in kickoff returns.  Blocking for the return men in both situations has been poor, and the returners themselves have shown little of flashes of doing something special.  It would be nice to have a kicker that can put it in the end zone with some consistency as well.  Thank goodness this year's group hasn't given up big returns so far, though.

Overall, Carolina comes out with a 2.21 GPA; in the C/C+ range.  Mind you, a C in the SEC is like getting a C at Duke versus getting C at North Carolina - the exams are tougher in our conference than others.  I'm certain we'd fare better overall in terms of performance against lesser competition, but we are members of the best football conference in collegiate athletics and you have to be graded against what you rival.  The bottom line is that the Gamecocks must get better.  This is a very down year in the SEC Eastern Division and South Carolina is staring the failure to take advantage of that right in the face.  It appears to me that the health of Marcus Lattimore is paramount to what success Carolina has in football games.  I sure hope he's good to go on Saturday, and that the team exhibits the focus and determination they displayed against Alabama.  This is the biggest game in the history of Gamecock football.  Not coming away with our best shot to win the East will be painful.  The fourth quarter is still ours to win.  Win this quarter, and the season is a victorious one.