Share All sharing options for: Gamecocks Improve to 22-0 All-time vs. Duquesne, ECU Looms

Opening day weekend saw the Gamecocks go 3-0 against a Duquesne team that was making its last trip to Carolina Stadium. Ever. The Gamecocks performed admirably, outscoring their opponent 28-9. However, the weekend still left fans with a few questions, as every opening weekend always does. For instance, will USC’s bullpen be improved this year? After all, 6 of Duquesne’s 9 runs were scored after the sixth inning – not exactly a ringing endorsement of the Gamecocks’ relief pitchers. The USC starters fared far better, though, never allowing an inning to get away from them. The main question surrounding the starters is whether freshman RHP Tyler Webb will be able to lock down the Sunday spot. If not, we’re looking at a long season of "Sunday-starter-by committee." Questions also surround flame thrower Sam Dyson and whether he will be able to make the same kind of contribution he did last year after coming off shoulder surgery. 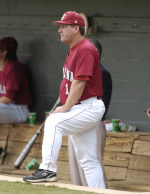 Of course the main question on everybody’s mind is if Scott Wingo will be able to achieve his goal of becoming the most beamed second baseman of all time. Wingo got off to a good start this weekend notching two hit-by-pitches already (or should I say allowing two hit-by-pitches to notch him).

Tanner’s offense didn’t disappoint, either. As it seems is the case every year, Christian Walker exploded in his first series with the Gamecocks to sure up a spot that had previously been a question mark. Even injured Jackie Bradley, Jr. got in as a defensive replacement late in some games, good news for those of us who feared he may be out the better part of two months.

Carolina starts this week ranked #10 by Baseball America and #12 by Rivals.com

With the first series in the books, USC head to this weekend to take on a ranked ECU team. Tanner never has shied away from scheduling strong opponents, and this weekend may very well set the tone for the rest of the season.