Weekend Preview: Gamecocks Host Gators for All the Marbles

Share All sharing options for: Weekend Preview: Gamecocks Host Gators for All the Marbles

Folks, it's been a long road to this weekend. The Gamecocks have played 13 series, winning all but three of them, and with Tuesday's 11-6 victory over Furman, they've also won every one of their 14 midweek games for the first time in at least 40 years. The 2010 Gamecocks are a tough team with the talent and grit to go the distance, and this weekend the race begins in earnest. From here on out, every weekend the Gamecocks will be playing for a crown of one sort or another. On Thursday the South Carolina Gamecocks (42-11, 20-7 SEC) will begin a three-game series with the Florida Gators (38-12, 20-7 SEC) to determine the SEC regular season champion. USC last won the regular season championship in 2002.

The Gators come to Columbia having won their last 12 of 13. As a team, they're batting .304. Senior Matt den Dekker and freshman Austin Maddox lead the team with a combined 28 home runs, 103 RBIs, and 95 runs scored. den Dekker is tenth in the SEC in batting average (.365) while Maddox is fifth in slugging percentage (.671) and fourth in runs batted in (63). The Florida pitchers have posted a respectable team ERA of 3.98 led by junior reliever Kevin Chapman (1.26). Freshman Hudson Randall (2.96 ERA) appears to be the Gators' best starter despite having only a 6-3 record. Alex Panteliodis and Brian Johnson have posted ERAs of 3.34 and 3.53, good enough for 8th and 11th in the SEC, respectively.

Meanwhile, the Gamecocks have been doing their part to remain in contention for a national seed in the upcoming NCAA tournament. Their current winning streak sits at six. Senior SS Bobby Haney has been swinging a hot(ter) bat as of late, hitting .389 with 7 RBIs over the last five games. He has raised his average to .245, well above the Mendoza line with which he was flirting earlier in the season. Oh yeah, he also hit a grand slam against Furman on Tuesday. Outfielder Jackie Bradley, Jr. is tenth in the league in OBP (.459) while Whit Merrifield leads the league in runs scored (64). Whit also leads the SEC in Sac. bunts (13). Again, please don't ask me why Ray Tanner continually has arguably our best hitter getting himself out on a regular basis. I don't have any answers for you. USC's pitching, of course, has been the backbone of this team the entire season. Blake Cooper's ERA of 3.01 is good enough to earn him sixth in the SEC, behind the aforementioned Hundson Randall of Florida. Sam Dyson, coming off SEC pitcher of the week honors for the second time this season, is ninth in the SEC in opposing batting average (.247). Both Cooper and Dyson are tied at fifth for batters struck out (79).

Our Sunday starter is a bit more of a mystery, as has become the custom this season. Tuesday's game looked an awful lot like an audition for the Sunday job since no pitcher was in for more than 3 innings. Jay Brown, despite being pulled after the third inning, surrendered just 1 hit, 1 walk, and no runs. Nolan Belcher was equally strong, going 2 innings while allowing no hits and 2 walks. I wouldn't be surprised if Belcher got the nod this weekend considering Jay Brown's recent struggles. Brown has failed to make it out of the fourth inning in his last three starts. Belcher, on the other hand, had a solid five inning start just last week against Wofford. In that appearance Belcher did not allow a run or a hit, but he did allow four walks. We'll have to wait and see how Tanner plays it. I also wouldn't be surprised he decided to stay with the "by committee" approach he has been taking on Sundays. By that I mean he'll start someone - only to remove them after three innings and make situational changes for the remainder of the game. 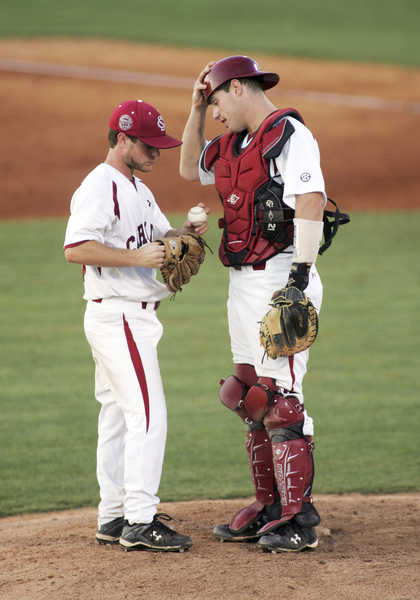 Nolan Belcher: The Little Pitcher That Could. (via media.thestate.com)

This series has major implications for both squads. Obviously, the winner this weekend can claim the SEC regular season title as well of the top seed in the SECT in Hoover. In part because of those two honors, this series also affects the national picture. I am convinced that both teams have already locked up a chance to host a regional regardless of how this weekend turns out. What remains to be seen, though, is whether both of these teams will be able to pull down national seeds. That may still happen if we witness a close series this weekend dominated by good play, and the loser of the series goes on to perform well in the SECT. What I don't know is how the NCAA seeding committee will react if one team loses this series and then goes on to exit quickly in the SECT.

Both teams are ranked highly. Florida is currently #4 in the NCAA's RPI, followed closely by South Carolina at #14. I'm not really sure how these RPI formulas work, exactly, but I'll be honest; I thought South Carolina would be a lot higher than #14 after winning all of its midweek games and sweeping Arkansas in Fayetteville last weekend. In fact, Vanderbilt (#13) and Arkansas (#8) are both ranked ahead of the Gamecocks right now despite the fact that USC won each of those series. Go figure. The human polls have been kinder to the 'Cocks. South Carolina appears as high as #6 (Baseball America and Collegiate Baseball) and as lo as #9 (NCBWA). Florida appears as high as #4 (Baseball America) and as low as # 5 (Collegiate Baseball, USA Today/ ESPN, NCBWA). Win two out of three this weekend and I believe the Gamecocks will have sewed up a top-8 national seed regardless of what they do in the SEC tournament. The Gamecocks lead the all-time series with the Gators 35-26.

One last note about the series this weekend. It starts on Thursday to allow for more rest before the SEC tournament, so don't miss it!